Most people could be forgiven for failing to notice the wineries around Okanagan Falls have become an assembly to be reckoned with in recent years. Unlike more historical marketing groups in areas like the Naramata Bench, Okanagan Falls wineries only banded together very recently. In a few short years as a formal Winery Association this diverse group of businesses are helping place BC wine on the international map, and commanding significant respect and attention in their own right. 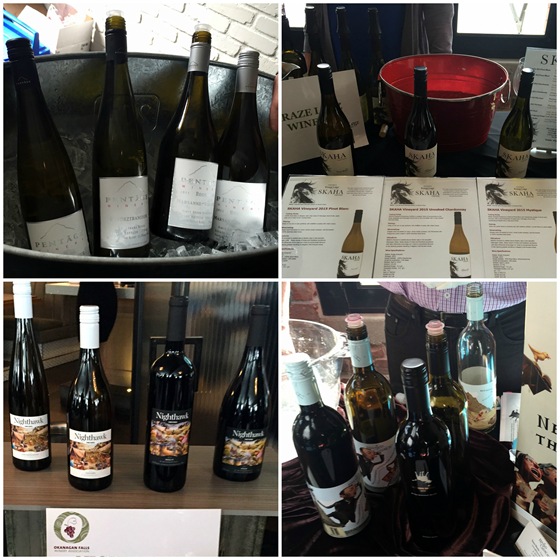 This week the Association hosted their fourth annual trade & media tasting, showing off upcoming and recent releases from the fourteen member wineries in The Loft at Earl’s Yaletown. One admirable characteristic of this group is freedom from some of the political machinations that can distract other bodies, evident by the embrace of Skaha Bench wineries like Blasted Church, Painted Rock, and Pentâge, plus Kaleden concerns like TopShelf and Krâzē Legz. Moreover, the Association continues to grow at a healthy pace, as new wineries such as Nighthawk Vineyards work alongside prominent established businesses like Blue Mountain, See Ya Later Ranch, and Wild Goose. The opportunity to taste wines from these creative ventures and speak with the variety of owners and winemakers was not to be missed. Many thanks to my friend and fellow BC Wine Appreciation Society member Shelley Hayashi for the wonderfully illustrative photos!

The renowned white wines of Wild Goose drew my attention immediately, with additional regard for the maturing red program at the Kruger family’s pride and joy. General Manager Roland Kruger had in hand samples of 2015 Pinot Gris plus Pinot Blanc fresh of this week’s bottling line. The surprisingly perfumed Pinot Gris led into the delicious newly-bottled Mystic River Pinot Blanc, awash in crisp orchard fruit flavours that should continue this wine’s acclaimed tenure. The 2013 Red Horizon Meritage also showed the growing creativity of Winemaker Hagen Kruger, who has deftly blended 55% Merlot, 25% Cabernet Sauvignon, and a hefty proportion of 20% Petit Verdot. Visitors to the winery can also sample varietal Pinot Noir and Merlot to supplement the better known aromatic whites while envisioning a bountiful future for this BC original. 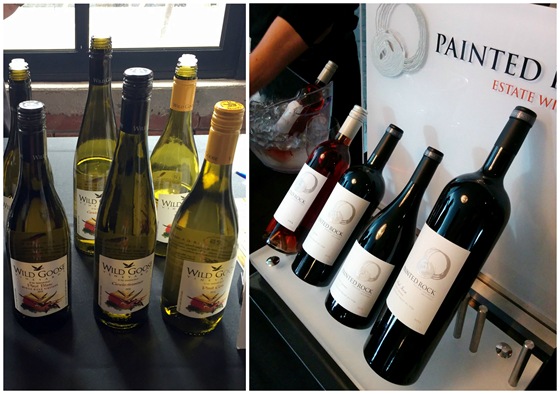 My longstanding, well-deserved favouritism for Painted Rock took me to the table manned by proprietor John Skinner, his daughter (and Business Development Manager) Lauren, plus Senior Sales Consultant Jill Butterworth Penner. All three of these dynamic team members were happy to pour complex 2014 Rosé plus a triplet of intense 2013 reds: Merlot, Syrah, and the sold-out Red Icon blend. The Icon was being poured from the only format that remains available – magnum – while John awaits the appropriate time this summer to bottle his in-demand 2014 vintage. Of particular interest was hearing about a slight increase in new oak for the 2014 reds after years of decreasing proportions, as recommended by consultant Alain Sutre. This admirable responsiveness to vintage conditions is reflective of John’s independent approach to each annual lot (and why the Red Icon is a completely different, delicious blend every year).

At the Stag’s Hollow table, owner Larry Gerelus and winemaker Dwight Sick were pouring the embarrassment of riches that is their portfolio as of late. Despite the suggested four wines per table, I counted at least double that from this supremely adventurous winery, soon to present pioneering varieties such as Teroldego and Dolcetto, in addition to existing, finely crafted rarities like Albariño, Grenache, and Tempranillo. New this year is also the Muscat Frizzante, smoothly spritzy and packaged under practical screwcap to ensure easy enjoyment over the summer months. Rather unexpected but desirable interpretations of (barrel-fermented) Sauvignon Blanc and rare Osoyoos-grown Riesling were also serving to throw guests for an enjoyable loop. Fans of creative winemaking with an ever-present focus on quality would be wise to join the Stag’s Hollow Wine Club, soon to be blessed with exclusive varietal Malbec. 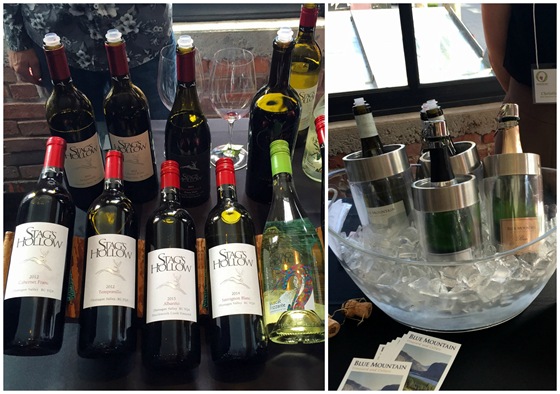 Blue Mountain is one of British Columbia’s oldest wineries, having virtually defined BC sparkling wine (not to mention Burgundian varieties) for decades, thanks to “43 years of continuous grape production by one family.” Christie Mavety was available alongside Keystone Fine Wines representative Christine Fawcett to remind those present that her family’s focus on estate-grown excellence remains strong, while pouring the well-known “Gold Label” Brut as well as mouth-watering 2008 Blanc de Blancs. The vintage bubbly represents a move by the Mavetys to further develop their portfolio in recent years, with a total of four sparkling wines that include impressively-aged Reserve Brut (e.g., 2007 at present) in addition to existing vintage Brut Rosé. Meanwhile, the 2014 Pinot Blanc and Chardonnay varietals being poured were simply icing on the cake that included the highly impressive Pinot Noir.

Efforts to ensure early bottling at Liquidity Wines allowed for Customer Experience Manager Erin Korpisto to show off 2015 Pinot Gris as well as the straight-forward “White Blend”; with the Blend providing a surprisingly well-aligned composition of 32% Chardonnay, 30% Viognier, 20% Pinot Gris, and 18% Sauvignon Blanc. A pair of Pinot Noirs provided insight into the red program that should soon see an additional third reserve tier added to the existing “Select” and “Estate” Pinot. At the same time the 2012 “Dividend” red was showing lovely integration, featuring a traditional Right-bank Bordeaux configuration favouring 72% Merlot. Later this year the new 2014 Dividend will provide a glimpse of the delicious possibilities in a Cabernet Sauvignon-dominant blend. 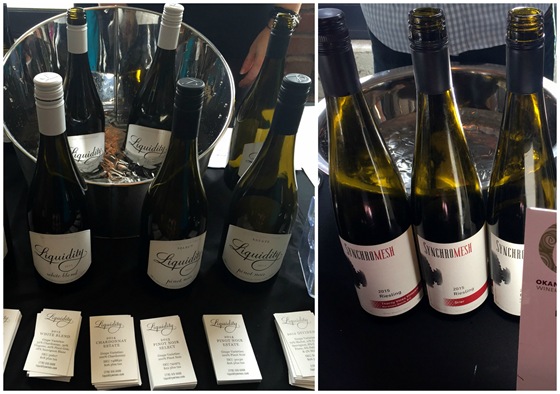 The bonanza of Riesling from Alan Dickinson’s Synchromesh continues to grow, and he was happily pouring several different vineyard-specific examples from the 2015 vintage. The entry-level blend of all four vineyards has been joined by a similar version labelled simply “Drier” with 27 g/L of sugar to the former’s 34 grams. The sugar levels for 2015 peak at nearly 51 grams from the Four Shadows Vineyard outside Penticton, but acidity serves to sufficiently balance each wine, including that from the flagship Storm Haven Vineyard home property. Particularly appealing was a 2013 Botrytis-affected Riesling produced in a surprisingly dry style, providing the complex Botrytis flavours without a sugar rush to distract the palate. I was also enamoured from the get go with Alan’s new Cabernet Franc Rosé, a bone dry, 11.3% alcohol beauty with delicate colour and precise texture, and of which there were only 88 cases produced.

The personal touch was present again from Noble Ridge owners Jim & Leslie D’Andrea, on hand to discuss their fifteen-year-old winery and stunning estate vineyard overlooking Vaseux Lake. Crisp 2014 Pinot Grigio provided a lip-smacking homage to Jim’s Italian roots, while 2012 Reserve Chardonnay was everything a Chard-fan could hope for with velvety toffee flavours. The 2013 Reserve Pinot Noir and Meritage greatly impressed me, particularly as they represent only the middle-tier bottlings, with the highly infrequent “King’s Ransom” series a further step up in quality and exclusivity. Even better news came regarding newly released 2011 “The One” sparkling, a 220-case-lot successor to last year’s Lieutenant Governor’s-Award winning 2010 vintage. Leaving estate Pinot Noir and Chardonnay for forty months en tirage via traditional method production should provide another success story in the coming year. 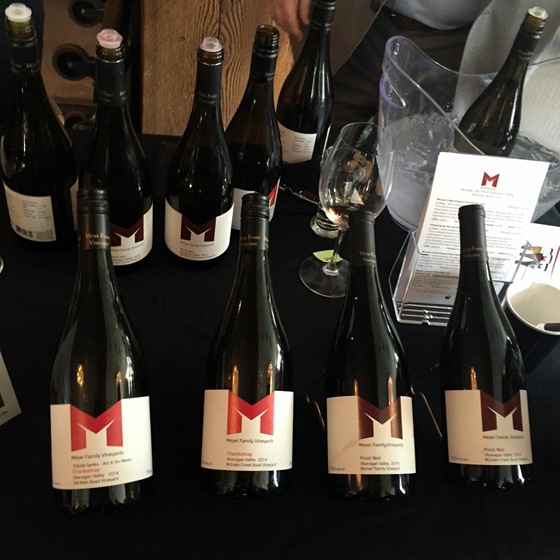 Before departing I ensured another taste of Meyer Family Vineyards’ Chardonnay and Pinot Noir, after having sampled the same wines at the recent Vancouver International Wine Festival. While Jak & Janice Meyer could not be present, their small lot whites and reds were poured instead by friendly International Cellars representatives. The pairs of single vineyard Chardonnay (Old Main Road & McLean Creek) and Pinot Noir (McLean Creek & Reimer) all came from the newest 2014 vintage release. As with my experience at VIWF I felt that all four called for more time to mature, albeit intense and expressive at present. Giving Winemaker Chris Carson’s complex Burgundian varietals time in the cellar can be highly rewarding, and the reason I have yet to open 2012 Chardonnay and even some 2008 Pinot Noir.

Although I failed to reach each and every table and taste all the wines available from this continually-growing collective I was given a chance to reflect on how many of my favourites wineries can be found in this relatively unassuming part of wine country. Fortunately regular visits and club shipments ensure I maintain a steady supply at home. The enviable position of Okanagan Falls mid-valley actually makes visiting surprisingly easy – it can be reached in one hour from Kelowna and a mere 30 minutes from Osoyoos and the Canada-US border. I’ll be back again soon, and am grateful to the Okanagan Falls Winery Association for providing yet another reminder why it’s wise to visit often!