Buds are already starting to show on the grape vines as wine country wakes from winter’s slumber. I received three club shipments this month as spring operations begin alongside the 2016 vintage. A few club reds were combined with some gems I brought home from the Vancouver International Wine Festival to yield a healthy compilation of collectibles. Some of the local Wine Festival wines are not yet released to the public, having been sold in limited quantities exclusively at the Festival store, but as wineries open their doors this month and next availability will increase dramatically. 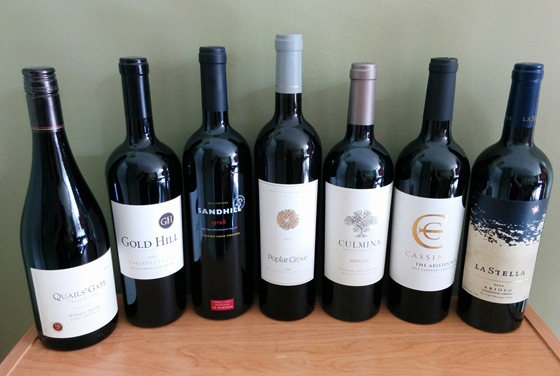 Gold Hill 2013 Cabernet Franc: The first release from 2009 won this new Golden Mile winery (from experienced wine growing brothers Sant and Gurbachan Gill) a Lieutenant Governor’s Award and multiple high accolades. I was excited to find the Gill family manning the booth at their first Vancouver Wine Festival, and soon found myself under the spell of their impressive Cabernet Franc’s newest vintage. The beautifully aromatic nose brought me back repeatedly for another sniff, and the luscious texture solidified my purchase decision. The solid value price of $27 at the winery will keep Gold Hill well within the ranks of local Franc producers to watch. VIWF Store $29

Sandhill 2013 Small Lots Syrah: The legendary Syrah that Winemaker Howard Soon crafts from the Phantom Creek Vineyard on Black Sage Bench is always in high demand, and seldom seen in stores. Shortly after the newest vintage was released last September it was awarded a prestigious Platinum medal at the Okanagan Fall Wine Festival’s BC Wine Awards. Surprisingly it took until now to sell out at the winery, particularly given that only 250 cases (fresh from 14 months in new American oak) were produced. I spent the autumn fruitlessly scanning shelves in every wine store I entered, being unable to visit the Kelowna tasting room in person this year. Imagine my surprise when I recently came across a single bottle on the shelf of my local BC Liquor Store. BC Liquor Stores $41

Poplar Grove 2012 CSM: A spring release red available to Wine Club members, the CSM tends to fly a little bit under the radar given the popularity of the winery’s Merlot, Cabernet Franc, and The Legacy icon red blend. CSM is produced in relatively small quantities, and typically exclusive to the winery tasting room, with Club members getting first crack at it upon release. This year’s blend is primarily Merlot (51%) and Syrah (41%), with 8% Cabernet Sauvignon bringing up the rear. The three grapes were naturally fermented, separately, and aged for 21 months in French oak before another year of bottle aging. Like most of Poplar Grove’s reds it is an excellent cellar candidate, with the winery suggesting up to decade from vintage. Winery Direct $35

Culmina 2013 Merlot: Owners Don & Elaine Triggs and daughter Sara were all present at the recent Wine Festival, showcasing their young Golden Mile winery’s first single-varietal reds. The gorgeous floral blueberry nose and palate of the Merlot caught my attention immediately, sending me dashing to the on-site store for a bottle (from only 168 cases). Having sampled the wine just before the Festival, John Schreiner complimented the “voluptuous texture” in his enthusiastic 92-point review. The Triggs were also pouring samples of the equally new Small Lots Cabernet Sauvignon, well-structured and complex with great aging potential: had any of the 96 cases been for sale on site I certainly would have snagged a bottle! VIWF Store $35

Cassini 2012 “The Aristocrat” Cabernet Sauvignon: I received the valuable opportunity to taste this superb wine at the winery over New Year’s, during a visit with the BC Wine Appreciation Society. Despite the highly appealing concentrated, ripe dark fruit (from an Osoyoos East Bench vineyard), I initially hesitated to buy given the preponderance of 2012 wines overflowing from my cellar – including Cassini’s equally exciting Cabernet Franc. By March I had reconsidered – especially given how few retail stores feature this rarity (only 190 cases were produced after selecting 8 barrels from amongst 45). Highly affirmative reviews – such as John Schreiner’s praise for the “rich and polished texture” – have helped encourage me to find a spot amongst the other excellent 2012 reds. Swirl VQA Store $47

LaStella 2012 Arioso Sangiovese Grosso: The production of a premium Brunello-style Sangiovese from this outstanding Italian-inspired Osoyoos winery has long been the hope of their many fans. For years a small proportion of Sangiovese went into the “Fortissimo” Super-Tuscan blend, but in 2012 sufficient volume was apparently available to bottle a single select barrel (25 cases) as a rare pure varietal wine. Even more than three years after harvest it remains a (stunningly aromatic) beast of a wine in the eyes of winery staff, who haven’t yet decided on a formal release date given the decades they believe it could age. Those bottles not yet allocated to the winery’s elite Wine Society could begin trickling out later this fall, assuming any remain unspoken for. An ultra-rare collector’s item worth every penny for BC wine adventurers. Winery Direct $69