An earlier post detailing this year’s Vancouver International Wine Festival focused on the four BC wineries sharing their wares for the first time. With 22 additional local wineries (and one superb Sakemaker) on hand as well, there was more than enough to keep my attention for three days. Dozens of veteran winery principals from across BC were equally enthusiastic as those pouring for their first time. Given the alphabetical organization I generally explored our local wineries just as they were laid out, and found everything from Averill Creek to Wayne Gretzky Estates.

My first sample of the entire Festival came from Andy Johnston’s Averill Creek, where Pinot Noir is king in Vancouver Island’s Cowichan Valley. The 2012 being shown was impressively clean and pure – with its still-upcoming release status testimony to Andy’s patience as he continues to let the 2011 shine. I came back more than once too for a glass of apples and creamy raspberry scones in the 2010 Brut, another very charming preview. Three tables down, Burrowing Owl owner Chris Wyse had a bevy of rich reds on hand, plus the 2014 vintage of his winery’s famed Pinot Gris. Age-worthy 2012 Athene (Cab-Syrah) and 2012 Meritage impressed just as much as dark and ripe 2012 Cabernet Sauvignon and surprisingly silky 2013 Cabernet Franc. Steps away, the Triggs family was present in force to pour the wines from their blossoming Culmina project, while Winemaker Pascal Madevon discussed the winery’s new varietal reds in detail. The dry and focused 2014 Decora Riesling and toasty, citrus-mineral 2013 Dilemma Chardonnay complemented the complex and collectible small lots of 2013 Merlot and Cabernet Sauvignon (168 and 96 cases respectively). 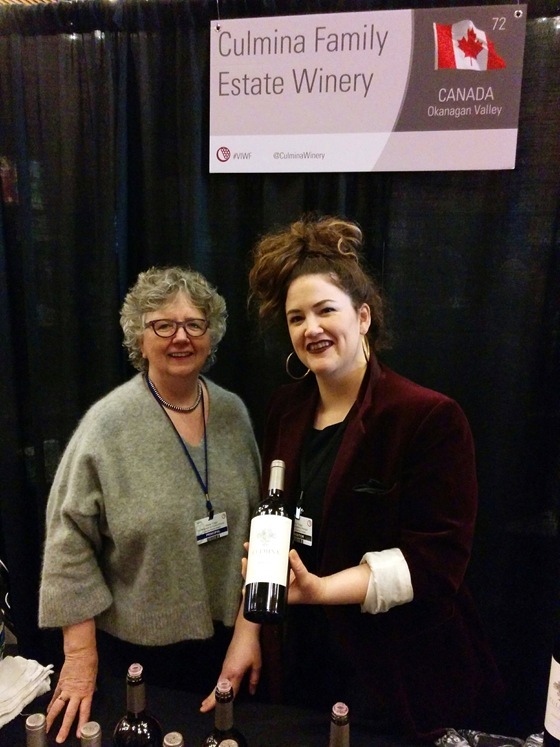 Okanagan Crush Pad’s Chief Winemaker Matt Dumayne was pouring the Summerland winery’s home label Haywire. The likeable traditional method sparkling “The Bub” 2013 was available alongside organic 2014 Pinot Gris and the fascinating Free Form 2014, a naturally-fermented blend of Sauvignon Blanc and Chardonnay. Eight months of skin contact and full malolactic fermentation without any sulphur made this risky venture into a “textural sensation” of dry citrus flavours and fine tannins. Behind Haywire Head Winemaker Rob Summers had a selection of Hester Creek’s wine on hand, showing the benefits of increasing oak integration in his bottle-aging 2012 reds. Time in bottle has given the ripe fruit an opportunity to emerge in smooth Reserve Cabernet Franc as well as in brown-sugar-spiced icon blend The Judge. The new 2015 Trebbiano continues the grape’s Golden Mile success story, where 48-year-old vines consistently produce refreshing fragrances and long, soft fruit flavours.

Nearby, the wines of Meyer Family Vineyards provided a study in 2014 single-vineyard Chardonnay and Pinot Noir courtesy of Winemaker Chris Carson. Kelowna’s Reimer vineyard yielded a bright, youthful red fruit Pinot Noir and Naramata’s Old Main Road vineyard offered creamy Chardonnay with fresh tree fruit flavours. From the Okanagan Falls home vineyard on McLean Creek Road, young, mineral-driven Chardonnay and rich, dark fruit Pinot Noir will grow even better with age if given the chance. Across the aisle Lauren Skinner and the team from Painted Rock had the rare and special 2014 Chardonnay along with elegant, complex 2014 Rosé – a blend of red Bordeaux grapes. Lauren was leading the charge at her family’s sixth consecutive Festival appearance, showcasing the newest 2013 reds: suave Syrah, brooding Merlot, and the stellar Red Icon beckoned me daily.

Well within reach the synchronized squad at Poplar Grove was where Winemaker Stefan Arnason could be found with the winery’s champions. Newly-bottled, ever-popular Pinot Gris gushed fresh stone-fruit, and similarly modern Blanc de Noirs blended big reds to yield candied pink grapefruit aromas and earthy red fruit flavours. The allure of sold-out 2011 The Legacy offered up a perfumed leather nose before a smooth spicy finish; patience is a necessity for those awaiting the bottle-aging 2012. Neighbouring tablemate Tony Stewart was offering the expression of 2014 at Quails’ Gate, introduced by uncommon Chenin Blanc, refreshing one’s palate with crisp textures and a tangy finish. The Stewart Family Reserve Chardonnay made subtle use of oak in a creamy, toasty drop delivering a bright finish, while textbook Reserve Pinot Noir displayed perfect balance surrounding cloves and red fruit. Turning around brought the Summerhill smile of CEO Ezra Cipes and the exciting new Blanc de Franc 2011: sparkling Cabernet Franc repeatedly enchanted me with fresh fragrant berries and a fabulously smooth, clean mousse. 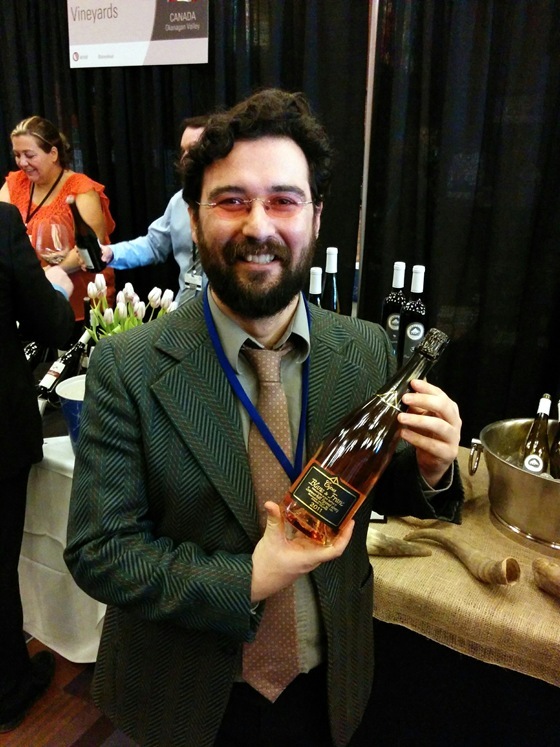 The final line of BC wine was home to Thornhaven Winemaker Jason Fraser, revitalizing guests with 2014 Brooklyn’s Blend, Summerland’s unique merger of Sauvignon Blanc and Chardonnay. This clean and summery field blend was took on the new name in honour of the Fraser family’s newest addition. Apart from the winery’s definitive Gewürztraminer I was also taken with the elegant 2013 Syrah, thanks to a silky, earthen palate and well-tuned balance following the Platinum-winning 2012. It was only logical to next make time for Harry McWatters, still working his magic on the Black Sage Bench at TIME Estate Winery. The pleasingly approachable 2012 Red Meritage was nicely softened after a couple years in bottle, and the charmingly textured 2014 White Meritage provided another measure of the creamy character I’ve enjoyed in the past. A jump to the right found Tinhorn Creek Winemaker Andrew Windsor proud papa to barrel-sampled 2014 reserve Chardonnay. Andrew’s first vintage at Tinhorn yielded such divine wine it demanded a new addition to the Oldfield Series tier. The necessity was obvious upon tasting the round, rich, creamy caramel behind the newly deployed “Golden Mile Bench” sub-appellation label. 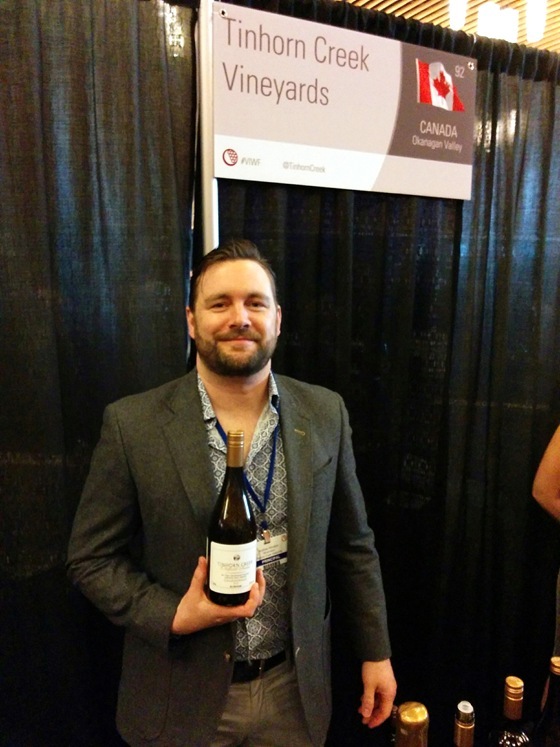 The “big three” beverage companies were present as well, but I found myself drawn primarily to the smaller independent wineries. That being said, it was good to see that parent company Peller had arranged for Sandhill Master Winemaker Howard Soon to give the international guests a little something to think about with 2012 Small Lots Sangiovese and Italian-inspired red blend “Three”. Mark Anthony Group’s Mission Hill rarely misses a Wine Festival, and this year freshly appointed Head Winemaker Darryl Brooker was present to pour a gamut of rarities from the new, high-end Terroir Collection. Constellation Brands’ Black Sage Vineyard was showing off an impressively fragrant 2013 Zinfandel, while the company’s See Ya Later Ranch property poured the peppery 2013 Rover Shiraz. The conglomerate’s Jackson-Triggs “Sunrock” brand had more Zinfandel blended with Shiraz in the “Illumina”, as well as a two-vintage comparison of the well-respected Cabernet Sauvignon (2012 & 2013).

The only session in the Tasting Room for which I was absent was the final evening on Saturday, which generally provides the most entertaining people-watching if anything. Of course that final session is also where the next year’s theme region is announced, so I was thrilled to hear the good news in short order over social media: the 2017 Festival will feature Canada as theme region, just as our nation begins celebrating its sesquicentennial. My very pleasant surprise at the news came about in large part due to earlier discussions with members of the organizing committee, who had suggested to me that certain challenges precluded such a possibility. Apparently the difficulties were overcome through what must have been hard work and delicate negotiations. The growing ranks of Canadian wine aficionados worldwide must be excited at the opportunities that will come about in Vancouver next spring – I know I’ll be first in line for tickets!