In a return to form after a year of festival-style events and dinners, the BC Wine Appreciation Society sat down for a portfolio tasting of a single winery this month, hosting Derek Uhlemann from Covert Farms Family Estate. As winery Sales Manager (and Farm Chef) Derek is well versed in the full range of wines available from the Covert family’s 25-acre organic vineyard and namesake winery at McIntyre Bluff. Derek’s digging in the cellar provided a sold-out crowd with the opportunity to taste aged examples as well as brand new barrel samples. 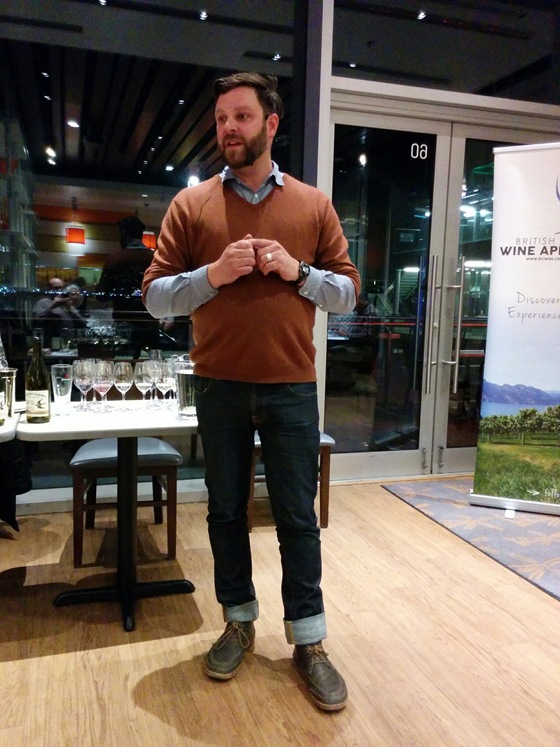 The youthful 2015 vintage was first out of the gate with a Sparkling Zinfandel, a crisp naturally fermented creation that carries the Méthode Ancestrale nomenclature. As Derek explained, the low-Brix, trimmed shoulders from maturing Zinfandel clusters were put to use making a small lot of 9.9% alcohol bubbly, and guests got a chance to relish the bright cranberry raspberry results. The sparkling provided a good backdrop for Derek’s historical recollection of the more than half-century-old homestead founded by California tomato farmer George Covert. George’s grandson Gene and his wife Shelly now manage a comprehensive farm that spans 650 organically farmed acres.

Although the 1970s and ‘80s saw Covert fostering nearly two hundred acres of hybrid grapes to yield “unremarkable ‘Chateau Okanagan River Channel’ wines,” today is a much different story. Gone is the “White Diamond” in favour of much more exotic (and palatable) white varieties such as Semillon, Viognier, and Roussanne. Thanks to Derek’s cellar sleuthing, there was the opportunity to enjoy a four year vertical of the Amicitia White blend following the newest 2014 Sauvignon Blanc-Semillon. The vineyard’s pure sand bench yields a mineral and citrus presentation of Sauvignon Blanc; blending in 20% Semillon provides body that complements the fresh and tart, traditional grassy character. 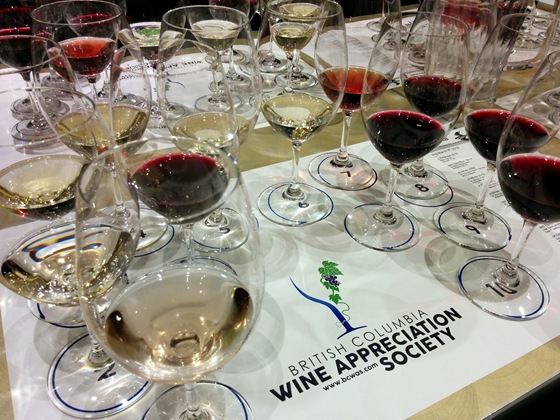 A small percentage of both Semillon and Sauvignon Blanc is included in the Amicitia White but this rare blend is predominantly Rhone grapes, with Roussanne unexpectedly leading the way over and above Viognier’s smaller contribution. Although a handful of 2007 and 2009 Amicitia was discovered at the winery, only a batch of unlabelled 2008 made it through the years in drinkable condition. As a result a comparison was available for a relatively aged version against the more recent 2012-2014 vintages. Oxidative, Sherry-like character was readily apparent in the golden, straw-coloured older wine, with an intensely flavoured, viscous palate present upon tasting. The younger vintages showed Roussanne’s strong influence, presenting stone fruit flavours of yellow peach amongst hints of greenery and even petrol, with mild tannins and a similar generous body.

Before delving into several red bottle and barrel samples there was a moment to appreciate the 2014 Rosé, a blend of 76% Merlot, 22% Pinot Noir, and 2% aged Syrah. The small component of Syrah comes from the 2013 vintage to add additional complexity to the wine, well within allowable blending boundaries. The same long finish offered by the whites is present in the Rosé’s food friendly palate, with leafy red fruit flavours of wild strawberry. More of that same Syrah is found in the 2013 “MDC”, a blend of 54% Cabernet Sauvignon, 25% Zinfandel, and 21% Syrah. The jammy, rich palate, and peppery, toasted cocoa flavours seem like a superb tribute to Winemaker Gene’s late father, Michael Dunham Covert, a Cabernet aficionado for whom the wine is named. 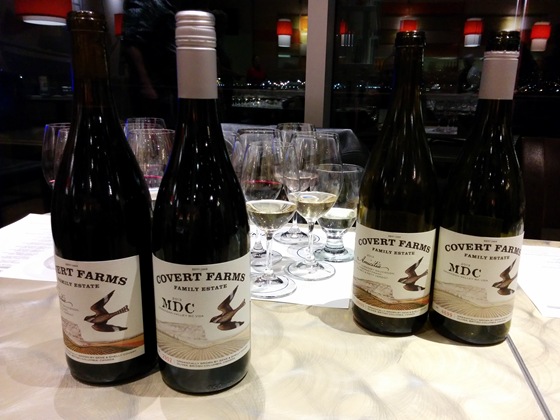 One red blend isn’t enough for Covert Farms however (and in fact neither is two – they also produce a Cabernet-Petit Verdot – “The Bluff”). The Amicitia Red further demonstrates the range of grapes grown in just twenty-five acres, this time assembled into a traditional Bordeaux configuration. The 2013 vintage poured reflected an increase in Merlot now that the winery produces varietal Cabernet Sauvignon, bringing together 52% Merlot, 18% Cabernet Franc, 17% Cabernet Sauvignon, 7% Malbec, and 6% Petit Verdot. The result is a nicely balanced, fruit forward, and understandably complex medley of juicy fruit.

A three-year selection of barrel samples awaited the conclusion of the tasting: Derek had brought everything from the newly bottled 2013 Grand Reserve Zinfandel to the fledgling 2015 Grand Reserve Merlot, a blockbuster of nutty blueberry jam just beginning a long slumber in used French oak. The ripe and rich Zinfandel follows up the inaugural 2012 in the stylishly-labelled Grand Reserve series, and should prove very popular upon its September release to the growing waiting list. The parallel series of Grand Reserve Cabernet Sauvignon skipped 2013 and will follow its first vintage with the sophisticated 2014 sample we tasted, showing off archetypal black currant and eucalyptus notes from an elegant texture with impressive potential.

The Society’s much appreciated volunteer pouring crew was reminded of the work involved in clearing several hundred glasses as the evening wrapped up, it having been several months since the last sit-down event of this magnitude. Following a few final sips over order forms, guests left expressing their gratitude to Derek for sharing these exciting wines so generously. Covert Farms’ inventory was surely shrinking just as their waiting list was growing by the end of this tasting!