Coinciding with the release of young Lunessence Winery’s first dessert wines came a very fortunate bit of good news this month: a prestigious Lieutenant Governor’s Award for the 2014 Riesling Icewine. This highly publicized award must be particularly exciting and valuable for such a new venture – as the Summerland winery only opened for business last summer. Still, given the number of new wineries opening throughout the province Lunessence is already far from the most youthful. The initial release of a few 2013 reds means the winery is technically approaching its fourth vintage, despite being founded in 2014. With this year’s release of an expanded portfolio Lunessence is continuing to put down roots in the speedily solidifying Bottleneck Drive wine trail. 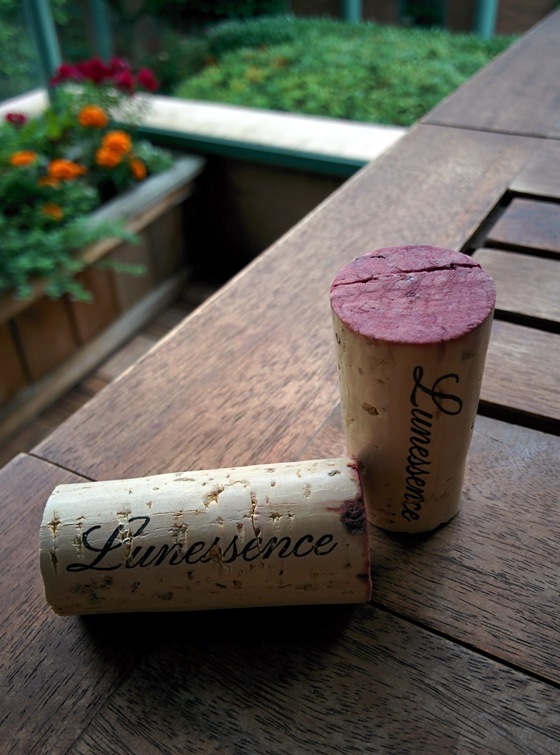 Author John Schreiner provided a detailed history of the Summerland property on his blog late last year, including its origins as Sonoran Winery, recent purchase by a Vancouver environmental consultant, and hiring of General Manager Michal Mosny. Upon release of the new vintages I was contacted by Michal seeking comment on the wines: seeing as he also manages the vineyard with his wife Martina, and makes the wine as well, Michal has quite a bit riding on the winery’s success. I was grateful to receive samples of several new table wines from white to red, with no conditions apart from honest opinion. I assembled several oenophilically inclined friends for a weekend tasting panel eager to explore a winery new to us all, and we dove in with thoughtful gusto.

The newest 2015 white wines include a pair of creative blends made with several varieties from the Naramata Bench (much of the Summerland estate production is used for dessert wines). The “Sauvignon Blanc-Muscat” is quite a handful that includes Viognier, Chardonnay, and Semillon as well, but struck me as most reminiscent of the quality local Sauvignon-Semillon such as that celebrated at Howling Bluff. Grapefruit, honey, and spices on the nose led into passionfruit flavours and a slightly short apple-citrus finish. The light but creamy palate benefits from four months on the lees, and makes for a charming summer sipper in particular. A second blend adds some late harvest Pinot Blanc to acidic Oraniensteiner, a German-engineered child of Riesling and Sylvaner. The clean, fresh nose shows citrus and stone-fruit with enjoyable candied pineapple on the palate. Twenty-three grams of residual sugar are well integrated, and thoroughly chilled make for another dangerously drinkable patio partner (with only 12.5% alcohol). 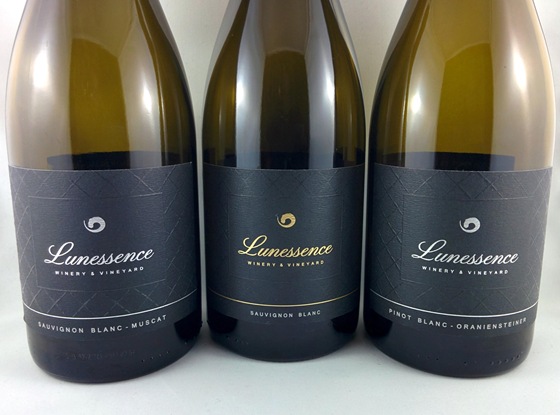 A third new 2015 wine came in the form of a voluptuous Rosé combining 70% Cabernet Franc from Osoyoos with 30% Pinot Noir from Naramata. On the nose it’s all rich strawberry watermelon, and the 22 grams of sugar are surprisingly decently balanced by a long, tart strawberry finish with a cran-apple juice reminder. Several summer suggestions come to mind in the vein of pub patio food: nachos, fried chicken, or a rich and complex salad. I’ve since learned of another 2015 aromatic blend of Riesling, Viognier, Gewurztraminer, and Muscat but did not get a chance to taste what appears to be the new flagship (800 cases almost surpass the total of the other two whites plus the Rosé combined).

From the 2014 vintage Lunessence produced small lots of varietal Sauvignon Blanc, Riesling, Gewürztraminer, and Chardonnay, and I received the opportunity to sample the former a year in to its life. The Sauvignon Blanc was harvested from a southern Okanagan vineyard at the beginning of October, kept on the skins for 24 hours, and partly wild fermented. Thirty percent was aged in new oak barrels for five months to yield what was the most well liked white in the bunch. The tropical aromas were far from grassy green, with the sweet citrus of Mandarin oranges to boot. The dry palate brought out more Mandarin within excellent balance and a deliciously clean texture and faintly floral finish. At $28 (and only 80 cases produced) it’s not a wine for careless quaffing, but nevertheless would be sublimely refreshing on a hot summer day. 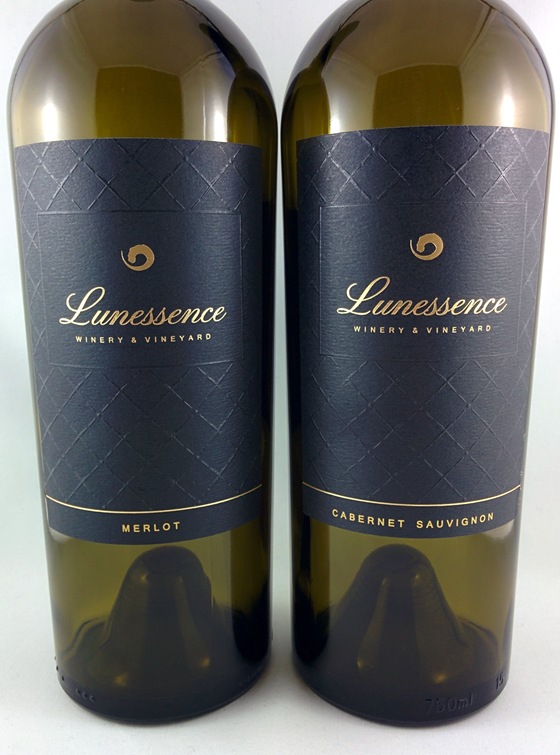 The Summerland vineyard reportedly includes both Merlot and Syrah, but so far the two red table wines come from the Golden Mile Bench. (An estate Late Harvest Syrah from 2014 was recently released in small quantities, with 95 g/L of sugar thanks to a mid-December harvest.) Two hundred cases of 2014 Merlot came from fully ripened fruit at 27.5 Brix (shockingly, picked October 6) and aged for six months in new Slovakian, Hungarian, and French oak and then six in steel. Michal appears to favour Slovakian oak having been born and raised there, fortuitously putting him on the cutting edge of winemakers increasingly experimenting with Eastern European wood. A hefty 14.5% alcohol was apparent on the nose, mixed with the typical blueberry aromas of the variety. The palate was surprisingly thin given the stated full malolactic fermentation, very ripe with earthy dark berries and toasty leather. However, some bitter tannins left us wondering how it could show better with more time in bottle.

Given the oft-stated challenges in properly ripening Cabernet Sauvignon in much of BC we approached the young 2014 single varietal with some trepidation. Similar to the Merlot, fermentation and aging included Slovakian and French barrels, one third of it neutral, within the same six and six combination of oak and steel (yielding 330 cases). Given my wife’s green pepper sensitivity she was eager to report not a hint in the Cabernet, and we joyously celebrated the rich black currant nose accessorized by molasses and vanilla custard. A few bitter tannins like the Merlot were easily surpassed by the rich Black Forest cake profile and cracked black pepper on the finish – in perfect parallel to what we later found in Michal’s own tasting notes. With a reasonable 13.5% alcohol the “fireplace-friendly” Cabernet received universal acclaim within our group, and the approachable price of $27 came as a further pleasant surprise.

I haven’t had a chance to sample the award-winning Icewine, or the Syrah and an additional Pinot Blanc Late Harvest – all from the 2014 vintage. Given the previous owners’ emphasis on dessert wines (at Sonoran) Lunessence certainly comes by the style honestly, and I would expect to be further impressed given my experience thus far. I look forward to visiting the winery in the near future and exploring the appealing eco-friendly biodynamic vineyard and restored wetlands. In the meantime I’m pleased to learn many of the wines we enjoyed are showing up in VQA stores already, and the winery publishes a diverse list of additional locations beyond the newly renovated tasting room (with expansive patio) and wine club. The Summerland scene seems well served by the care and creativity shown at Lunessence.