After a day in the beautiful Similkameen Valley the BC Wine Appreciation Society devoted the second half of their annual Bus Tour to the South Okanagan. Sunday would see the sold out tour circulate amongst five wineries between Oliver and Osoyoos, visiting both sides of the valley on the Black Sage and Golden Mile Benches. As with the day before, an early start was critical to keeping us on schedule and leaving enough time for all the appreciation to come! 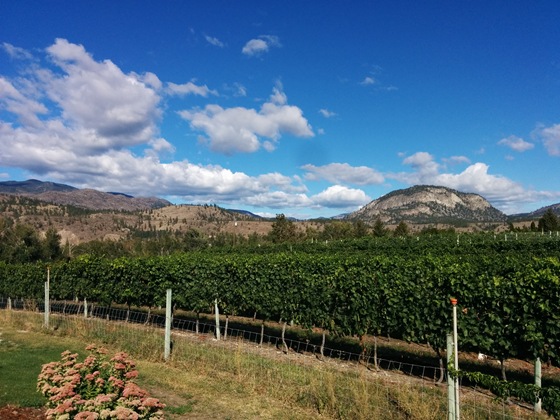 As the sun flirted with clouds we arrived at River Stone Winery just north of Oliver for a morning vineyard tour. Owners Ted & Lorraine Kane provided an enthusiastic welcome with glasses of 2015 Pinot Gris and Ted’s self-deprecating take on his vineyard: “A gravel pit owner’s dream!” Ted’s work in the vineyard and cellar seeks to protect the aromatics of his dry, mineral-drive whites: the green apple, apricot, and pineapple of the Pinot Gris served as a perfect introduction. While contemplating a block of Cabernet Sauvignon vines grafted to Gewürztraminer, we sipped the 2014 Stone’s Throw red blend, young and fresh with a fruit leather nose and palate of toast with jam. Upon reaching the centrally-located winery, tasting room, and home of the Kane family, we were treated to the flagship “Cornerstone”, sampling the current 2012 and library 2010 vintages. The dry and structured dark berry and mocha profile of this Merlot-heavy Bordeaux blend makes it a superb cellar candidate, as the 2010 hinted at with nicely developing secondary characteristics. 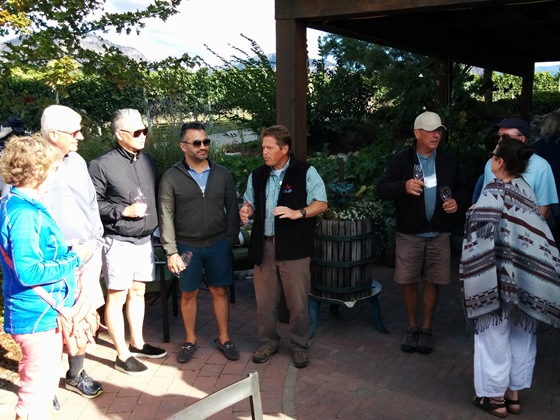 Dragging the fawning tour group away from the Kanes’ Golden Retriever trio brought us to Quinta Ferreira a few minutes south. Owners John & Maria were happy to share the wines that son Michael has crafted to celebrate the family’s Portuguese heritage. Starting with dry, tart pineapple in 2014 Riesling we moved quickly to the popcorn and vanilla in 2014 Chardonnay before reds were introduced. An aged 2012 Merlot provided restrained tannin and toasty oak, with a juicy finish and hints of cocoa and spice. “Obra-Prima” is (literally) the “masterpiece”, given generous bottle age before release to ensure it impresses with immediacy. The 2010 vintage on hand was aged more than two years in 40% new oak, where the five traditional Bordeaux varieties intermingled to yield aromas of olives and sweet coffee before still smoothing tannins led to herbal cassis on the palate. Moving to the tasting room provided a chance to stock cellars and admire the local art for sale, while more of the regions pervasive pups searched for favour. 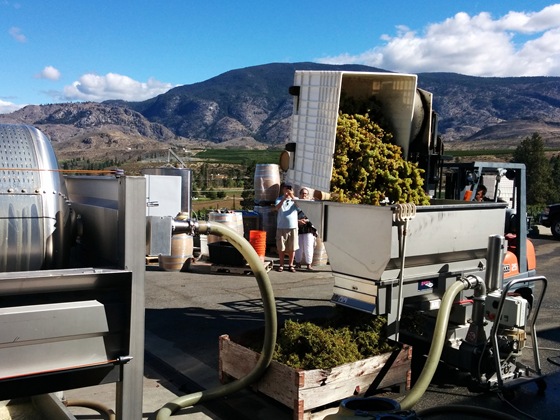 The day’s defining winds picked up as we arrived at Church & State on the wider valley floor of the central Black Sage Bench. Marketing Manager John Pullen escorted us to the outdoor tasting bar, where we were hugely honoured to receive some of the first samples of the esoteric and exhilarating 1999 Sparkling. A mere 1,600 bottles exist for upcoming release, an inherited niche project using Cowichan Valley Pinot Noir initiated before Church & State was even founded in its current form. The mature, yeasty aromas and enthusiastic mousse of the citrus-driven palate led into an extremely long, thought-provoking finish - a taste of BC wine history rarely experienced. 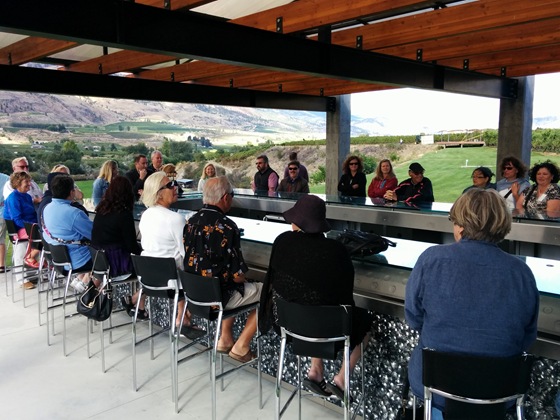 For a more recent examination we turned to 2013 Coyote Bowl Chardonnay, delicate and floral but deliciously complex with minerality amongst caramel apples, popcorn, and lemon curd. From the same vineyard and vintage Merlot provided dark, structured blackberry and currants at the beginning of its long life. Syrah from the newly acquired Second Chapter Vineyard came next, with meaty, leathery character in the cherry-flavoured palate. As a final treat, 2010 vintage Cabernet Franc showed off a powerful, full-bodied profile with years ahead of it given the generous tannins that remain. 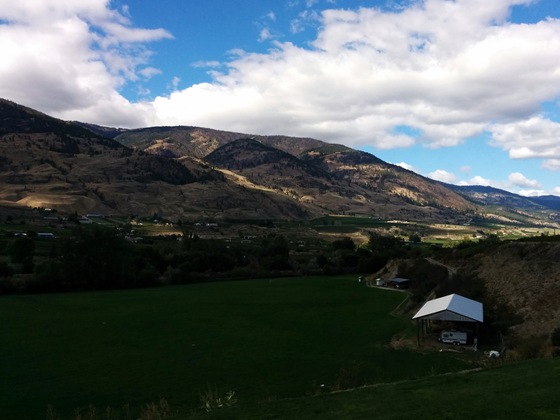 Braving the glass-smashing winds we sat for lunch on the grassy knoll above the Coyote Bowl itself, where long-time Society friends Joy Road Catering presented a pair of courses with Church & State’s brand new Signature Series wines. Paired with Smoked Trout or Warm Goat Cheese the upcoming 2015 Trebella impressed via an unusual and complex blend of 62% Roussanne, 28% Marsanne, and 10% Viognier. From the winery’s Bella and Second Chapter vineyards on the Black Sage Bench the rich texture included elegant toasted honey and stonefruit flavours. Our entree offered Polenta & Rainbow Chard with locally sourced lamb or mushrooms, and plenty of intense 2014 Syrah. Although vinified as separate wines in 2013, the Coyote Bowl and Second Chapter vineyard fruit was blended for the new Signature Syrah, offering quintessential vibrant black fruit and pepper. Soaking in the valley views and sunshine we finished with dangerously addictive handmade caramels on our way through the tasting room. 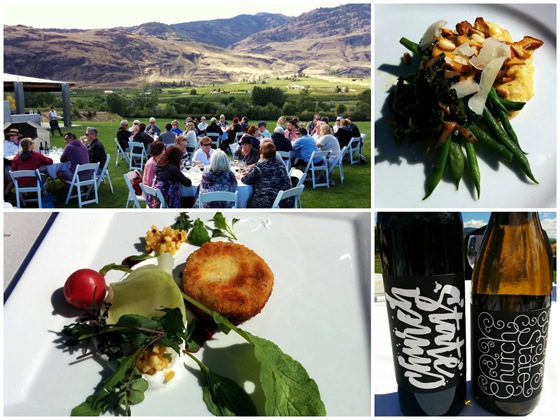 Mellow and merry the tour pulled up to nearby Stoneboat Vineyards for a gracious garden tasting at this highly respected winery. Unlike their Black Sage neighbours Stoneboat eschews Bordeaux or Rhone reds in favour of a Pinot particularity, from Gris to Noir and even the locally uncommon Pinotage. Known for superb Pinot Noir and Alsatian white varieties, Stoneboat branched out into sparkling wine in recent years, and we sampled the refreshing creamy strawberry watermelon of the (Pinot Noir) Rosé Brut to start. The newly re-labelled “Stone’d” white blend was formerly “Chorus” and a sample of 2014 showed perfumed, dry apricot from a smorgasbord of Pinot Blanc, Pinot Gris, Müller Thurgau, Viognier, Schönberger, and Kerner. Our tasting concluded with the winery’s only two varietal red wines, in this case from the 2013 vintage: dry currants, tea, and earth from Pinot Noir finished long while the darker-fruited, baking spiced Pinotage offered fuller tannin and sweeter strawberry to close out the visit. 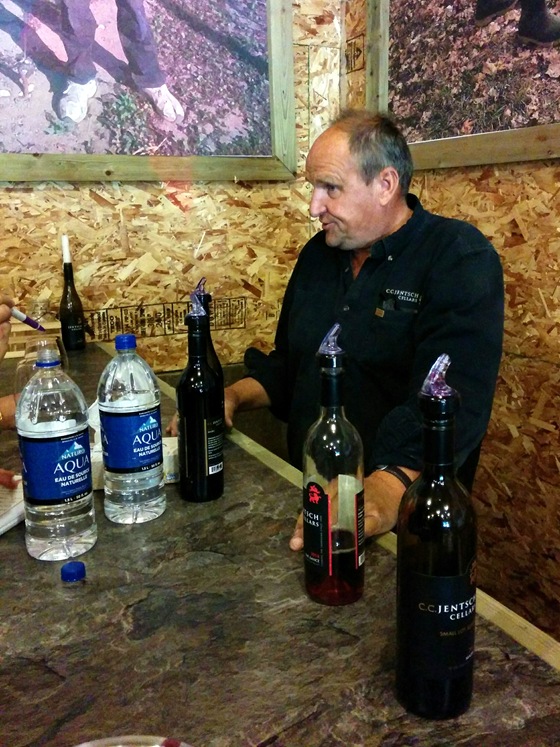 For the Bus Tour’s final visit veteran grower Chris Jentsch pulled out all the stops in a phenomenal display of generosity at his namesake C.C. Jentsch Cellars. Nearly ninety years of Jentsch family farming in the Okanagan contributed to Chris and his wife Betty launching wine sales in 2013 at their 63-acre Golden Mile estate vineyard. At a private tasting bar in the winery Chris and his team cracked open the full range of exclusive Small Lots series wines without restraint. Viognier from 2014 was dialed in with a varietal-focused yellow peach palate while 2015 Chardonnay found fans with butterscotch and toasty apple flavours. A trio of youthful 2014 reds provided plenty of perception thanks to floral, candied fruit from Malbec, earthy Cabernet Sauvignon, and the juicy mixed berry jam of Cabernet Franc. 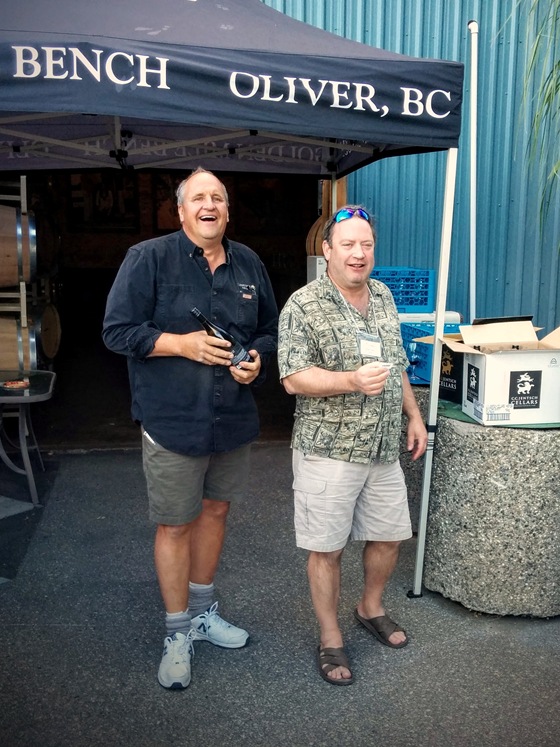 With seemingly unending energy, Chris next served up several pizzas for an afternoon aperitif as he announced a slew of surprising door prizes for many lucky winners, including one member who took home a full case of Rosé! The warmth and hospitality experienced at C.C. Jentsch easily eclipsed any afternoon ennui to ensure the weekend’s exciting adventures ended on an extra high note. Congratulations to the BC Wine Appreciation Society for yet another informative, entertaining, and successful bus tour!