The Similkameen Valley’s Clos du Soleil still feels like a young winery, despite concluding their tenth vintage last fall. This year’s harvest will mark the first full season in the newly constructed winery on the Keremeos estate. It is striking then to sample a nearly decade-long vertical from a winery that feels like it’s just getting started - and very strongly at that! Since 2012 Clos du Soleil has hosted an annual tasting sampling every vintage produced since the inaugural 2006 wines. I was honoured to be invited again this year, particularly since I had to cancel last fall on short notice, missing my first opportunity to attend. 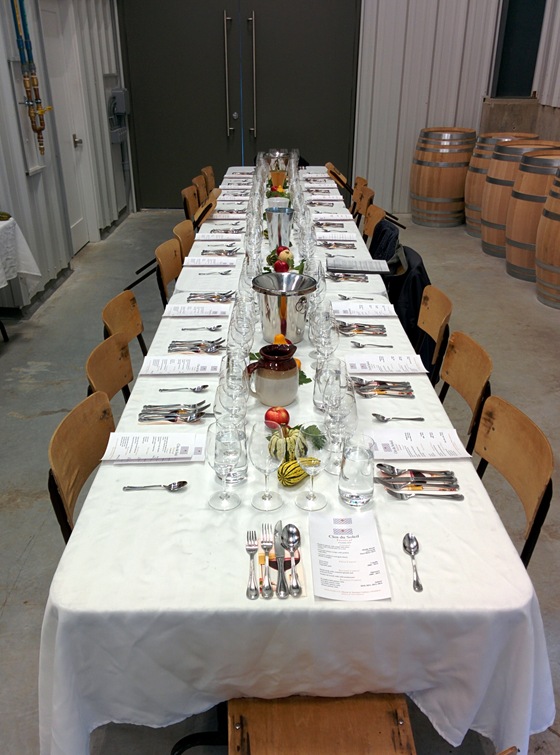 It just so happens that 2012 marked the year Michael Clark joined the partnership team, soon taking over winemaking duties from consultant Ann Sperling, who had produced the wines in her Kelowna winery since inception. Mike was on hand Thanksgiving weekend to welcome twenty lucky wine club and winery team members alongside local Master of Wine Rhys Pender, a friend of the winery who has guided all five of the tastings thus far. With the winery’s portfolio having grown over the years (and having just added Syrah), only the nucleus of Capella white, Signature red, and the Saturn dessert wine make up the vertical tastings, but we were set to taste every completed vintage! Alongside the coming samples talented Penticton caterers Shayna & Shulman Culinary Adventurers had prepared a three course menu to highlight the distinctly different wines. 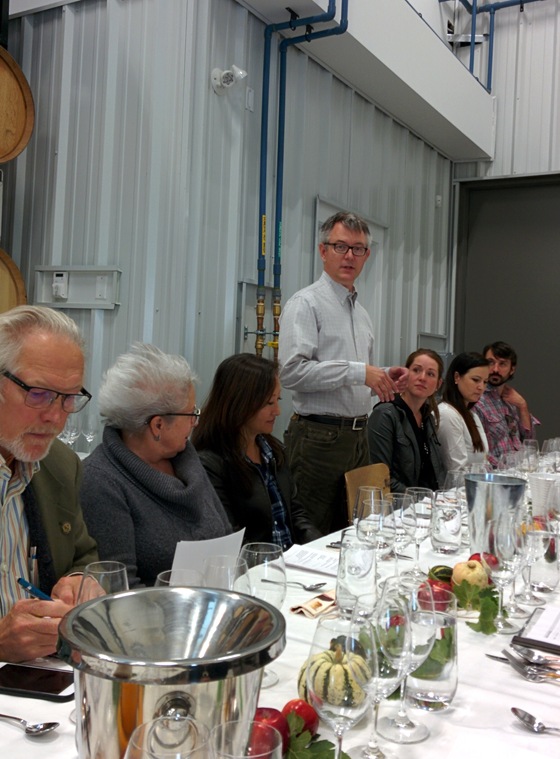 Amongst barrels and tanks inside the well-organized winery guests enjoyed the crisp and fresh 2015 Grower’s Series Pinot Blanc with canapés that included smoked salmon, prosciutto lettuce wraps, and cranberry goat cheese phyllo triangles. Seated, we reviewed the menu and long list of wines as Mike and Rhys introduced our first course of nine white vintages with vegetable paté plus tartars of tuna and beef. As a winery with a Bordeaux focus, Clos du Soleil’s Capella white provides a pleasantly age-worthy traditional blend of Sauvignon Blanc and Sémillon. Over the years Capella’s sophistication has grown as wild yeast barrel fermentation and extended lees contact has been introduced, as well as larger proportions of Sémillon reaching up to 12%. 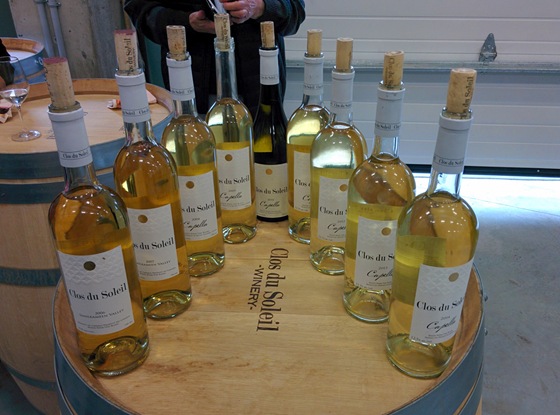 In 2006 Capella had not yet been named, and was known simply as Clos du Soleil White, although the first release was actually a straight varietal Sauvignon Blanc. Our first flight of three wines, from the reasonably warm vintages of 2006-2008 showed the stellar potential of time in bottle: my own personal favourite was in fact the 2006, rich in mature honeyed tropical flavours plus impressively lively acidity. Both 2007 and 2008 expressed drier notes of lemon and grass, while retaining that same bright sunny streak. Flights of three proved ideal at discerning each vintage’s individuality: significant heat in 2009 yielded further favoured tropical richness, leading into the youthful grassy gooseberry and complex palate of 2010, and the truly striking orange aromas and mouthwatering flavours of 2011. The relatively “normal vintage” of 2012 introduced our final flight of three, where grassy citrus returned amongst textural complexity and superb balance. My preference leaned towards the 2013, in which lemon curd took a visit to the tropics given time in glass. The newest 2014 was particularly fresh and clean of course, with savoury minerality amping up the complexity and potential. 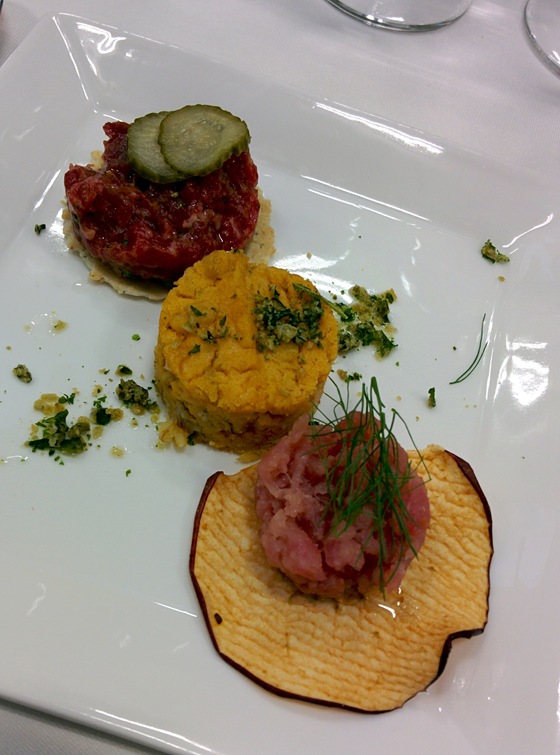 With even the early 2006 still vivacious and sophisticated Mike shared his own surprise: each annual vertical leaves him expecting a decline but Capella has passed a decade with ease. Less concern, (albeit unfounded as of yet) exists for Signature, the winery’s Bordeaux red blend, provided next with a duo of smokey peppered flank steak and sumptuous Daube de Boeuf with wild mushrooms. Just as the Capella was once simply “White”, Signature spent its early years in 2006 & 2007 without moniker, known merely as “Red”. (In recent years it has been joined by the rare and exclusive Estate Reserve, an outgrowth of Ann’s first “Winemaker’s Reserve” in 2010.) As the 2014 Signature develops in bottle we next received eight vintages from 2006-2013 to enjoy, in similar small flights of two or three. 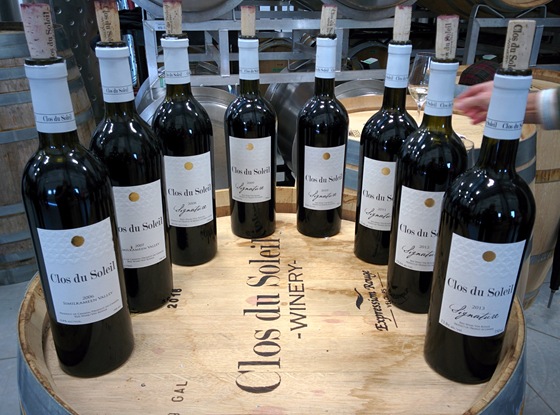 Initial Signature vintages favoured Cabernet Sauvignon, beginning with 60% against Merlot and Cabernet Franc in 2006, where solid fruit could still be found in the silky palate. Distinctly brick-coloured, it was fully mature and so well-rounded as to challenge specific flavour discernation. Similar colour and savoury beefy characteristics followed in the 2007, by which time Cabernet Sauvignon had declined to 45%. Malbec was introduced in 2008, where more delicate blackberry and vanilla aromas emerged before the rich but still fresh palate. Heat-loving reds soaked up 2009 - including Petit Verdot, introduced at 7% that year - providing for a particularly ripe Signature to lead our next flight, carrying dried dark fruits meshing wonderfully with the Daube de Boeuf. The elegant 2010 showed notably expressive, juicy fruit with many years ahead, mirrored in the floral 2011 as well. The final flight found 48% Cabernet Sauvignon leading Merlot’s 42% in 2012 as the wine became a fully Similkameen production (without inclusion of Okanagan fruit), mixing black with red fruits upon nicely ripe tannins and hints of leather and spice. More tannin - but equally ripe - could be found in the most recent 2013, where a Merlot majority presented attention-getting brown sugar and ripe purple fruit. 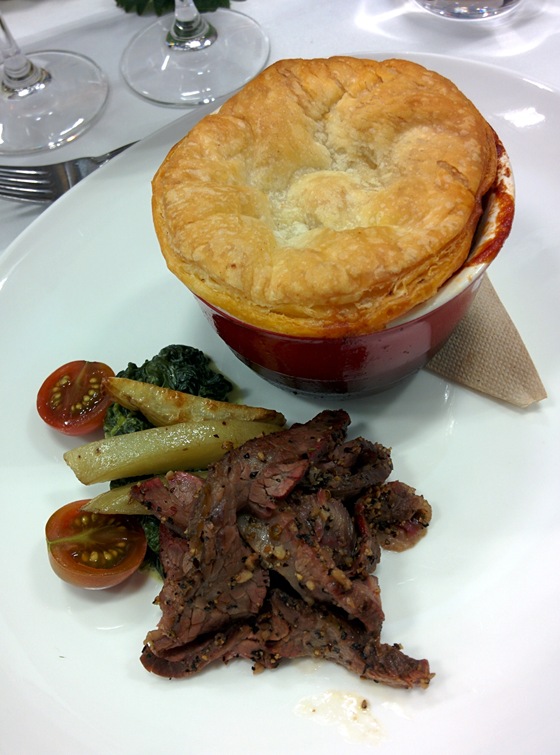 Looking back at my notes it was only after the fact did I realize I had favoured precisely the same vintages in both Capella and Signature: choosing a favourite in each flight had appointed 2006, 2009, and 2013 for white and red. Consistent appeal such as this suggests competent, non-interventionist winemaking and trustworthy reliability in bottle as well. The 2014 Signature will emerge sometime next year, with little rush given the winery’s efforts to increase bottle-aging before release. Interestingly, it was revealed that Petit Verdot has reached record proportions - into the unusual double-digits - for 2014, which should provide yet another unique and expressive perspective in Signature’s lineage.

The modest and focused portfolio of wine produced at Clos du Soleil gains a little additional variety thanks to an homage to Sauternes found in the late harvest “Saturn” Sauvignon Blanc. The vertical tasting concluded with a single flight of the four vintages in existence: 2010, 2011, 2013, and the brand new 2014. Harvested late in the season and fermented slowly over months in neutral oak puncheons, Saturn is eminently ageable, developing the same complex honeyed fruit as Capella over time, but richer by an order of magnitude. Although a glass of Saturn is itself dessert, Shayna & Shulman had assembled four precise and sublime petit panna cotta for a final food pairing, with flavours of Lemon Lavender, Honey, Earl Grey, and Pumpkin Latté. 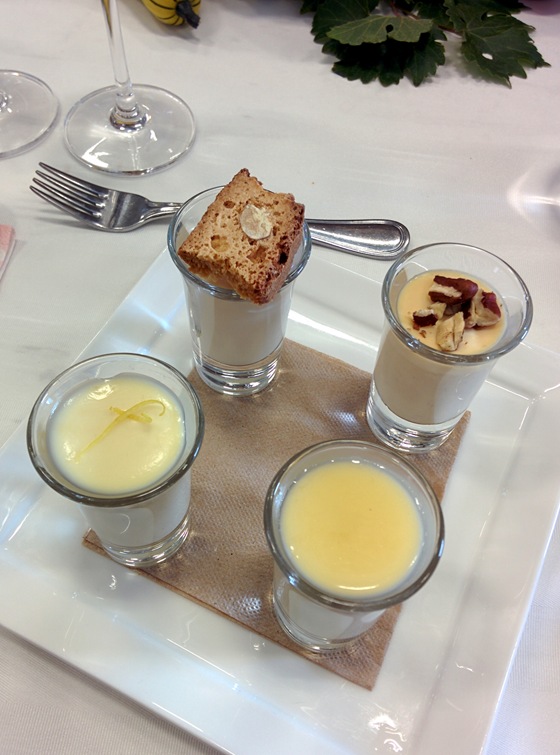 In the glass the four Saturn samples shared a common age-induced colour transition as Capella had earlier displayed, with the eldest 2010 warmly golden against the youthful blonde of 2014. The wines had aged with ease, such that 2010 offered tropical passion-fruit and nutty, honey-soaked apricot nectar. Even so, I further preferred the 2011, in which beneficial Botrytis had set in by harvest, rendering the most intense, expressive nose of all four and lip-smacking marmalade on the finish. Clean and ripe, 2013 was showing more stone fruit plus some balancing pithy bitterness, while the presently tangy 2014 retained yeasty aromas amongst fresh apricots before a teasingly long, delicate finish.

Like any good wine tasting, we ran over schedule and were left longing for more, lingering over panna cotta and the last precious drops of Saturn. A round of thanks to the chefs, staff, and hosts ensued before guests dispersed to further explore the winery and vineyards. I myself couldn’t miss a gander at three huge new cubical concrete fermenters awaiting red varieties, while white bubbled away in tanks and puncheons alongside. Mike’s excitement about the upcoming reds was palpable as he showed off the tanks and discussed strategy for the remainder of harvest and crush. Another year for the record books should maintain the annual Vertical Tasting as a regional highlight in high demand!

I like the sound of this, thank you. I am only 1.5 hours from Keremeos, so it looks like a visit will be in order.