The end of September initiates the Fall Okanagan Wine Festival, bringing out many new red wines to get us through the winter months. October is often a bountiful time for local wine collectors as a result, with many wineries timing their releases to coincide with the Festival (or they simply need room for the upcoming vintage!) The reds release prompts club shipments as well, and I found myself awash in deliveries of bottles to swell my cellar this month, joined by a few choice retail purchases for good measure. The new acquisitions also helped me grow vertical collections from a range of wineries small and large. 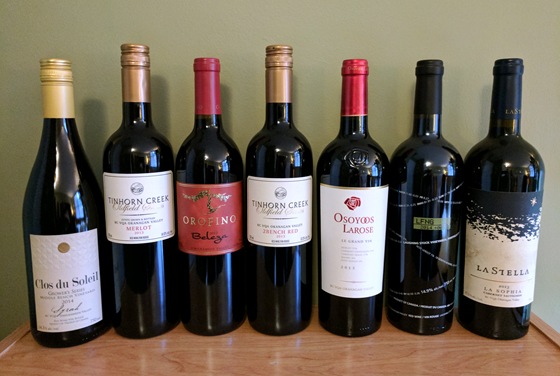 Clos du Soleil 2014 Middle Bench Syrah: This small Keremeos winery maintains an estate focus on traditional Bordeaux varieties and blends, but still works with longtime partner vineyards for their “Grower’s Series”. A history of superb Pinot Blanc and Cabernet/Merlot in this series was unexpectedly - and pleasantly - upended this year by the winery’s first varietal Syrah. Sourced from the same Keremeos vineyard as the Pinot Blanc, the Syrah was extremely impressive when tasted at the winery in September, even before I received a pair of bottles in my most recent Wine Club shipment. The attractive nose of cherry, chocolate, and vanilla (a ringer for Black Forest Cake) segued nicely into the delightfully fresh purple-fruited palate before a textbook black pepper finish. Ten barrels of French oak aged for 16 months before the small lot of 250 cases was bottled under screwcap this spring. Winery Direct $27

Tinhorn Creek 2013 Oldfield Series Merlot: As National Wine Awards judge DJ Kearney put it last summer, “This is an Okanagan stand-out, year after year after year.” That 2012 vintage received a Silver medal at the Nationals (plus Best Merlot at this spring’s Best of Varietal Awards), and the brand new 2013 should continue the long-established high-quality trend. This reserve-tier Merlot is the original from Tinhorn, going back to 2001, and now accompanied by several other Oldfield Series varietals and blends, including a delicious new Chardonnay. The wine has been fine-tuned alongside the 17-year-old source vines on the Black Sage Bench, going through 18 months of French oak aging (30% new) before a year in bottle prior to the autumnal release. It’s one of several new reds I was happy to find in my latest Crush Club order, with wider public release in the near future. Winery Direct $31

Orofino 2013 Beleza: John & Virginia Weber’s Similkameen Valley blend “Beleza” has always provided superb quality at an excellent price point for a flagship red. Merlot and Cabernet Sauvignon comprise the majority components: the Cawston estate vineyard provides Merlot, Cabernet Franc, and Petit Verdot, while the (literally) neighbouring Hendsbee vineyard contributes Cabernet Sauvignon, plus more Merlot and Petit Verdot. I was fortunate enough to get a taste of the newest release even before two bottles showed up in my latest Collector’s Club shipment. The vertical tasting enjoyed in September by the BC Wine Appreciation Society went back to 2006 (still lively) and provided a delicious early glimpse at the young 2013, deliciously fruit forward at present with generous structure and ripe character to carry it for years to come. Winery Direct $34

Tinhorn Creek 2013 Oldfield Series 2Bench Red: Now in its seventh year, Tinhorn’s ode to their Golden Mile and Black Sage Bench vineyards has become a heavy-hitter at the winery, with nearly 1,700 cases produced from 2013. Somewhat unusual for a BC red blend, the Cabernets comprise over 70% (47% Sauvignon & 24% Franc), with versatile and popular Merlot taking a backseat beside 6% Malbec and 3% Petit Verdot. This considered blend was then aged on the lees in 30% new French oak for 18 months before another year in bottle. I’m happy to continue the vertical collection I have nurtured since inception in 2007: with several good years ahead of it, I should have plenty of time to allow for the “room to improve” hypothesized by Rick Van Sickle (despite this “gorgeous” 91-point wine drinking so well at present). Winery Direct $35

Osoyoos Larose 2013 Le Grand Vin: Arguably Vancouver’s most conservative wine critic, Anthony Gismondi found the newest Grand Vin to be the best ever in his estimation, heaping tribute upon the 2013 on a particularly generous day this month. It would appear that Osoyoos Larose had been flourishing since Bordeaux’s Groupe Taillan took sole control from conglomerate Constellation Brands just as this vintage was being harvested, with the new French winemaking team: “making some impressive tweaks to its Canadian treasure.” The near perfect conditions in 2013 contributed to (several thousand cases of) a fully ripe, locally perfected blend of 57% Merlot, 17% Cabernet Franc, 16% Cabernet Sauvignon, 6% Petit Verdot, and 4% Malbec. It’s high time for me to open the 2007 and make room for this “effortlessly ageable” bottle in my vertical collection. BC Liquor Stores $53

Laughing Stock 2014 Portfolio: Another beneficiary of Gismondi’s unusually plenteous praise this month was this well known Naramata Bench superstar. The 93-point score suggests October 10 was a very enjoyable day in the office for the Gismondi on Wine team! It would appear that “it’s all come together in 2014 for Portfolio,” thanks to a continuing trend of quality vintages in BC, along with the established skills of David & Cynthia Enns. Like Le Grand Vin, Portfolio is a Canadian benchmark red blend, with the 2014 serving as further proof of excellence. Winemaker David carefully blended 49% Merlot, 28% Cabernet Sauvignon, 20% Cabernet Franc, 2% Malbec, and 1% Petit Verdot from 100 barrels aged for 19 months, yielding 2,450 cases that will sell quickly nation-wide. As a member of the Preferred Share Club I was ensured a couple bottles in my final shipment of the year. Winery Direct $52

LaStella 2013 La Sophia Cabernet Sauvignon: LaStella’s small lot varietal Cabernet Sauvignon comes from Sam Baptiste’s old vines “U2” block outside Oliver, considered by many to be the best Cabernet source in the province. Having top tier access to this exceptional fruit allows Winemaker Severine Pinte to craft a sublimely pure, rich, and powerful Cab that should be near the top of any collector’s list. Having a taste earlier this year exposed me to long, pure cassis and cocoa, and a surprisingly silky texture already. John Schreiner’s 94-point review in April covers the bases nicely, and includes important mention of the mere 125 cases produced. Given the winery’s devoted fans it will be highly sought after, even at the elevated, but ultimately reasonable price. As much as I want to crack it open already I know even better years lie ahead, and the 15.1% alcohol should help preserve that intense character for some time! Winery Direct $80