Giving Thanks for BC Wine

The generous invitation I recently received to Clos du Soleil’s annual vertical tasting prompted plans for a wine country getaway. Having already visited Orofino’s marvellous guest suites this summer my wife and I immediately snapped up the spacious two-bedroom unit and encouraged some close friends to join us for a Similkameen sojourn over Thanksgiving weekend. Saturday morning saw me stopping at Clos du Soleil’s Keremeos winery for an exquisite lunch and guided tasting of every vintage since the inaugural 2006. My companions continued down the road and joined Orofino’s Collectors Club pickup party for a vertical tasting of their own. 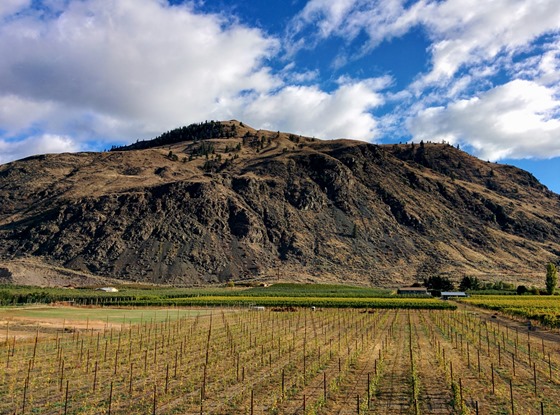 Following the incredible assortment of wine and food at Clos du Soleil I made my way to neighbouring Cawston where the party at Orofino was gradually winding down. I was sure to bring with me my latest Soleil 160 Club order, it having patiently awaited my arrival in person since August. The box of reds included the delicious new 2014 Grower’s Series Syrah, a first for the varietal from Clos du Soleil, plus another bottle of exquisite 2012 Estate Reserve, and some of the finely crafted 2013 Signature to boot. I had added another bottle of the dreamy “Saturn” late harvest white for good measure, particularly given the admirable aging potential it had shown in the vertical tasting.

I found everyone in superb spirits at Orofino; no surprise, given the three vertical flights John & Virginia Weber had generously shared with the multitude of Club members on hand. The party had taken place in the unoccupied one-bedroom suite, where guests gazed upon the newest vineyard plantings from the expansive balcony. I was soon brought up to speed and provided with some detailed notes from earlier, during which several Riesling had launched the tasting: even the mature and expressive 2006 was in fine form. Textbook petrol and lemon-lime gave way to honeyed tropical fruits in the younger vintages, with seemingly effortless balance whether one gram of sugar (2015 Hendsbee Vineyard) or ten (2015 Home Vineyard).

For a look at Orofino’s red wines the Webers had dug even further back to find several vintages (2005, 2007, 2009, 2011, 2013) of Home Vineyard Pinot Noir and even the flagship Beleza blend. The estate Pinot Noir comes from multiple clones planted as early as 1989, and has always been crafted in a signature Similkameen style, with dark fruit and spice expressing the warm valley floor. Early years were all drinking well, having matured to encompass earthy caramel and juicy dark cherries ready to be enjoyed, while the cool 2011 could continue refining in the cellar for several more years. The Beleza vertical highlighted the superb cola, chocolate, and red berry salad of 2007, John’s self-declared best wine ever. My own several-vintage vertical collection should age fine without much haste given the youthful state of 2009 and onward: the rich smoky fruit in each was still expressing generous tannin. 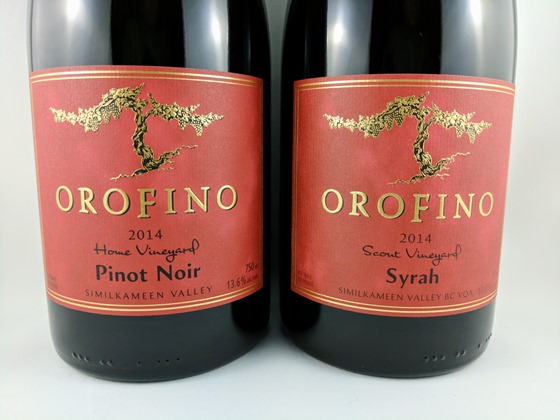 Just steps away our own suite allowed for a relaxing and mellow evening with help from a few more bottles on hand, including my latest Club package of 2015 Moscato Frizzante and 2014 Scout Vineyard Riesling (plus the newest 2013 Beleza). Orofino’s latest 2014 Pinot Noir and Syrah were also available in the tasting room, and I made certain to bring some home as well. With typical production for each hovering between 300-400 bottles I never miss either of these highly reliable varietals. The evening passed with nibbling and sipping and plenty of laughs while we absorbed the soothing Similkameen evening and generously appointed suite.

The following day we embarked on a whirlwind tour of the Okanagan from our home base in Cawston, stopping first at the shimmering Painted Rock tasting room high above Skaha Lake. Our friends had last seen the property when a pre-fabricated shed was all that stood where today John Skinner proudly hosts exceptional dinners, weddings, and helicopter landings all summer long! John’s dedication and precision were on display in his newest small lot varietal: in 2014 a mere handful of barrels were reserved from the flagship Red Icon blend to provide for 110 cases of Malbec. The dark violet colour – enchanting against the immaculate white bar – led into the similarly soft purple palate, where raspberries and Concord grapes were found amongst layers of spice and long, fine tannins. Our superb timing ensured a spot for this extreme rarity in my collection.

The notably fine 2014 vintage provided Painted Rock with spectacular Cabernets as well, and with healthy Franc plantings in the estate vineyard over 400 cases were excluded from blending (although Red Icon 2014 still has 21% Cabernet Franc). Rarely seen outside the tasting room, the new batch is only the second varietal Franc released. We noted an appealing earthy herbaceousness on the nose atop bountiful ripe fruit, and a slightly smoky, intense palate with more tannin than the Malbec – this one should make long waves in the cellar. In production since the start in 2007 the varietal Cabernet Sauvignon sells out particularly fast, but we got a taste while present, much to our liking: leather and spice with juicy balsamic character on the nose meshed with a red fruit palate of currants, stewed strawberry, and long-lasting vanilla. The toasty aftertaste conjured notes of Bourbon barrel caramelization to draw out the long-lasting finish. 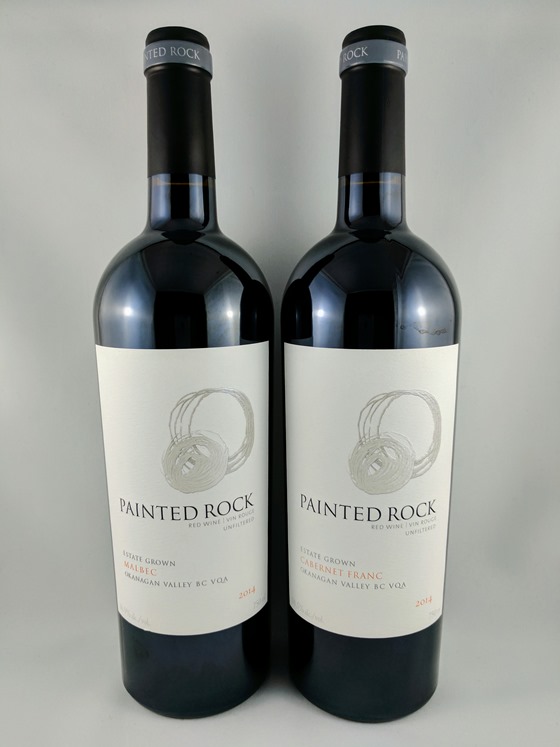 Stocked up on reds and the irresistible Painted Rock Chardonnay we stopped next at Meyer Family Vineyards to the south in Okanagan Falls. Speaking of Chardonnay, the Meyer family’s specialty was a large part of my collected Club order: a stop in the tasting room accompanied my pickup of 2014 McLean Creek Road Chardonnay and 2015 Old Main Road (Stevens Block) Chardonnay. The McLean Creek home vineyard scooped a well-deserved Gold medal from this year’s National Wine Awards amid stiff competition (five of sixteen total Platinum medals were found in the Chardonnay category). Also in my triannual box of four bottles were a pair of mouth-watering 2014 McLean Creek Road Pinot Noir – one for now and one for the cellar I should think!

With lunch on our minds and a destiny to the south we made it to the Golden Mile and a valley view at Tinhorn Creek’s renowned Miradoro Restaurant. There, moan-worthy deluxe grilled cheese sandwiches briefly took our attention away from wine and the sunny skies, before a visit to the still-bustling tasting room. The newly released 2015 Gewürztraminer was proudly displaying its new Golden Mile Bench sub-appellation labelling, and offering unbeatable value for just $16 to provide reams of culinary pairing opportunities; I made sure to stock up.

Similar cellar-stocking was available at near neighbour Fairview Cellars, home to Bill Eggert’s esteemed big reds, and increasingly some fine Chardonnay and Pinot Noir under the radar. We caught up with Bill and his affable brother Chuck in the little log cabin tasting room, and were easily distracted by a menagerie of dogs and one feisty feline vying for attention. The newest 2014 Bucket O’ Blood Syrah-Cabernet made an equally strong impression; even so, with a December 2019 Best After date in print I hope to maintain the patience I have for the rest of Bill’s wines. Little surprise that other bottles like the 2014 Cabernet Franc, 2013 Cabernet Sauvignon(s), and the inevitable tasting room back vintages provided plenty more palate pleasures in the refreshingly informal atmosphere Bill cultivates alongside his champion grapes. 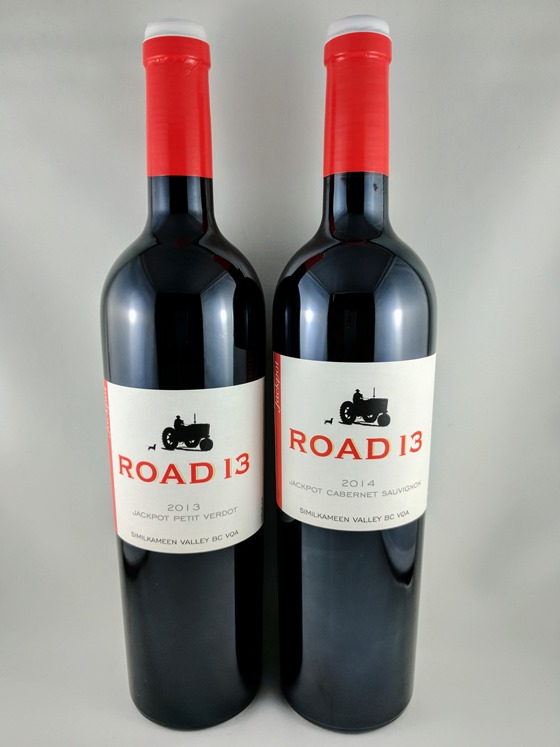 Five wineries in one day seemed quite restrained as I brought us last to Road 13 before hitting the highway back west. There the Executive Lounge was still open under the supervision of proprietor Mick Luckhurst, hosting grateful Club 13 members for one of the region’s best guided tastings. There everything from Sparkling Chenin Blanc to the newest 2012 Fifth Element and awesomely rich 2013 Jackpot Petit Verdot were on hand, with Mick’s signature commentary and industry musings. It was the micro lot of simply stunning 2014 Jackpot Cabernet Sauvignon that blew our socks off in particular: just 70 cases are being dribbled out at iconic prices, but I was more than willing to fork over $120 for a single bottle to cellar with glee. Fitting that the Cabernet (and Petit Verdot) comes from Cawston’s increasingly legendary Blind Creek Vineyard: we soon returned to that neck of the woods for one more night of tranquil rest to round out a wondrous weekend.