After many years of monthly dinners it should no longer surprise me when our wine club serves up a common theme without any coordination. Bring together a group of people with similar preferences (hence our friendship), living and shopping in geographical proximity, and the end result is continuing culinary amusement. Having experienced the same Vancouver autumn, we were apparently left wanting for similarly styled foods this month. Our most recent communal dinner offered filling starches accompanied by several wines that including a quartet of creamy Chardonnay to complete our theme. 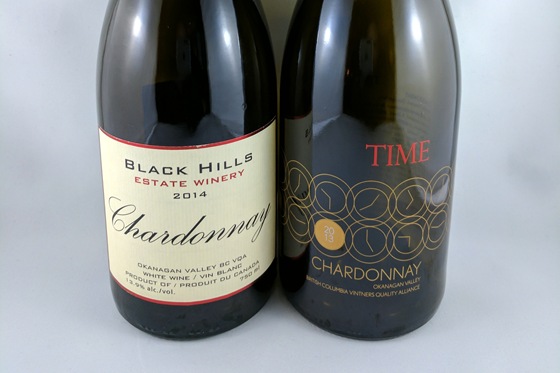 The hearty hors d’oeuvres course set the tone to start with a relatively simple but scrumptious pair of bread loaf fondue. Hollowed out and filled with Brie and Smoked Cambozola the loaves of sourdough were baked until bubbling and served with breadsticks and potato wedges for dipping. To help temper the upcoming cheese comas two bottles of Black Sage Bench Chardonnay freshened our palates between bites. Black Hills’ 2014 provided bright citrus aromas and an intense, tart introduction leading into a long finish of caramel popcorn and Crème Brûlée. From Harry McWatters’ Sundial Vineyard just up the road the 2013 TIME Chardonnay was equally enjoyed, providing apple and melon flavours on the buttery, well integrated palate. The round, smooth texture emphasized a light caramel finish syncing with the delicate but luxurious Brie. 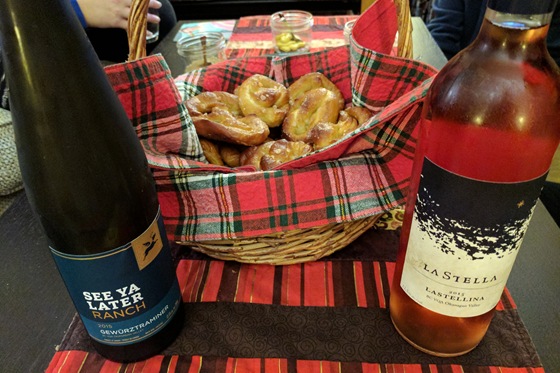 With a chuckle, the appetizer team next unveiled their contribution of soft pretzels and a quintet of artisanal mustards. Alongside the chewy, salty morsels was See Ya Later’s 2015 Gewürztraminer and LaStella’s “LaStellina” 2015 Rosé. Quintessential exotic aromas like Jasmine flower (helped along by a splash of Ehrenfelser in the blend) marked the Gewürztraminer. The off-dry, deeper-flavoured palate was a very pleasant complement to some of the particularly spicy mustards, and helped cool the enjoyable burn. The blended saignée-style Rosé (Cabernet Franc, Merlot, and 8% Sangiovese) presented aromatic strawberry-rhubarb and angel food cake, carried through on to the blushing red berry palate. I tasted a savoury mouth-watering hint I called Dill Pickle Chips as well, but what do I know! 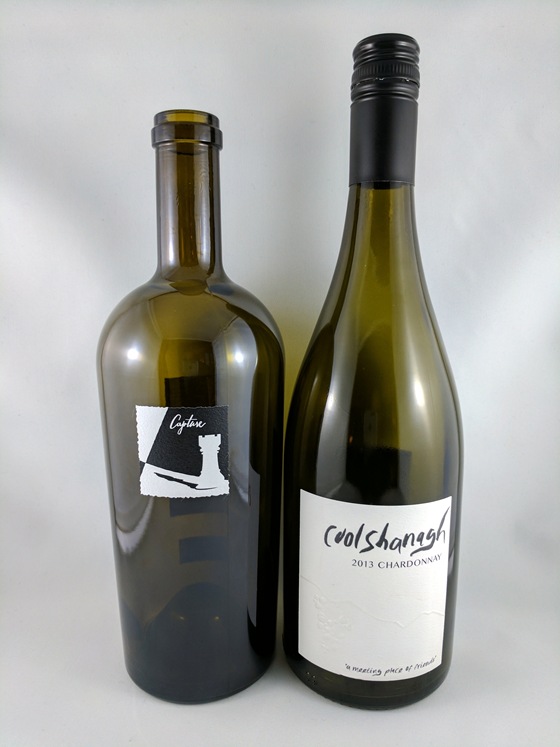 Two bottles of Chardonnay already weren’t nearly enough as we revealed another duo yet to come with the entree course my wife and I had prepared. With a nod to the vegans and vegetarians at the table we delighted in serving Vegan Scallops in White Wine Cream Sauce, over loveable bow-tie pasta. (A few actual sea scallops were also provided for the other half of the crowd.) Chardonnay had been planned for days, and nothing was going to stop us from opening the special bottles we had in mind. The 2013 vintage was presented from the Golden Mile’s Checkmate Artisan Winery (a Von Mandl franchise), as well as the much more diminutive Naramata Bench estate of Coolshanagh.

As we assembled and garnished the plates our guests were invited to sample Checkmate’s 2013 “Capture”, one of five primarily vineyard-specific Chardonnay from this focused project launched just last year. A recent visit to the winery and generous private discussion with Winemaker Phil Mcgahan encouraged a splurge purchase of a single bottle we were excited to share. The descriptors came fast and furious after opening, and everyone marvelled over this exceptionally complex wine. The ever-changing aromas ranged from brine, to marzipan, truffle oil, and orange blossom. A well-rounded palate of butterscotch and poached pear was supplemented by caramelized lemon and a tart dried apple, raisiny finish to further acclaim. 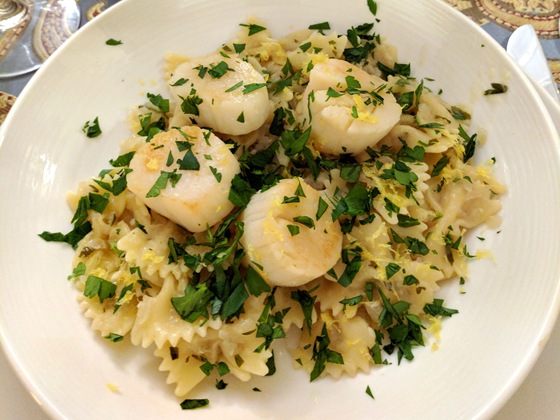 While Mcgahan sourced a 1997 planting of Osoyoos East Bench fruit bordering the US for his seven barrels of Capture, Coolshanagh’s Skip & Judy Stothert planted their northern Naramata property in 2004. Several years selling to Foxtrot culminated in their launch of the 2012 vintage with help from Okanagan Crush Pad and Winemaker Matt Dumayne. The 2013 spent 11 months aging on its lees in neutral oak and concrete, lending it similar butterscotch character as the Capture (itself aged 18 months), but took on an even creamier texture. Tension provided by integrated minerality and balanced acidity made for a lingering finish as the last of the coconut-creamed bowties were consumed.

After bread & cheese, pretzels, and pasta, came the eye-brow-raising dessert course of cake! Double Chocolate Fudge Brownie Cake was not only the icing on top of the meal, it featured icing on top – cool refreshing mint too. A pair of Syrah brought us some much-needed red attention, with versions from Osoyoos and Keremeos to offer dark fruit and spice for chocolate pairing. Moon Curser’s 2013 was particularly complementary: the meaty, leathery nose led into smooth, juicy fruit and eucalyptus notes. The gorgeous violet colour of Clos du Soleil’s first Syrah, from the 2014 vintage, provided even deeper and darker character from a cooler and more reserved expression that embraced the mint icing and garnish. 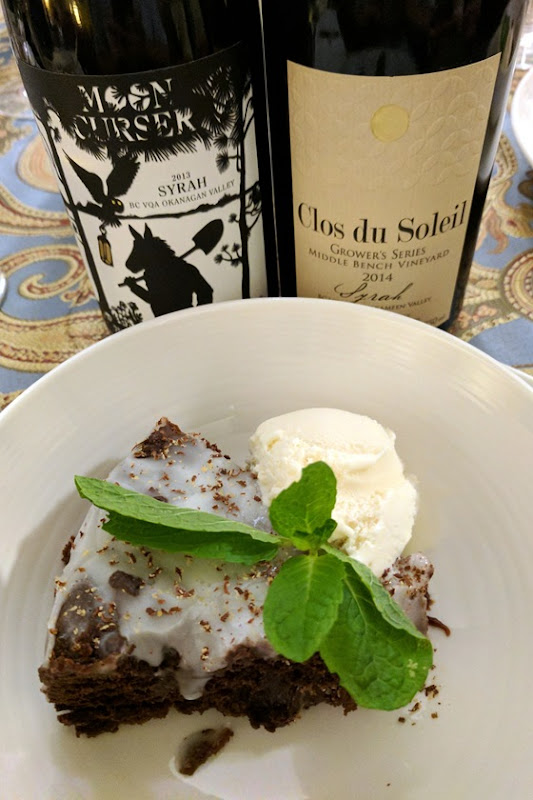 Wine club dinners typically feature four courses, but whenever some beloved former members return to visit we enthusiastically expand. This month some flash-frozen friends arrived from Tucson, Arizona eager to reconnect, and – to warm themselves more than anything – they mulled up a batch of Road 13 Honest John’s Red. To cloves, cinnamon, and orange segments they added a generous helping of Port for that extra something-something. This well-spiced after-dinner tipple came with candy canes, cookies, and chocolate to kick-start the holiday season. A few more opportunities like this in the weeks to come would be most welcome!