A timely visit to Osoyoos mid-month provided plenty of results in the tail-end of wine-touring season. While the majority of wineries close their tasting rooms after Halloween, appointments are often available. Day trips as far north as Lake Country during my week-long stay offered one last chance this year to nab a few newly released rich reds, now well on hand as the holiday season approaches. While some of these small lot bottles may be spotted in finely-curated wine stores most remain exclusive to the wineries – but fortunately holiday shipping specials are approaching! 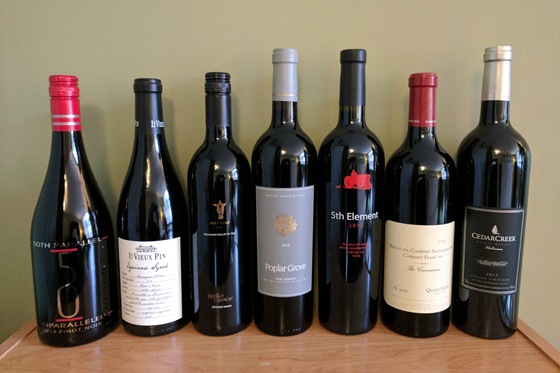 50th Parallel 2014 Unparalleled Pinot Noir: Only on my fourth visit to the Okanagan since tasting it in July was this young winery’s first reserve-tier Pinot Noir finally available for sale. The superb quality of the 2014 vintage allowed experienced Winemaker Grant Stanley to choose the best fourteen barrels from among 150 and blend four Dijon Clones (114, 115, 667, 828) in a deeper and darker expression of Lake Country terroir. Additional time in barrel and bottle beyond that experienced by the (excellent) regular Pinot has yielded a profile of cedar forest and earthy cherry pie, with plush tannins for structured cellaring. Even before release, a Silver medal at the Decanter Awards was followed by Gold at Canada’s National Wine Awards, where Judge DJ Kearney complimented the “wonderfully pure fruit” shown off via “the confident stamp of a winemaker who knows Pinot Noir intimately.” Winery Direct $57

Le Vieux Pin 2013 Equinoxe Syrah: After many months in bottle awaiting its day in the sun the newest Equinoxe Syrah is finally available for purchase, albeit only 267 precious cases worth. The Equinoxe is the pinnacle of Le Vieux Pin’s boutique Syrah triplet, blended from the absolute best of four southern Okanagan vineyards this vintage. With full confidence in the fruit’s purity and intensity, Winemaker Severine Pinte elected on entirely used oak, the vast majority fully neutral, for the 18 month slumber. Tasting it in August is what allowed Anthony Gismondi to “confirm the 2013 vintage in my mind as one of the best ever in the deep south Okanagan.” Gismondi’s (rarely allotted) 93-point score was matched in Decanter Magazine alongside Tony Aspler’s affirmation it represents “one of the best Syrahs from a Canadian vineyard I’ve tasted.” Winery Direct (& VQA Stores) $92

Blasted Church 2014 Holy Moly Petit Verdot: The seventh vintage of Blasted Church’s locally uncommon varietal Petit Verdot follows a Lieutenant Governor’s Award for the well regarded 2012. The winery feels the 2014 is the “richest and fullest-bodied to date,” thanks to a respectable 25 Brix at harvest (from Osoyoos) in the first week of November. Following full-berry fermentation on the skins, it was transferred to an eclectic blend of new and used American, Hungarian, and French oak for twenty long months. The wine picked up a Gold medal at the Okanagan Fall Wine Festival’s BC Wine Awards, but be forewarned: like other “Revered Series” wines the Holy Moly recently became a wine shop (and Club) exclusive. My own visit to the winery came with minutes to spare before the gates were locked on an unsettlingly early darkened evening; I remain grateful for my opportunity to acquire this rarity given only 150 cases were produced. Winery Direct $46

Poplar Grove 2012 The Legacy: Collecting my latest Club order at the winery ensured I could continue my vertical of Poplar Grove’s icon red, packaged alongside rare varietal Cabernet Sauvignon and a new white blend, “Collectif”. The Legacy is known for dependable quality and equally consistent sales, so the 900 cases produced will sell quickly - hence only a single bottle was included in Club shipments! The blend’s vintage variety provides something new each year, and in 2012 Cabernet Franc led the charge, comprising 35%, and then a pleasing 23% Malbec, 22% Merlot, and only 20% Cabernet Sauvignon, with grapes sourced from both Osoyoos and Naramata Bench vineyards. Twenty-one months in French oak and a further two years in bottle before release ensures immediate approachability, but even so the winery feels it should remain relevant for another decade. Winery Direct (& VQA Stores) $50

Road 13 2012 Fifth Element: The second vertical collection I finally furthered came thanks to Road 13, where I also picked up the year’s final Club shipment, including another bottle aged 2012. Unlike many local blends this one skews from the Meritage formula by adding a slice of Syrah: 2012 includes 46% Merlot, 18% Syrah, 17% Cabernet Sauvignon, 9% Cabernet Franc, and 6% Malbec. A taste at the winery manifested the full-bodied, well rounded palate, with flavours of ripe mixed berries and baked brown sugar leaving me well satisfied. Some may feel it’s “a bit of a brut just now,” like WineAlign judge Steve Thurlow upon awarding a Silver medal at the Nationals, but my bottle has plenty of time to settle down in the cellar - I haven’t even opened 2007 yet! Winery Direct (& VQA Stores) $49

Quails’ Gate 2014 The Connemara: Although a Burgundian heart of Pinot Noir still reigns supreme at Quails’ Gate, the West Kelowna winery’s inaugural Bordeaux blend is making notable waves under the guidance of recently installed Winemaker Nikki Calloway. The winery reports their ten best barrels were selected to yield just 200 cases of 55% Merlot, 30% Cabernet Sauvignon, and 15% Cabernet Franc, aged for 18 months in French oak after indigenous fermentation. It was only just bottled (unfiltered) this summer and released initially to the Wine Club. From the sounds of Anthony Gismondi’s exuberant 92-point review it will make for an ideal cellar-worthy collectible: “Nothing but a bright future here...this will get even better.” WineAlign’s David Lawrason suggests aging this “stylish, elegant, and compact” achievement until at least 2020, which is precisely what I plan on doing. Winery Direct $64

CedarCreek 2013 The Last Word: In the spring after the grapes for this long envisioned blend were harvested CedarCreek was purchased by Mission Hill founder Anthony Von Mandl. The highly capable existing Winemaker, Darryl Brooker, was retained and saw it through 20 months of French oak aging before he completed the blend and moved to Mission Hill immediately after bottling in August 2015. Apparently previous attempts at a wine of this nature had not measured up to the penultimate title, but in 2013 conditions were ideal for the blend of of 34% Cabernet Sauvignon, 32% Merlot, 24% Cabernet Franc, and 10% Malbec. Just months after release (of 314 cases) The Last Word scooped one of eight prestigious Platinum medals at this fall’s BC Wine Awards, and has amassed significant celebration from experienced reviewers at the same time. WineAlign’s Michael Godel, with particularly poetic praise, suggests drinkers should “plan on getting extra hours of REM sleep after a glass.” Winery Direct $90