Last month a new private liquor store called Legacy opened in the Olympic Village (aka Millennium Water) neighbourhood; and not just any store, but the “largest private liquor store in BC!” At 8,600 square feet I can testify that this is a big store for someone used to the tight spaces of VQA wine stores and shops like Liberty Wines. I was fortunate enough to attend the grand opening and check out the BC wine selection, which impressed me a great deal in the expansive offerings and the aggressive prices. Although the majority of their selection was marked only by hand-written Post-It notes on that first day I could tell that Wine Supervisor Lesley Anne Saito has sourced some unique and hard-to-find offerings, and has permission to price them very fairly.

I have since revisited Legacy and although there were still a few empty spots on the shelves the majority of their wine has been displayed – with plenty of room to grow. In fact with such large common spaces in the centre of the store Legacy is able to build massive flexible displays like the tower of Joie wines I admired during my second visit. Upon entering I immediately spotted some rare gems in the BC wine section and was forced to make the difficult decision of which two bottles to purchase – my typical wine-shopping bag only has room for two, to keep my buying habits in check! Although Lake Breeze’s 2007 Tempest caught my eye – having just been awarded a high silver medal at the Canadian Wine Awards – I ultimately settled on two even rarer big reds for my 2007 collection. The first choice was relatively easy, as Legacy is the first store in which I have ever spotted Rollingdale’s La Gauche Cabernet Sauvignon-based blend. With only 385 cases produced, and a sterling 91+ points review from Icon Wines I knew this little-known wine would be a valuable addition. Rollingdale also produces a Merlot-heavy blend called La Droite (the names refer to the Left and Right banks of Bordeaux), but I don’t think I’ll be so lucky as to own the full pair; perhaps as Rollingdale’s reputation grows so too will their production and distribution. 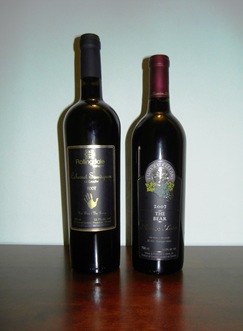 The second bottle I selected was Bill Eggert’s “The Bear”, a complex Meritage blend from his Fairview Cellars winery. I was lucky enough to find the 2006 vintage earlier this year, and now thanks to Legacy I can add the 2007 to my collection. Once again I put my trust in the talented team at Icon Wines: their 91-93 point review for this vintage was hard to ignore. The Bear is said to be included in the wine lists of many top BC restaurants, and I look forward to aging mine a few years in an attempt to do justice to Bill’s hard work. Fairview Cellars recently updated their website to include more than just contact information – it now lists the current releases and purchasing information. In fact the 2008 vintage of The Bear is already available via the winery, and Bill is keeping the price at a very reasonable $35. A high-quality boutique winery Meritage for under $40 is a treasure in BC’s cut-throat industry, given the many challenges and expenses faced by small producers. I hope to keep adding wines from Fairview Cellars to my collection over the years; I would suggest keeping your eyes peeled for entry level blends like “Madcap Red” and “Two Hoots”, I certainly will be!