Last month I received my first shipment of wine from CedarCreek’s newly launched “Platinum Club”. With so many BC wineries devising wine clubs it was great to find out CedarCreek had done the same – with some great perks to boot. In general I find most winery clubs are of greatest benefit to those residing in smaller communities: the large number of public and private stores in Metro Vancouver tend to negate their greatest benefit – hard-to-find rarities. It can be challenging to justify paying for shipping multiple times per year for wines you can get just as easily in the VQA Store down the street, for example. CedarCreek has fortunately avoided that conundrum by offering complimentary shipping on their thrice-annual shipments, which immediately makes the Platinum Club economically viable for those in even large, well-served communities. The offer of a 15% discount on additional orders is just icing on the cake: 6-bottle mixed lots can be added to any club shipments to piggyback on the free shipping (plus 15% off in the wine shop in Kelowna).

The Platinum Club consists of three annual shipments, each with a different focus: aromatic whites in the Spring/Summer (June), mixed whites and reds in the Fall (September), and the reserve Platinum tier wines in February. I’m not sure what the first February shipment next year will yield, having heard that the 2008 vintage did not produce any Platinum-calibre red wines. (I’m not concerned however, some of the excellent 2007 Platinums, or even older library releases will undoubtedly be well received.) With twenty wines in CedarCreek’s portfolio (including Madeira and two entry-level Proprietor’s blends) club members are likely to receive a bottle of nearly every wine available for purchase each year. 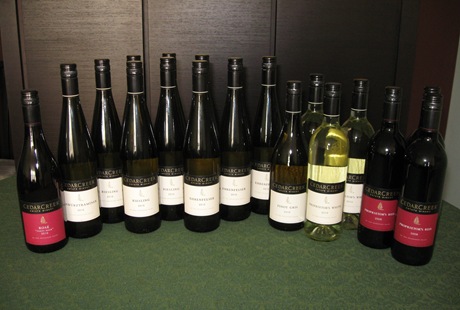 My order included some excellent new wines for Summer – and as you can see I added on some additional bottles, including the well-priced and very food friendly Proprietor’s Red and Proprietor’s White. I’m particularly pleased to have acquired a bottle of the new Pinot Noir Rosé, which has been well-received in its inaugural vintage under the supervision of new winemaker Darryl Brooker, in addition to some respectable medals in competition already. It has great aromas and flavours of strawberries, and should be a welcome addition to the Summer wine list.

Also included in the Summer shipment were two bottles of the racy 2010 Riesling, winner of Best of Varietal at the Okanagan Spring Wine Festival. Having sampled it at the “Bloom” BC VQA Spring Release, and having opened two bottles of my own already I can vouch for Anthony Gismondi’s description of a “citrus theme.” High acidity ensures that there is a lot of lime present in this wine, but paired with the right food it makes a superb Summer sipper: I recently discovered it is excellent with peanut sauce for example. I’m hoping the 2010 Gewurztraminer is equally interesting, with one bottle of this brand new release having arrived as well. It’s not yet listed on the CedarCreek website, nor have any local critics reviewed it to my knowledge, but the wine profile that came with my shipment describes a nose of rose petals benefiting from an extra-long, gentle pressing. The acidity is slightly higher than 2009 – 7.55 g/L vs. 6.28 g/L, but nowhere close to the domain of the Riesling – 12.20 g/L. Less than half as much Gewurztraminer was made in 2010 compared to the 2,843 cases made in 2009, but there should still be enough to go around. I’m actively seeking out Gewurztraminer this year for a change of pace, so I’m looking forward to opening this one when the time is right (CedarCreek suggests a pairing with Green Thai Curry).

Another wine not yet appearing on the CedarCreek website is the 2010 Pinot Gris, although Daenna Van Mulligen recently reviewed it quite positively: I love her suggestion of an Alsatian Onion Tart and plan on enjoying such a pairing soon! Over 4,000 cases of Gris are being released – almost the same number as last year – so you can look forward to plenty of this versatile wine over the next 12 months. One big change from last year is the dramatic increase in residual sugar, going from 0.66 g/L in 2009 to 7.90 g/L listed this year, which probably really ups the sweet peach, pear, and melon flavours.

The final wine Platinum Club members received in their first shipment was the 2010 Ehrenfelser, CedarCreek’s famous “fruit salad in a glass.” The winery likes to point out that so few wineries produce varietal Ehrenfelser that they have earned a mention in the Wikipedia entry for this grape! Sadly barely 100 hectares of Ehrenfelser remain planted worldwide according to that same Wikipedia article, which is a tragedy given the beautiful expression coaxed out of it by CedarCreek. Anthony Gismondi feels that Darryl’s first shot at Ehrenfelser has been very successful, producing a classic patio wine with excellent balance. I’ve tried a couple bottles already and have been quite pleased as well. Although in my opinion the 2009 still holds the crown for pure enjoyment, this newer, more acidic approach retains the intoxicating tropical, floral aromas we fell in love with last year.

CedarCreek wines are widely available in BC Liquor Stores and VQA Wine Stores, but for an easy and economical introduction consider the Platinum Club if you prefer your wines to come to you – it just seems so much more civilized that way ;)

You really make me wish I was in B.C. to taste and enjoy the wines you write about! Well done! Wish someone would write about Ontario wines like that! Love the pairings you suggest also. I truly enjoy reading your blog! Fantastic work Russell! Donna from Ontario