Last weekend my wife and I travelled to Osoyoos for a short trip to celebrate our wedding anniversary – our first trip to the Okanagan in over two years. I’ll skip ahead to our primary conclusions before detailing the trip at length: 1) I really need to visit wine country at least once a year; 2) Said trip should not take place on our anniversary! Fortunately we are still happily married, but by the end of the trip all the tasting, note-taking, and cataloguing had become “work” and not the pure celebration of our relationship we needed – and she deserved! Nevertheless we still enjoyed ourselves immensely and came home with many happy memories, photos, and wine.

One of the highlights of any trip to the Okanagan is the regions you pass through on the way. The Similkameen Valley is my favourite by far; I discovered this beautiful oasis several years ago. As the number of excellent wineries in the valley grows the Similkameen is becoming a destination in its own right for those interested in great BC wine (not to mention the stunning natural beauty evident throughout). Our first stop after a lunch picnic in Manning Park was Herder Winery & Vineyards outside Keremeos. We could not have asked for a better start to our trip as Lawrence & Sharon Herder welcomed us to their beautiful winery and home, and shared some of their delicious, muscular wines. The Herders own close to 15 acres of land, which includes what Lawrence aptly describes as “2 acres of rock” shown in part below. Assuming he doesn’t want to start a rock-climbing school the remaining acreage is put to very good use by Lawrence, producing a small portfolio of primarily red wines, plus a deliciously fresh and fruity Chardonnay that showed deft use of oak. Herder is particularly celebrated for their very well-priced and highly complimented Meritage, one of the best value red blends in the province. This fall should see the release of the 2008 Josephine, their top-tier red blend, plus the 2009 Meritage, both of which I’m looking forward to immensely. 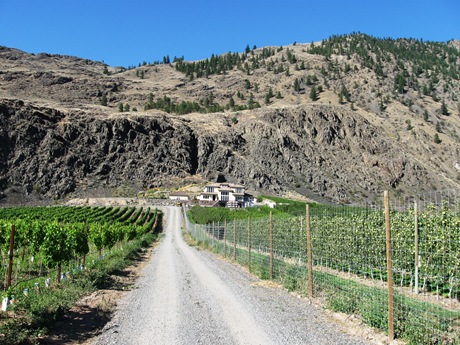 Leaving Herder we travelled south towards Cawston, and our old friend Orofino Winery: we discovered this little gem by accident back in 2005 returning from our first anniversary trip to Summerland. Somewhat “lost” in our first voyage through the Similkameen we stopped for directions at what turned out to be a winery, and left with treats such as late-harvest Muscat with which we delighted in sharing over the winter. The Orofino winery is a unique strawbale building with ideal insulating qualities perfect for the extreme temperatures found in the Similkameen. Looking at the building in the photo below you wouldn’t even know the walls are constructed of sturdy bales of straw covered in stucco! One of the facets of Orofino’s operations I particularly respect is their practice of posting detailed information about the sources for all their grapes, including the Merlot acquired from Kaleden, outside the Similkameen appellation. Among the wines we tasted was that very Merlot – otherwise known as Red Bridge Red – and we found it to be bright and fruit forward, with fairly high alcohol and acidity as well. Many Orofino wines are now sold out but we also got to sample the Riesling, a fresh and dry citrusy wine typical of 2010 BC Rieslings, plus the 2010 Chill, their first ice wine. Only 50 cases of Chill were produced so it’s likely found at the winery exclusively. We found it refreshingly floral, almost herbal in fact, and not as sweet as one would imagine – an acquired taste perhaps but a unique offering and fairly economical as well ($22 for 200ml). 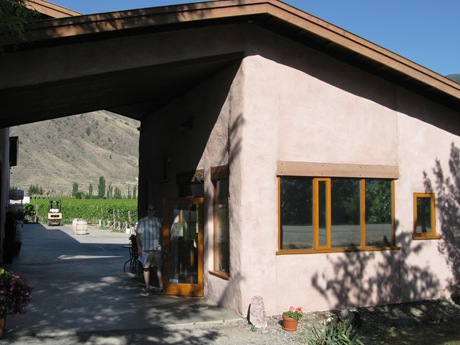 With little time to spare before closing we raced south to the final winery we had time to visit – Seven Stones. Proprietor George Hanson welcomed us with cheer and poured several of his well-crafted wines while we admired the artisan products and jewellery for sale throughout the tasting room. George’s small-lot wines are gaining increasingly prominent awards and some sell out quickly, so we didn’t get to try wines like “The Legend,” his premium red blend. Nonetheless, I was more than happy to sample the regular Meritage, of which the 2008 will be released within days. The 2007 being poured was very well balanced, with a long spicy finish; a worthy follow-up to the multiple-gold-medal-winning 2006 vintage that I am pleased to have in my cellar. Also equally powerful were the 2009 Cabernet Franc – a young, peppery red with delectable plum aromas – and the 2008 Pinot Noir, which gained extra oomph from a Hungarian oak barrel. The tasty 2009 Chardonnay has a complicated back story, as George used two different yeasts and aged half in oak and half in stainless steel, yielding four separate components that were eventually blended to produce a toasty wine with flavours of pineapple and citrus. Last but not least is the 2010 Pinot Noir Rosé, which quite nicely expresses the mineral and sage notes familiar to Similkameen wines. Although we could have stayed and admired the beautiful view across the valley, George’s very punctual dog was gently reminding us all it was dinner-time, and we left with a few bottles in arm and an Osoyoos check-in awaiting us. 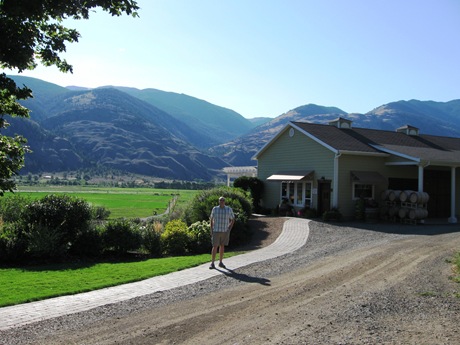 Cellar Highlights – a few of the bottles I acquired this first day:

Hi Russell - great review! Thanks for including the Similkameen Valley Wineries in your anniversary celebration!! Glad you had such a great time in the Similkameen. We really appreciate your kind support and appreciation of our wines and wineries.