A visit to Village Wines Dunbar in early November ensured I could check off another two wines from my to-buy list, including a rare past vintage from Sandhill and a delicious Chardonnay from Mission Hill to complete my 2007 Chardonnay collection. The three Village Wines stores are one of Vancouver's best sources for hard-to-find VQA wines, as well as the occasional unexpected treat!

Mission Hill: Select Lot Collection Chardonnay (2007)
Mission Hill has one of the largest portfolio’s in the BC wine industry, with four fully differentiated tiers of wine under their home label (not to mention their many semi-independent sub-brands). Within the Mission Hill label there sits the Five Vineyards wines, the Reserve tier, the Select Lot Collection, and finally the Legacy Series, home of giants such as the Bordeaux-style blend Oculus. Within their three different levels of “reserve” wines the Selection Lot Collection Chardonnay sits comfortably in the middle. Although the Reserve Chardonnay – at a very reasonably-priced $19 – racks up regular medals at the Chardonnay du Monde competition, this 2007 SLC wine has received a great many accolades itself, and continues Mission Hill’s aggressive pricing structure at only $22. In particular the 2007 SLC Chardonnay was named Best of Category at the 2009 All Canadian Wine Championships, and also received the Regional Trophy at the Decanter World Wine Awards. Buttery, baked apple flavours are often associated with this wine; just listen to Daenna Van Mulligen’s glowing review: “...oozes ripe pear and melon aromas, exotic citrus and praline with warm pie crust, baking spices and vanilla.” If that doesn’t make your mouth start watering I don’t know what will! 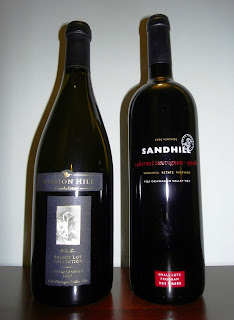 Sandhill: Small Lots Cabernet Sauvignon-Syrah (2006)
The blending of Cabernet Sauvignon with Syrah was pioneered by the Australian wine industry, and has spread to North America as the benefits of this unique blend have become obvious: the powerful tannins and age-ability of Cabernet Sauvignon are an excellent complement and match for the fleshy fruit aspects of the Syrah. As part of Sandhill’s Small Lots Collection winemaker Howard Soon has blended grapes from Sandhill’s estate vineyard off of Black Sage Road south of Oliver. A very positive review from Icon Scores encouraged me to add a bottle of this intriguing blend to my collection, and I am certain Sandhill won’t let me down when I open it next fall. I’m particularly optimistic about this wine’s versatility, as it is reported to stand up well on its own or even with a dessert course of peppered chocolate! Only 363 cases of the 2006 vintage were produced, but I found nearly a full case at Village Wines Dunbar. The 2007 vintage was released in March and recently sold-out at the winery. Although I don’t really have the room in my collection I’ve decided to pick up a bottle should I see one, for it has been hinted to me that 2007 will be Sandhill’s last vintage of this particular blend; VQA stores or the Granville Island Brewery store (which also carries select wines, including Sandhill) might be your best bet before it’s gone forever.
Posted by Russell Ball at 22:16