Two "archive" wines were my third set of acquisitions in November, obtained from perusing the shelves of private stores in downtown Vancouver. I'm often surprised by what I find on store shelves when I least expect it, and in this case I got the rare opportunity to add some back vintages to my collection. 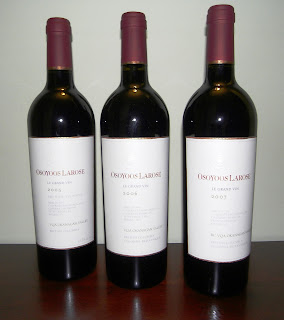 The first vintage of this legendary wine was produced in 2001: a joint effort of Vincor and the French Group Taillan. Growing Bordeaux varietals in southern BC has proven a very successful venture, not only for Osoyoos Larose of course but for a great many wineries seeking to produce powerful red blends. Although I have no hope of ever collecting a bottle of the initial few vintages, finding several 2005 editions in Coal Harbour Liquor Store in late October was a very lucky break, especially considering the 2007 was being nearly simultaneously released. How Coal Harbour managed to hold on to a vintage now two years removed is a mystery to me, but when I returned in early November – after promising myself I would wait until the next fiscal month – there was only one bottle left! Although the 2007 is considered by many to be the “best by any measure” the 2005 was also quite positively received at the time. Now that I have all three vintages from 2005 to 2007 I’m thinking a six-year vertical would be very nice to look at indeed! Fortunately Le Grand Vin easily lends itself to long-term cellaring; this 2005 will still be relatively young in four years when I finally have to make room for the 2011. Six years will be sufficient for my needs however; I’m looking forward to an aged Grand Vin on my birthday each year starting in 2014!
Mission Hill: Select Lot Collection Syrah (2006) 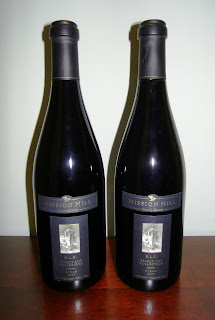 Although I have the 2007 SLC Syrah I actually did not have any intention of purchasing this particular vintage. I was looking for a 2006 Pinot Noir to bulk up my Pinot selection from that year. Having spotted a 2006 Howling Bluff Pinot in Sutton Place Wine Merchant in October I returned with the knowledge it won a Lt. Governor’s Award, eager to add such a well-regarding wine to my collection. Sadly it was nowhere to be found, and the consequences of my (barely restrained) patience once again reared their ugly head! Perhaps “patience is a virtue” should be revised with an addendum “...except in cases of limited resources!” Still in mourning I spotted this Syrah, being familiar with its (excellent) younger sibling. Knowing I still had room in the 2006 rack I quickly digitally confirmed my expectations of excellence and made the easy decision to pick it up. Anthony Gismondi suggested one to three years of aging for this wine in 2009 so it should be perfectly ready to drink in 2011 when I open it up. Of course by then I may have the 2008 SLC Syrah and will want to hold on to all three vintages for a special vertical tasting!
Posted by Russell Ball at 16:22