The second of two recent tastings I attended was also the first formal event I’d attended at the new Legacy Liquor Store: a three-vintage vertical of Joie wines led by self-taught proprietors Michael Dinn and Heidi Noble, both former Vancouver sommeliers and wine industry veterans. Joie is still a fairly young winery, but has attained impressive cult status in the several years since opening: prominent awards have included dual Lt. Governor’s Awards in 2009 for the 2007 Reserve Chardonnay and 2008 Riesling. Grape varieties such as Riesling, Chardonnay, Muscat, and Pinot Noir represent Joie’s commitment to successful cool climate wines originating from regions such as Alsace, Burgundy, and Champagne. 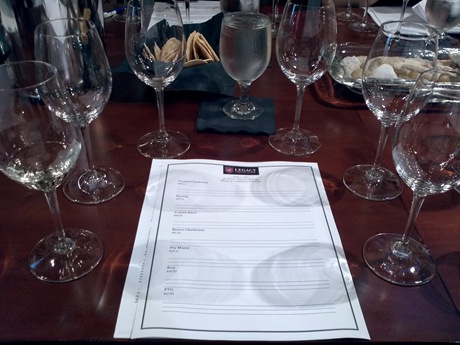 Michael and Heidi led guests – including my wife and me – through four flights of Joie wines, starting with the superb Noble Blend, their tribute to Edelzwicker, “the traditional Germanic-variety blend of the Alsace region of France.” Conveniently Edelzwicker translates to “noble blend” and thus overlaps with Heidi’s surname. We enjoyed the opportunity to taste the 2008 through 2010 releases, which have contained at times up to six different grape varieties from up to twelve different vineyards! (In addition to Joie’s estate vineyard in Naramata they also purchase grapes from growers throughout the Okanagan valley.) Typically Noble Blend contains Gewurztraminer, Riesling, Pinot Gris, and Pinot Auxerrois in differing percentages, but the 2008 also included Kerner and Oraniensteiner. We found that the well-preserved 2008 was dominated by tangerine on the palate, while the younger 2009 (with 60% Gewurztraminer) showed much more grapefruit. The newest release dials down the Gewurztraminer and substantially ups the Riesling component (from 8% to 38%) for 2010, and really impressed us with a delicate floral nose and well-controlled acidity (a challenge from such a cool vintage). Well-priced magnums in dauntingly large Alsatian flutes are available in select stores for Summer party centerpieces!

The single-varietal (but multiple vineyard) Rieslings were next, again from 2008 through 2010 vintages. Joie has purchased Riesling grapes from a few select vineyards for this wine, with large components in each year from 8th Generation Vineyards in Okanagan Falls, themselves known for their own excellent  Riesling varietals. The wines we tried were clearly demonstrating Riesling’s potential for aging, as significant differences were apparent between the vintages: 2008 was showing powerful diesel aromas that Rieslings can be known for, while the youthful 2010 had a much more delicate and nuanced nose. None of these are dry Rieslings either, with high residual sugar ranging from 20 to 25 grams per liter; fortunately balanced by crisp acidity. Even so, all that sugar and acid began to take a toll on our stomachs, requiring dutiful ingestions of water and pleasantly mild “undressed” Gone Crackers.

Moving on to Joie’s well-regarded Chardonnay, we were fortunate enough to get a chance to sample the soon-to-be-released 2009 Reserve Chardonnay in addition to the 2008 and 2007 vintages. Although Joie does produce a very nice unoaked Chardonnay, we skipped to the fully oaked version for this tasting. As with the Riesling, Joie has purchased grapes from other vineyards – often including 8th Generation – for their Chardonnay, after which it is fermented (some naturally) and aged in premium French oak of various ages. Secondary malolactic fermentation and lees stirring are done to enhance the texture and complexity, yielding many classic popcorn, butterscotch, nutty aspects that some people love (myself included, in the proper context). In this case the 2007 was particularly classic in aroma and flavour, reminding us of butter and hazelnuts; the long and memorable finish is why this particular wine is still on my all-time favourite Chardonnay list. The 2008 had a bit more popcorn on the nose, and seemed somewhat juicier on the palate, with flavours of cloves and nutmeg present that reminded me immediately of fresh apple pie. Lastly, the new 2009 Chardonnay had the most floral nose, likely due to the use of much less new oak; it still likely has many years of development ahead of it.

The final flight of wines presented to us consisted of Joie’s only red wine, a unique blend of approximately two thirds Pinot Noir and one third Gamay Noir called “PTG”. Again taking cues from Burgundy, Michael and Heidi have embraced the regional blend of Passetoutgrain due to Pinot and Gamay’s success in the Okanagan. We were able to sample the 2007 through 2009 vintages, and learn about Joie’s experimentation with whole cluster fermentation and foot-treading. In select vintages the grapes with the longest hang-time experience lignified stems (changing from green to brown) and thus contribute fine tannins and complexity to the wine: the 2009 vintage lacked this event due to the early frost but for 2010 whole cluster fermentation was once again instigated at Joie. The three vintages we tried differed substantially in colour, aroma, and flavour: the 2007 had the most expressive nose that my wife described as “toasty blood”, while the 2008 was darkest in colour and much fruitier on the nose with aromas of menthol cherry. The 2009 PTG was the lightest in colour (no surprise given the lack of whole cluster fermentation) with fresh aromas that reminded us of rhubarb and violets. The wide variation in the PTG across the years is a positive thing in my opinion, as it demonstrates the effect of vintage and terroir given that the environmental conditions and source vineyards can differ from year to year – it makes the wine that much more interesting!

In addition to the wines we tried Joie also produces the aforementioned Unoaked Chardonnay, a very popular Rosé, and a relatively rare varietal Muscat that is often snatched up by restaurants. Details are all available in depth on Joie’s beautiful new website, and a slew of recent positive reviews are courtesy of Icon Wines. The Rosé is available in magnum size for Summer fun if your magnum of Noble Blend is lonely!