I’ve attended a couple of comprehensive tastings recently that bear more than a mention, from two excellent wineries at different stages in their young lives. The first is new Kelowna winery Spierhead, which hosted a very classy tasting at the Four Seasons in their gorgeous Yew Restaurant. John Schreiner detailed the evolution of Spierhead late last year, with particular compliments for their first Meritage red – “Vanguard” – and their Cabernet Sauvignon. I acquired a bottle of the 2008 Vanguard along with a CedarCreek Platinum Meritage (2007) a while ago, two wines with a very significant connection in Tom DiBello: Tom was the winemaker at CedarCreek for a decade before leaving recently to spread his wings as a consulting winemaker, which he has done marvellously at Spierhead. 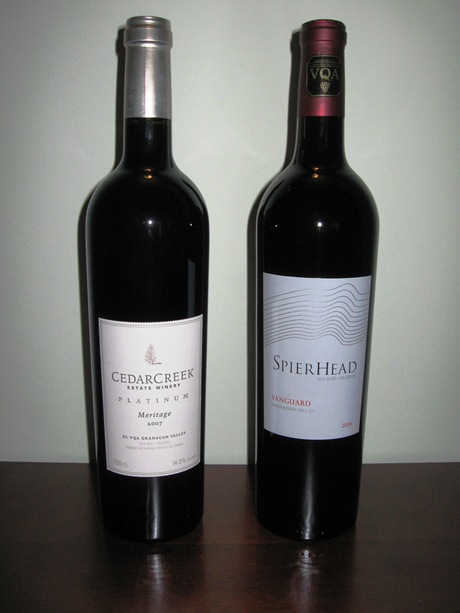 Spierhead’s first release consisted of 2009 Chardonnay and 2008 Merlot, Cabernet Sauvignon, and Vanguard, but they have recently expanded to include Riesling and Cabernet Franc. For this year’s release Tom helped produce two excellent whites – Riesling and Chardonnay, and four quality reds that are just beginning to show their potential: varietal Merlot, Cabernet Franc, and Cabernet Sauvignon, plus the second vintage of Vanguard. So far most of the fruit has come from other vineyards – as Spierhead’s own vines were just planted in 2008 – and are limited to Riesling, Chardonnay, and Pinot Noir. Acquiring the bigger reds from vineyards in the Southern Okanagan is a smart move, given the many quality growers in those warmer, sunnier southern pastures. Even so, Tom cited Spierhead’s “impeccable” young vineyard as one of the reasons he was convinced to come on-board – operators Brian Sprout and Bill Knutson are clearly taking their business seriously.

The vineyard practices and winemaking talent are particularly evident in the two new whites I tasted, which include the first fruit from Spierhead’s 20-acre estate vineyard. The 2010 Riesling has tangy lime flavours common to the cool vintage it represents. The fruit was harvested quite late in mid-November to keep the acidity under control, which was a big challenge in last year’s harvest. The 2010 Chardonnay includes a bit of Oliver fruit to add tropical notes, and acquires beneficial minerality from Spierhead’s own fruit. A very small percentage saw oak, while the vast majority was tank fermented, yielding a very fresh, fruity wine that will be a great Summer sipper along with the equally refreshing Riesling.

The four 2009 reds are naturally quite young, but are already showing impressive balance and ripeness. Although Tom warned guests of some bottle-shock I was pleased to savour each one and look forward to their upcoming release. The Merlot was fairly light in colour with low tannins, but showed fresh red fruit, and got distinctively richer over time. The Cabernet Franc was also light in colour, with more acidity and rustic berry notes. The Cabernet Sauvignon exhibited a rich dark purple tone, and possessed tasty aromas and flavours that reminded me of raisins. The 2009 Vanguard – a blend of Cabernet Sauvignon, Merlot, and Cabernet Franc – has more tannins and acidity than the 2008 version, but both show delicious dark fruit. The blend ratios changed in 2009 to include more Merlot and a bit less of each Cab: Tom believes that Merlot-based Meritage can yield a “bigger” wine in the Pacific Northwest than those that lean on Cabernet Sauvignon. What surprised me most over the course of the tasting was how much each wine evolved as the bottles got the chance to breathe; there’s clearly a lot of evolution to come for these wines, and hopefully even more so from this promising young winery!