Tuesday evening was the British Columbia Wine Appreciation Society annual dinner, hosted this year by Raincity Grill in Vancouver’s English Bay, and paired with the amazing wines of Painted Rock Estate Winery. Painted Rock can be found on the Skaha Lake Bench south of Penticton, where proprietor John Skinner grows 60-acres of grapes to make several award-winning wines. Our dinner was the first time a “mini-vertical” of Painted Rock’s entire production had been assembled: we had the opportunity to enjoy almost every wine released since the winery arrived on the scene in 2009 as the Best New Winery at the Okanagan Fall Wine Festival.

Raincity Grill Executive Chef Jennifer Peters prepared a five-course meal to pair with Painted Rock’s wines – each course to include two vintages, with the exception of the missing-in-action 2007 Cabernet Sauvignon, long since sold out following its Lt. Governor’s Award last year. Although many Wine Dinners are beyond the reach of vegetarians for whom a fixed menu centred on meat is prohibitive, Raincity was happy to provide for a fully vegetarian option! The vegetarian menu overlapped by about 50% with the regular menu, and had clearly been carefully considered to pair with the wines – much appreciated! 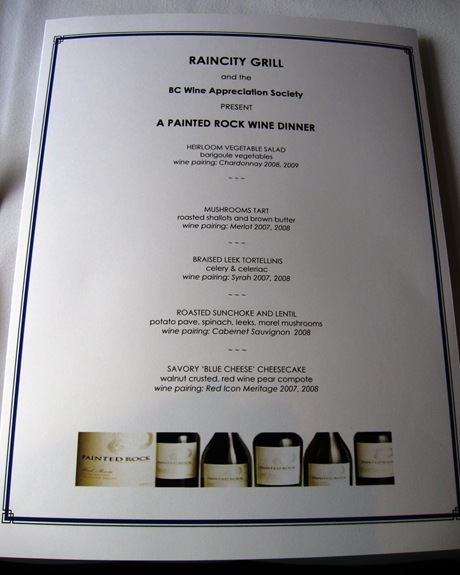 We began with a flight of Chardonnay, and in contrast to the potted prawns served to most guests, we enjoyed an Heirloom Vegetable Salad with our wines. Sunchokes, beets, and carrots were served with a mixed green salad that included generous amounts of parsley. The somewhat bitter flavours served to enhance the oak flavours in the wine, and also demonstrated the difference between the 2008 and 2009 Chardonnay. Although the 2009 was on oak a couple of weeks longer than the 2008, it had integrated more elegantly, whereas the 2008 had more obvious toasty, popcorn aromas. John explained in detail how the different vineyard treatment in 2009 (leaf thinning) changed the expression of his two Chardonnay clones to bring out the tropical flavours we were enjoying. 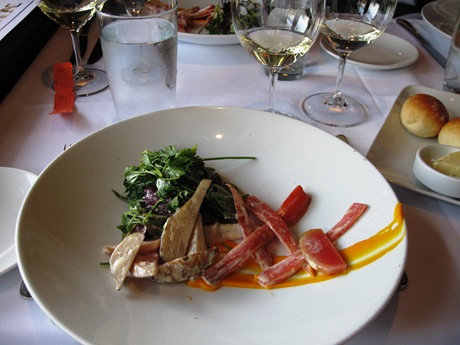 Painted Rock produces only one white wine – the Chardonnay – so for the remainder of the night we moved onto to the many celebrated reds in their portfolio. The fantastic second course of mushroom tart and roasted shallot was shared across all diners, and paired with the 2007 and 2008 Merlots, the 2008 having been just released recently. John recalled his nervousness about his first vintage of Merlot, and how his trepidation was put aside when the wine won Best of Varietal at the Okanagan Spring Wine Festival last year. It went on to wine a Silver medal at the Canadian Wine Awards and Gold at the BC Wine Awards in the Fall! The 2008 vintage was more challenging, and Painted Rock had to drop nearly half the fruit to ensure a ripe harvest, but so far the wine is being received very well. I found the 2007 to have good acidity and fine tannins, with prominent cherry flavours, while the 2008 had an even more fruit-forward nose that became savoury after time in the glass. 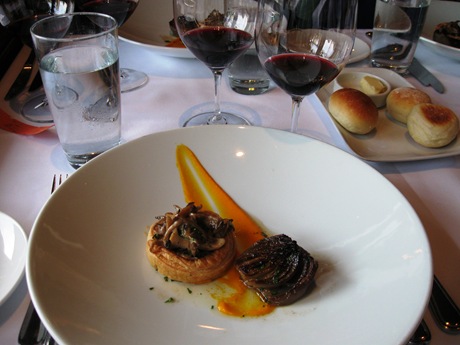 The much anticipated Syrah was next up alongside tortellini – bison for the carnivores, and braised leeks (and plenty of butter) for us vegetarians. With two different Syrah clones in the vineyard John had initially thought about releasing a “Syrah” and  “Shiraz” but was set straight by his Bordeaux consultant Alain Sutre. Alain pointed out that when it comes to grapes “1 + 1 = 3”, i.e., blending both clones would undoubtedly produce a superior wine than either could yield alone. The 2007 Syrah had a nicely perfumed nose and red fruit flavours, with a silky soft mouthfeel. John was proud to point out his wine had been the only Canadian wine served at the recent Playhouse Wine Festival Bacchanalia Gala Dinner, a prominent coup indeed. As good as the 2007 was we enjoyed the 2008 even more: it had an even more expressive nose, a bit less acid, and an equally smooth mouthfeel, with cherries and pepper present on the palate. The challenge will be to find it in stores given the reduced production in 2008, unless of course you order directly from the winery. 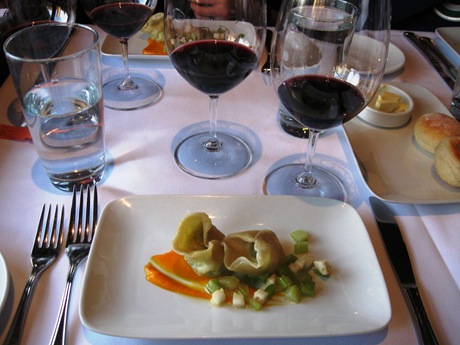 Our fourth (vegetarian) course was another modified version, replacing the beef ribeye with roasted sunchokes and lentils, alongside the carefully assembled potato pave, spinach, leeks, and morel mushrooms everyone received. For this course a vertical of Cabernet Sauvignon was not available, so we enjoyed a larger glass of the 2008 vintage. The Cabernet was actually the first 2008 red released by Painted Rock, showing up in stores as early as last Fall! My guess would be that the 2007 sold out so quickly that John needed something for store shelves and restaurant wine lists! Although I can’t vouch for the wine’s approachability several months ago it is actually quite delicious now despite its youth. Surprisingly fine tannins and rich, dark fruit flavours made this a great pairing with the food, and probably our second favourite wine of the night (after the 2008 Syrah). I would have loved to try it against the 2007 but John was quite clear in asserting that he only has 17 bottles left after the Lt. Governor’s Award ceremony and subsequent positive press depleted his library. 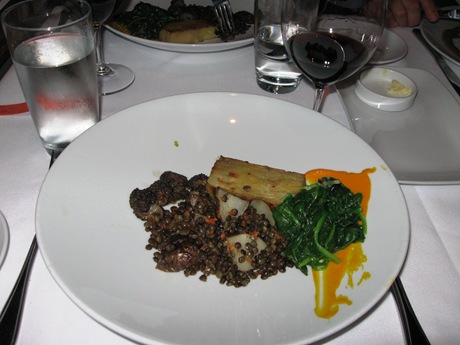 The final course of the evening was an unconventional savoury blue cheese cheesecake to pair with the two Meritage blends ‘Red Icon’ 2007 and 2008. The walnut crusted cheesecake initially confused the palate but along with the accompanying red wine pear compote it paired quite well with the rich red wine. The 2007 Red Icon also received a Lt. Governor’s Award, but I managed to acquire one bottle before it sold out. The 2008 is unique in that it doesn’t include any Cabernet Sauvignon, and significantly more Petit Verdot than one would expect (20%). Both wines have particularly complex aromas within which you can almost smell the different components intertwining. On its own the 2008 showed its elegance more so, with youthful but promising tannin structure and sweet berry flavours. Until John starts producing dessert wines it seems the Red Icon can show quite well even with the “dessert course”! 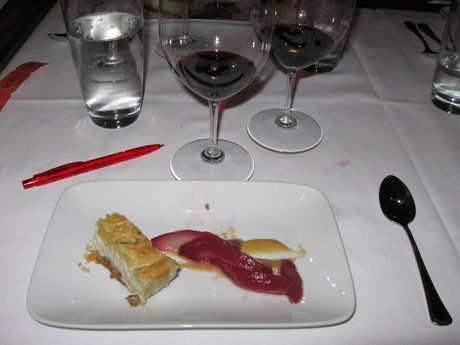 My big thanks go out to the BCWAS Executive for their hard work in organizing the dinner, and to Raincity Grill and Chef Peters for excellent service and delicious food. Lastly, thank you to John Skinner for sharing his wines, his time, and his enthusiasm with us all!