Last month I received my first shipment of wines as part of Tinhorn Creek’s Crush Club – a mixed half-case of new Summer wines – and I have now discovered some of the other benefits to the Club: “Member Only” events! Members recently received an invitation to join Owner/Winemaker Sandra Oldfield at Goldfish Kitchen in Vancouver for a Cellaring & Aging Seminar featuring old and new vintages of Tinhorn Creek wines. My wife and I were very happy to attend and get the chance to sample past vintages we’ve never tasted, and to hear Sandra reflect on how her wines have changed over time. 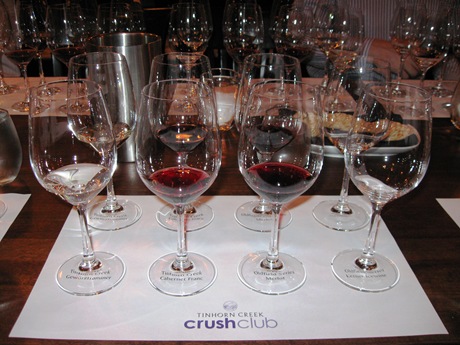 Laid out before us were four very different Tinhorn Creek wines, spanning several unique vintages: Gewurztraminer, Cabernet Franc, Merlot, and Kerner Icewine. For each wine two vintages were presented, separated by 4-5 years, but from the same vineyard blocks, as Sandra was careful to point out. Tinhorn’s cellaring strategy is to hold back 10 cases of each red wine and 4 cases of each white wine every vintage for research purposes; plus they can host special events such as this! (The winery’s recently opened Miradoro Restaurant is also significantly benefitting from the ability to serve library wines.)

The newly released 2010 Gewurztraminer is beautifully perfumed with classic floral notes. It has generous residual sugar at a listed 11.3g/L but that seemed like just the right amount upon tasting. On the palate we noticed fresh green apple crispness and tropical notes that will be enjoyable in Summer, should it ever arrive. The four year-old 2006 vintage was dramatically different, having lost the fresh perfume found in newer releases. We also noticed that the colour of the 2006 wine had become darker – more golden in tone as it has aged. Sandra mentioned that even older vintages of this same wine are available in Miradoro, and that over time the wine takes on surprising green notes (think mint and green beans) which defy categorization. These older vintages are not bad, per se, but almost indistinguishable as Gewurztraminer.

Tinhorn Creek takes pride in producing a relatively rare varietal Cabernet Franc, which Sandra feels really benefits from the South Okanagan terrior. The newest release, which came out last year, is from the 2008 vintage and is pitched by Tinhorn as a superb pairing for winter comfort foods (lasagne, chili, mac & cheese) and summer barbecue. We recently enjoyed a bottle with (veggie) burgers and fries, and loved the bright red fruit and fresh acidity. Some critics agree that it’s ready to drink now but others feel it could benefit from additional aging: it all depends on how you plan to use it I think. On the other hand, the 2003 vintage is the kind of wine you can – and probably should – drink on its own. It has darkened in colour over time and seems more toasty and earthy on the nose, but the tannins and acidity are still present, making it a very enjoyable mature wine. I still have to say I prefer the 2008, given its versatility and almost refreshing characteristics, but it is great to know this Cabernet Franc can age gracefully like other reds which often get more credit – I’m looking at you Cabernet Sauvignon.

The Reserve Series Merlot at Tinhorn Creek is named after Sandra, and she begrudgingly reminded us of the days when each bottle label proudly depicted a cartoon version of her face! The new 2007 vintage (revised to read Oldfield’s Series rather than the older Oldfield’s Collection; for marketing reasons) was also released last year, to very positive reviews, helped along no doubt by the extensive and patient bottle-aging (15 months). It is a warm and spicy wine, with many years still ahead of it, especially given the secure Stelvin screwtop closure. The older 2003 vintage showed similar characteristics, but in a more mature way; the kind of wine you could enjoy sitting by the fire, as my wife put it. The acidity is still showing well, and I think the inclusion of 13% Cabernet Franc (and 1% Syrah) will help maintain the complexity over time. (The 2007 contains 5% Cabernet Franc and 3% Syrah.) Tinhorn Creek is currently selling a very attractive six-bottle vertical of Oldfield’s Merlot in a custom wooden crate for collectors: you could drink the 2001 now and replace it with a 2007 – and so on each year – to keep the vertical intact indefinitely!

I have very little experience with icewine, finding it challenging to convince myself to spend twice as much as a very good bottle of table wine for half the quantity (e.g., 375ml)! However, it can be a vibrant sensory experience worth trying every once in a while, as I discovered through Tinhorn’s Kerner icewine. The wine comes in a rather petite 200ml bottle but at least it retails for only $30, leaving you with money left in your pocket for some cheese and fruit for accompaniment. The newest release comes from the 2009 vintage, which experienced a very cold harvest, leading to a fairly sugary icewine (280 g/L) in which you can actually smell the sweetness! Although slightly syrupy the naturally high acidity keeps the wine very palatable, and the incredibly fresh fruit flavours blew me away. In contrast, the 2005 wine is very different, having begun with lower residual sugar (due to somewhat warmer temperatures during harvest), and having experienced a few years of aging. Assuming you are willing to brave the risks of cork taint icewine can age for decades; Sandra explained how it can take on caramel, nutty notes over time – a bit like a Sherry – as the golden-hued 2005 was beginning to exhibit. Although the 2009 seemed like it could help along a bowl of fresh fruit, the 2005 was much more of a solo sipper with which to end the night. Sandra asked us how we felt about receiving a bottle of icewine (versus a larger bottle of table wine) in our annual allotment and I have to say after this tasting I’m happy to accept it!

Following the tasting we enjoyed some socialization and further samples of Tinhorn’s new releases, including the very rare and very tasty Cabernet Franc Rosé, available exclusively to Crush Club members and at the Miradoro Restaurant! Delicious canapés by the talented chefs at Goldfish Kitchen paired nicely with the Rosé and other wines, including the 2Bench White – a complex blend of Chardonnay, Sauvignon Blanc, Semillon, and other grape varieties. I especially enjoyed speaking with Donna-Lee Arnold, the new Crush Club Coordinator, about her recent entry into the wine world following a career in commercial banking – she’s picking up the lingo at a fast pace! The whole evening was very informative and enjoyable; Tinhorn Creek certainly knows how to make their fans feel special!