This month’s “wine club” dinner included a blind tasting to compare a unique Canadian varietal wine against its Old-world counterpart, plus a tree-fruit dessert wine from the beautiful Naramata bench. 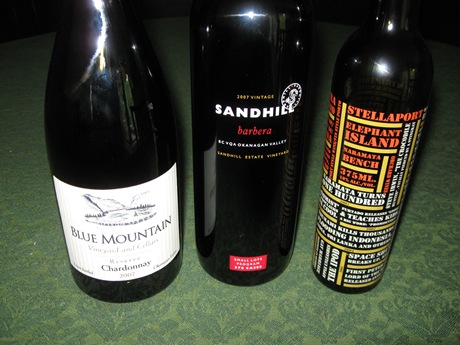 The evening started with a delicious appetizer course of puffed pastry vegetable tarts topped with ricotta cheese. The wine pairing came from celebrated Okanagan Falls winery Blue Mountain – their 2007 “Stripe Label” Chardonnay. Blue Mountain eschews the term “Reserve”, in favour of the Stripe Labels affixed to their selected lot wines; as John Schreiner explains: “the word ‘reserve’ had become meaningless”. With many mediocre, cheap wines from around the world labelled “Reserve” the stripe label is used instead to designate an extra special wine at Blue Mountain. The Chardonnay we enjoyed came from an excellent vintage, with a light, tropical nose and very well balanced use of oak (it is only 50% barrel fermented). The toasty aromas and creamy mouthfeel associated with some Chardonnays were not present, but we agreed that the vinegar and cumin in the tarts may have unduly influenced the experience. I think this wine likely could have benefited from more time in the cellar to further mature; I have a bottle in my own collection that I’ll probably open this winter (although I’m sure it could last longer). 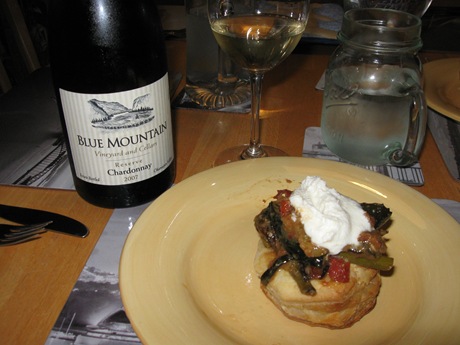 Our dinner entree was a very appetizing “deluxe” mac & cheese, containing Fontina, Gruyere, Parmigiano, and Pecorino! Baked to a crispy finish in the oven and served with a fresh mixed green side salad it was something anyone could agree with! 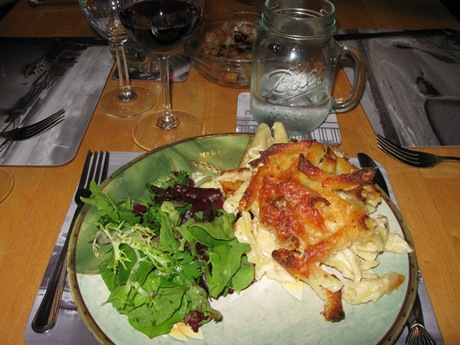 For our dinner drinks we were presented with two bottles wrapped in paper, with the forewarning that one was from British Columbia, while the other came from overseas; gasp! The first bottle was a marvel of sweet earthiness, with very smooth tannins plus vanilla and caramel notes that lingered on the palate. Aromas of cherries, berries, and currants were detected, and a very slight brown tint suggested a somewhat mature wine. In comparison, the second wine showed relatively more acidity and a shorter finish, with suggested aromas of walnuts and cotton candy, among others. Being more fruit forward, we felt it would befit a spicy tomato dish more so than the cheesy pasta we were enjoying. We were left to guess which wine came from local grapes, and which had travelled from afar – I crossed my fingers for the heavily favoured first bottle! Our host hinted at an Italian varietal and my mind went immediately to Sangiovese or Barbera, knowing their position in Kelowna winery Sandhill’s Small Lots portfolio. I was rewarded when the reveal showed our favourite as the Sandhill 2007 Small Lots Barbera! Given its apparent maturity we were all surprised that the the other wine – an Italian original – was actually from an earlier vintage year. The consensus around the table was that a few more bottles of Sandhill Barbera would be a wise purchase for all of us, and fortunately it still shows up on some store shelves, despite only 270 cases produced. Keep in mind that this is the Okanagan’s only Barbera, so don’t pass up a chance to try a very rare and unique wine! 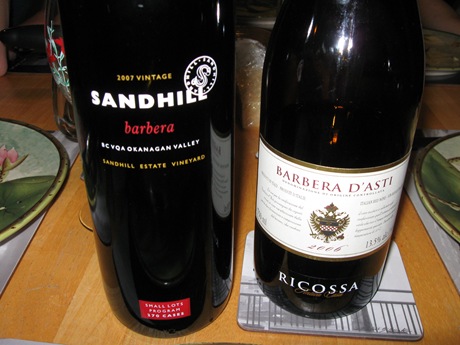 Our dessert course was something my wife had thought of a few weeks ago – ice cream sandwiches! Of course they would have been even better had the weather cooperated with a bit more warmth, but we didn’t want to wait until August, when we are next scheduled to bring dessert. I had been eyeing the Elephant Island Stellaport for a while and this seemed like a pairing that could work well. Stellaport is a Port-style wine made with Stella cherries, produced using the solera style, resulting in the latest release including eight different vintages from 2001-2008. The beautiful bottle is printed with headlines from each of the years that comprise the blend; it’s quite a keepsake. 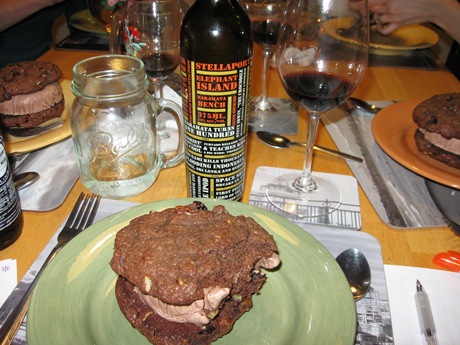 Premium organic chocolate ice cream was complemented by some giant chocolate cookies I made that very morning, which included chopped pecans, chocolate chips, and dried organic cherries. The cookies were soft, so as to avoid the dreaded ice-cream-squeeze-out that can occur when biting into a sandwich made with dense, crisp cookies. The finished product was a thing of beauty, I won’t deny it, but the wine was no slouch either: rich and chocolatey, with noticeable cherry notes that reminded you it wasn’t a grape wine. On the nose we found savoury elements that reminded some of curry powder, with a spicy finish that suggested it might actually pair well with Indian food, believe it or not! Although some of us couldn’t manage to finish the enormous ice cream sandwiches (I won’t name names to spare them the shame), we finished the Stellaport handily!

I think you need to send some of your giant chocolate cookies to Aunt, they sound spectacular!