I’ve had the desire for a tasting of local Cabernet Franc for quite some time, and finally got the chance this past weekend to host a few friends for some tasty summer food and excellent BC wines! My decision to focus on Cabernet Franc came about due to the growing popularity of single varietal wines from this sometimes-maligned grape, which can offer much more than a minor (albeit important) component of Bordeaux-style blends. In fact, many people remain unaware that Cabernet Franc is one of the parents of the more well-known Cabernet Sauvignon grape – which is used for many legendary varietal wines the world round. In British Columbia Cabernet Franc has much more potential than Cabernet Sauvignon, with the ability to bud and ripen up to two weeks earlier – critical in this cool-climate wine region. Cabernet Sauvignon grown in BC often has trouble fully ripening, and as a result green notes can easily find their way in, yet wineries no doubt feel pressured to produce varietal Cab Sauv to meet the desires of consumers who are familiar with successful (and readily ripe) wines from France, California, Australia, or Chile. Wine Access magazine did not mince words in last Fall’s Canadian Wine Awards when reporting that the judges “agreed Canada should not focus on Cabernet Sauvignon.” As a result, it may be Cabernet Franc’s time to start shining more brightly, and fortunately a bevy of successful Francs are present in BC, and more follow each year as producers learn the advantages of working with this grape.

For our tasting I sourced several wines from producers big and small, and friends brought a few more: amazingly not a single bottle overlapped amongst the six of us! As it turned out, we had a few more bottles than we could healthily consume in one evening, but I tried to ensure we opened a variety, while paying appropriate homage to those on which we missed out. In fact, one of my favourites – from Tinhorn Creek – never made it to the table during the tasting, but that’s not to say it doesn’t deserve recognition. Tinhorn Creek has produced a single varietal for over a decade, always coming in at a very reasonable price: for only $18, the 2008 version gets top marks in my book as a go-to red; I’m learning to always keep a few bottles around for both special, and not-so-special occasions. In this case we started out the evening with Sandra Oldfield’s “Half-Screwed Sangria”, which included a full bottle of Tinhorn Creek Cabernet Franc along with generous proportions of brandy and Triple Sec. Although it almost seemed a shame to “waste” the subtleties of this wine in sangria, I figured if it’s good enough for Tinhorn Creek’s Owner/CEO/President/Winemaker it’s good enough for me! The sangria was a huge success, but I definitely recommend adding some of the “optional” soda water to thin it out a little! 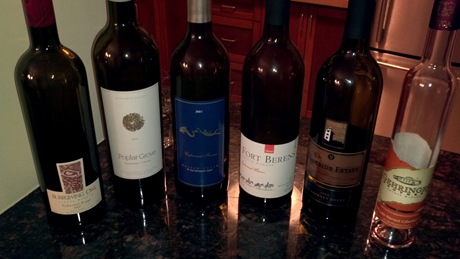 With our palates loosened up from brandy and our plates loaded high with burgers, corn on the cob, and hearty salads, we delved into our first Cabernet Franc from well-known producer Burrowing Owl. This 2007 version really nailed it with a Gold medal at the 2009 Canadian Wine Awards and a resounding 91-point review from Anthony Gismondi. Despite the release of the 2008 vintage the 2007 can still be found in many stores, which is fortunate because I thoroughly enjoyed it! The ripe, dark fruit aromas and well-integrated tannins put a smile on my face immediately, and made me glad I have a bottle in the cellar.

We followed quickly with another 2007 from equally proficient Cabernet Franc producer Poplar Grove. I was quite impressed with this wine at the Playhouse Wine Festival earlier this year, which was where I picked up my own bottle, but hadn’t heard much else about it until recently. At the same time we were drinking ours, a couple of well-known local critics were also delving into this delight: recent reviews from Daenna Van Mulligen and Anthony Gismondi both sing the praises of Poplar Grove’s achievement. For what it’s worth, this one eventually came out on top at the end of the evening, with a texture even smoother than the Burrowing Owl, and pleasingly delicate hints of floral herbs amongst the vanilla aromas.

The final bottle from the 2007 vintage came from Hester Creek, which scooped a Gold medal at the 2010 BC Wine Awards. Although this wine is fairly difficult to find now following the release of the 2008 version under slick new labels, I figured the extra year of aging could only serve to benefit our experience. The prominent vanilla aromas reminded some of us of chocolate chip cookies, but nice ripe fruit was also present on the nose. The acidity seemed fairly high, and meaty flavours were also present that conjured up bacon and sausage. The newer release has received positive press from both John Schreiner and Icon Wines, and should be ready to drink now despite a few bottles of the 2007 floating around in stores.

Our dinner nearly complete, we took a short break for a delicious dessert of homemade strawberry shortcake, and a thematically-appropriate Late Harvest Cabernet Franc from Gehringer. Along with Gehringer’s Late Harvest Riesling, it’s a well-priced treat that isn’t too sweet or syrupy, and suitable for plenty of occasions; plus it goes quite well with strawberries.

We moved on to the 2008 vintage with a wine from a less well-known producer in Lilloet: the Fort Berens Cabernet Franc was produced from south-Okanagan grapes while owners Rolf and Heleen await first harvest from their own vineyard this year. Like the Hester Creek, this bottle has also been supplanted by the following vintage (in this case 2009), but I was lucky enough to find a few in Village Wines Dunbar. Solid reviews for some of their initial production bode well for Fort Berens; this wine has done well via positive reviews from Icon Wines, Daenna Van Mulligen, and others. Our experience yielded fairly herbal, floral aromas – once someone suggested dill I had trouble thinking of anything else. It was definitely the most savoury wine of the night, and unfortunately we had finished most of our dinner by the time it was opened, as the high acidity and very dry approach would pair well with food. I look forward to seeing if Fort Berens continues with Cabernet Franc via their Lilloet vineyards; in the meantime try the 2009 vintage in stores now.

Filled up with food and wine, we decided on one more bottle from Naramata producer Hillside. Experience over several years has led Hillside to settle on Black Sage fruit for their 2008 version, which is where a lot of top-quality Cabernet Franc seems to come from. Once again I suspect this savoury wine would have benefited from the hearty burgers we enjoyed earlier in the evening, but there is only so much food and wine one can consume at once. Reviewers such as Daenna Van Mulligen point out the benefits of “tangy tomato-based sauces” in addition to the grilled meats that Anthony Gismondi suggests.

The five Cabernet Francs that we tried represent only a portion of those produced in BC, and pleasingly I could have easily held another tasting the following night with others from wineries such as Herder, Nichol, Pentage, Sandhill, Seven Stones, SpierHead, and Sumac Ridge. Herder’s ultra-small-lot (104 cases) release from 2008 is particularly exciting, and I’m pleased to have recently found a bottle for my collection in Sutton Place Wine Merchant; John Schreiner describes it as “a powerhouse…that makes a statement.” I encourage you to experience some of these interesting terroir-driven wines that showcase BC’s potential particularly well. As one final example of how Cabernet Franc has a bright future here witness Painted Rock’s 2008 Red Icon: without using any Cabernet Sauvignon at all this big red blend relies upon 25% Cabernet Franc to work with Merlot, Malbec, and Petit Verdot for a wine Anthony Gismondi describes as intense, yet supple. Cheers!

*For those of you without access to something the size of a wine barrel in which to mix the original recipe, here is the single-pitcher version of the Half-Screwed Sangria:

No inclusion of Fairview's Cab Franc?

Thanks for the reminder Rayna; I knew I would forget at least a couple! I also unintentionally omitted Van Westen's "Vrankenstein", another lovely wine almost impossible to find in stores unfortunately.