Earlier this month the BC Wine Appreciation Society hosted a tasting of wines by Fairview Cellars, the small but celebrated winery run by Bill Eggert. The tasting was focused on a very rare seven-year vertical of Bill’s premier Meritage blend “The Bear”, ranging from 2003-2009 vintages: a “Meritage Christmas” if you will! This event was particularly noteworthy as it represented the first tasting since I joined BCWAS that has focused on just one wine; most tastings cover a winery’s larger portfolio, often spread across just one or two vintages. Getting the chance to watch one wine, under one winemaker develop over seven years was a valuable lesson in winemaking and British Columbian viticulture.

I myself have been collecting Fairview Cellars wines for only a couple of years, having been first turned on to Bill’s talents by Icon Wines. After getting the chance to actually taste the wines at several events, and finally at the winery itself this summer, I’ve been hooked on the many superb small lot wines Bill produces. Icon Wines’ Liam Carrier visited Fairview Cellars last year for a barrel tasting, and I bumped into him in person at Bill’s table at the VQA Fall Release “Colour”, where we both thoroughly enjoyed the 2009 wines. (Icon Wines recently named Fairview Cellars’ “The Wrath” Cabernet Sauvignon their 2011 Icon Wine of the Year.) For even more information about Fairview Cellars and Bill Eggert have a look at the December BCWAS Newsletter, which features not only an interview with Bill, but a story by BCWAS Events Coordinator Kristal Kaulbach about the ageability of Bill’s wines. 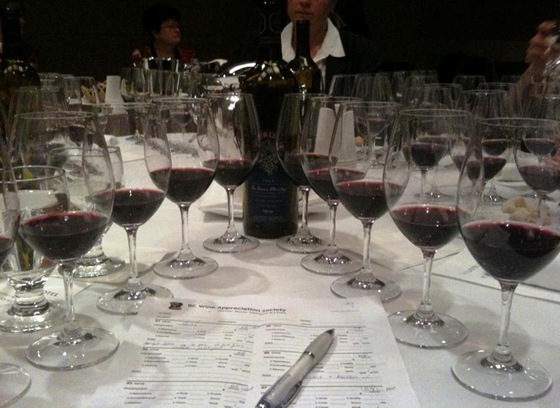 Going into the tasting this month attendees were not only treated to seven different vintages of The Bear, but also component tastings of the 2008 Merlot, Cabernet Franc, and Cabernet Sauvignon, the primary components of the blend (starting in 2008 Bill introduced Malbec and Petit Verdot in small quantities). The Listel Hotel provided delicious appetizers to complement the wines, and guests enjoyed beef tenderloin with smoked chocolate and cumin, grilled mushroom & eggplant Aranncini with sweet smoked tomato puree, Little Qualicum Blue Claire cheese and stone fruit compote, and braised Peace Country lamb with caramelized onion tart. Once again the staff at the Listel, along with the many BCWAS volunteers who set up the room provided for an excellent experience – good thing too as the event was sold out to one of the largest audiences yet!

Similar tastings hosted by the BCWAS have typically involved the winemaker and/or proprietor guiding guests through the wine flight glass by glass, but Bill – true to his nature – threw caution to the wind and let us individually taste however we wished after a short introduction. Walking around the room he interjected now and then with factoids but mostly just chatted with individual tables on a one-to-one basis. As we tasted through the Bear vertical one thing became immediately obvious: Bill’s consistency was going to make for a challenging experience differentiating the wines. Limited vintage variation was present (Bill pointed out 2003, 2005, and 2009 were particularly hot years) but overall the wines were unusually similar year to year – even the colour remained remarkably consistent! Having tasted some BC reds from vintages in the early 2000’s I’ve seen the loss of primary fruit that can occur at times, so it was very relieving to smell the rich, almost Port-like, aromas coming off the 2003 Bear. The wines slowly got more tannic as they got younger, but overall they all showed the ability to continue to age well for years to come. Even Bill was pleasantly surprised, having not engaged in such a vertical tasting himself for quiet a while!

While Bill doesn’t often widely publicize the release of single varietal bottlings, they do show up in stores from time to time, the varietal Cabernet Sauvignon being the most highly publicized and available. Our three varietal samples from the 2008 vintage were all quite tasty on their own, and helped illustrate how the final blend is constructed. The Cabernet Franc showed herbal characteristics and possessed the brightest fruit, while the Cabernet Sauvignon was rich and smoky, with a hint of sulphur on the nose. The most exciting varietal for me was the Merlot, as had I not know its identity in advance I might have been tempted to suggest it was Syrah given the spicy, peppery notes that sprung forth from the glass. In combination with the highly talked-about delicious Bear samples the varietals showed off the talents of an industry veteran that we all felt honoured to have enjoyed. Thanks for sharing, Bill!