To celebrate my birthday last week I opened a few bottles of great BC wine with friends: some were new releases I was eager to share, and others came out of the cellar for our enjoyment. A Rhone theme became apparent when we started with a three-year vertical of Viognier, and moved on to a bevy of Syrah; finally finishing with a Meritage blend and a delicious fortified wine from the Naramata Bench. 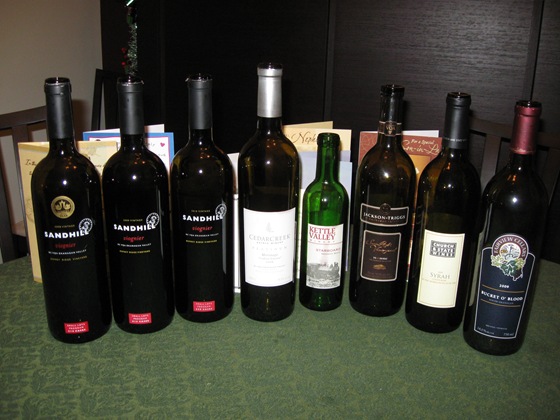 A late lunch of sushi was an excellent opener for the Sandhill Small Lots Viognier I had collected over the past couple of years. At the 2009 Canadian Wine Awards Sandhill dominated the competition by winning Winery of the Year and scooping both Red and White Wines of the Year. The 2007 Small Lots Syrah was Red of the Year, and the 2008 Small Lots Viognier was named White Wine of the Year, prompting me to find a few bottles. My final bottle was now ready to be opened along with the 2009 and 2010 Small Lots Viogniers. The 2008 was first and I was happy to see that two and half years of bottle age had done little to dampen the complex, honeyed flavour profile. The golden colour was quite appealing, and while the wine was sweet, the acidity kept it balanced and retained the freshness for which it received so many accolades two years ago.

When it came time to serve the 2009 Viognier I was dismayed to see a much darker-coloured wine in the glass – not a good sign. Whatever fault (likely oxidation) had assaulted this bottle had led to a flat and flabby texture with none of the bright fruit and intense flavours of the earlier, much more well-preserved vintage. Although I was disappointed it also represented an exciting learning opportunity to witness how a wine can go bad – the photo below barely does justice to the striking difference in colour (from left to right: 2008, 2009, 2010). Fortunately the 2010 vintage redeemed the flight and cleansed our palate with the brightest, freshest flavours and an almost slightly effervescent texture. I was glad to have enjoyed the final wine as recommended – in it’s youth. 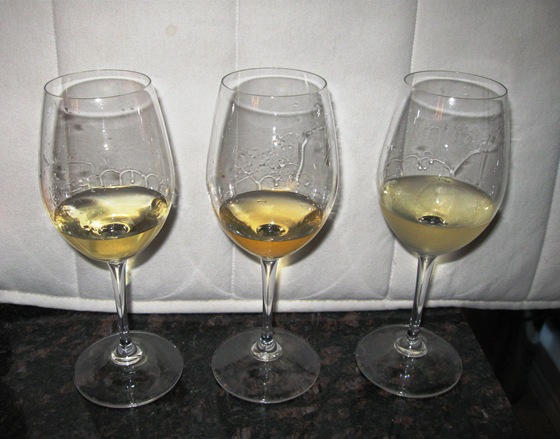 As the night grew longer it came time for a few richer reds to complement the dizzying cheese platter we assembled – arranged geographically for our own amusement. I was able to pull another Canadian Wine Awards champion from the cellar in the form of Jackson Triggs’ 2006 Sunrock Vineyard Shiraz, the 2008 Red Wine of the Year. With a nose rich in dark berries and peppery mesquite it lived up to the glowing review Anthony Gismondi had given it back in 2008, with equally impressive “glossy textures” today.

Those smooth tannins were not expected in the other two Syrahs available – both from the 2009 vintage – but each represented wines I wanted to test with friends in the present before aging my remaining bottles. The Church & State Coyote Bowl Syrah continued the Canadian Wine Awards theme, as it only recently was announced as the 2011 Red Wine of the Year. The group described a wide variety of characteristics including aromas of blueberries, blue cheese, and toast, while the flavour profile after decanting took on an herbal, floral note somewhat reminiscent of Cabernet Franc. It was much mellower than I recalled from earlier tastings, and showed how decanting can sometimes change a wine substantially. A change had also taken place in the Fairview Cellars Bucket o’ Blood we enjoyed next: from initial aromas of blood, balsamic vinegar, toffee, and dried roses it actually became fruitier after decanting. This Syrah-Cabernet Sauvignon blend is likely a promising cellar-dweller, and winemaker Bill Eggert suggests opening after 2013, but I just couldn’t wait to share a wine with such an entertaining name! Although we didn’t have any tangy ribs to pair with it as Liam Carrier suggests, some of the more flavourful cheeses did just fine alongside this rich and delicious wine.

With our short exploration of the grapes of Rhone complete we moved on to the big blend of CedarCreek 2006 “Colbert Edition” Meritage. A few years ago CedarCreek acquired some very hard-to-get barrels made from 350-year-old French oak and carefully selected a Merlot-dominant blend to age for 21 months. The 144 cases produced are few and far between but as a Platinum Club member I was very pleased to receive this storied wine. Aromas of smoky berries gave way to a powerful wine, brighter than expected, and quite smooth and approachable already. The Colbert Meritage recently ranked sixth at the Sip Wines Icon Red Tasting, as well as receiving a silver medal at the 2011 Canadian Wine Awards. Although we were surprised at the approachability (albeit after decanting) the consensus seems to be that it could continue to age a few more years.

It being my birthday I decided on a final wine to sweeten the evening: Kettle Valley Starboard. This Port-style fortified wine is made from Malbec and Petit Verdot grapes, and has recently been renamed “Caboose” to fit with other train-themed names from Kettle Valley. It’s hard to go wrong with a fortified blend of those two rich grapes, and the “long elegant finish” of Starboard provided for some mellow reflecting time as we surveyed the decimated cheese platter and numerous empty glasses and decanters. With even more great wines in the cellar – and always in need of room for more – I see no reason not to make this an annual celebration!