Holiday Wine with Friends and Family

For fans of great wine the holiday season represents an excellent opportunity to open up some of those special bottles you’ve been saving all year long, or perhaps significantly longer! While you don’t need a particular reason to share and savour a great bottle of wine, I know that I find myself looking for an excuse that Christmastime joyously provides. While we partook in more than a few delicious wines throughout the month of December below are a few of the standouts from closer to Christmas Day itself. 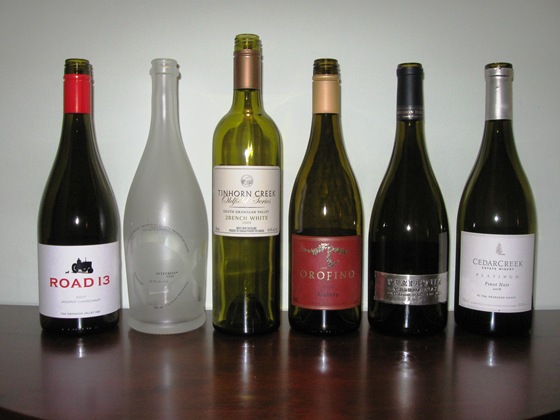 Road 13 2007 Jackpot Chardonnay: On Christmas Eve we noshed on butternut squash and spinach risotto alongside a bottle of Road 13’s top-tier Chardonnay. Now that the winery has shifted to blends, it’s actually their only Chardonnay, as the “Stemwinder” Chardonnay-Sauvignon Blanc blend takes the place of an entry-level varietal. The current (2009) vintage won gold at the fall BC Wine Awards, and at the time of release the 2007 received some high praise as well from reviewers such as Anthony Gismondi, John Schreiner, and Daenna Van Mulligen. Opening the bottle it becomes obvious that this is an oaked Chardonnay that is not ashamed to admit it. While at first the oak notes were a little too dominant, they became more subdued with breathing time in the glass, and the orchard fruit notes – apple in particular – emerged for us to enjoy. I’ve got a bottle of the 2008 vintage, which won gold at the 2010 Canadian Wine Awards, but may not ever see the 2009 vintage as only 115 cases were produced. I’m keeping my fingers crossed that our local VQA stores manage to acquire a little bit!

8th Generation 2010 “Integrity” Frizzante: We enjoyed this wine on Christmas day as we brunched on sourdough French Toast and opened gifts through the afternoon. The successor to 8th Generation’s first Frizzante from 2009 added Pinot Gris and Sauvignon Blanc to Chardonnay. I have to admit that I was a little disappointed when I first tried it last spring, as it didn’t seem to show the mouth-watering purity of flavour that the first Frizzante Chardonnay did. However, after several months aging I think the blend has settled into much greater harmony, and the sharp edges following bottling have smoothed out. The delicate fruit flavours have emerged, and the creamy palate and fine bubbles make it very food friendly. Considering the winery is not yet sold out (as they are with the Pinot Noir-based Frizzante Rose “Confidence”), now may be the best time to buy some – I know I’m motivated to search for what remains in stores around town.

Tinhorn Creek 2009 2Bench White: Our Christmas dinner white wine, suggested by Icon Wines to pair with a vegetarian Christmas. Although I have a bottle of the 2010 vintage they initially recommended, I felt it was a good time to open the 2009 I had been saving. Winemaker Sandra Oldfield produces her white blend to be relatively ageable, so there’s no need to drink the current vintage immediately out of concern the fruit will fade over time. It seems obvious that Sandra makes the 2Bench White as an ideal food-pairing for West Coast dishes, as it’s said to partner well with creamy dishes, seafood, and sushi; with other reviewers recommending Asian cuisine and Indian food, all quite prevalent here in Vancouver! I always love the approachability and balance of this wine, regardless of vintage – it’s one of those few “go-to” wines I can always depend on for many situations. The 2009 still has plenty of life left in it, while perhaps harder to find in stores than the equally tasty 2010, which still appears on shelves.

Orofino 2010 Gamay: I picked out this small lot (only 75 cases) Gamay several weeks in advance as our Christmas dinner red. It was an easy choice given the high-quality approach I know Orofino takes in their winemaking, and the bottle notes even suggested “roast turkey with savoury side dishes”! We were planning on Tofurkey, but I was fairly confident the wine wouldn’t discriminate too severely, and we weren’t disappointed: unlike the (great bargain) Mt. Boucherie Gamay Noir with which I made a most delicious maple cranberry sauce, Orofino’s take was much drier. It was an ideal pairing for the type of meal one enjoys on Christmas, with bright fresh flavours to balance the food, and some fun little touches like the cream-soda aromas rightfully mentioned on the label. Although a painfully small amount was produced, it might still be found in some private stores such as Firefly, where I got my bottle; turkey dinner not required for enjoyment!

Mission Hill 2007 Perpetua: This Chardonnay comes from Mission Hill’s highest tier of wines and with the $40 price to match. For the price you get a wine considered by many to be one of the province’s best and most representative Chardonnays – which is Mission Hill’s goal no doubt. I get at least one bottle each year to cellar for a special occasion, and on Boxing Day we hosted an old friend of mine for some baked brie, and creamy cauliflower-mushroom pot pie – as special an occasion as any. I recall the 2006 being more to my liking, similar to the verdict of Liam Carrier at Icon Wines, but I think a little oxidation may have complicated the situation. The closed nose and unusually deep colour suggested some sort of imperfection, but it did clear up with time and became cleaner and fruitier, with strong hints of the complexity that Anthony Gismondi described in 2009. Fortunately I have two bottles of the 2008 vintage so I should stand a much better chance of ensuring an unbiased sample when I open them over the next year.

CedarCreek 2008 Platinum Pinot Noir: My friend brought this acclaimed bottle alongside an Osoyoos Larose 2007 Grand Vin; although I had to disappoint him in suggesting we cellar the Grand Vin a little while longer, the CedarCreek quickly soothed us all. CedarCreek received a well-deserved gold medal for this wine at the InterVin International Wine Awards, along with silver at the 2010 Canadian Wine Awards, but only just released the wine recently after selling off the 2007 vintage (itself no slouch in the quality department). The winery released it at just the right time however, as I tend to agree with Daenna Van Mulligen that it is an outstanding wine. We really enjoyed the smooth texture and clean juicy berry flavours, and I was particularly pleased knowing that another bottle would likely soon be on its way to me in the February shipment of the CedarCreek Platinum Club.

Hi Russell,
Glad you liked the 08 CC. I thought it was one of Tom's premier vintages.