After spending much of the past few weeks travelling for the holidays and various work-related tasks, the members of our wine club were eager to get back together this month to catch up and share more great food and drink. It’s amusing to see how the club has progressed over the past year, with few of us willing to settle for bringing just one bottle anymore; two bottles per couple has now become almost the norm (not to mention a “dinner” that seems to last for many hours!). As we are all gaining more familiarity with the myriad excellent wineries in BC it’s hard to settle on just one wine to pair with the unique and exciting dish one is contributing to the meal; this month proved to be no exception to our newly developed pattern. 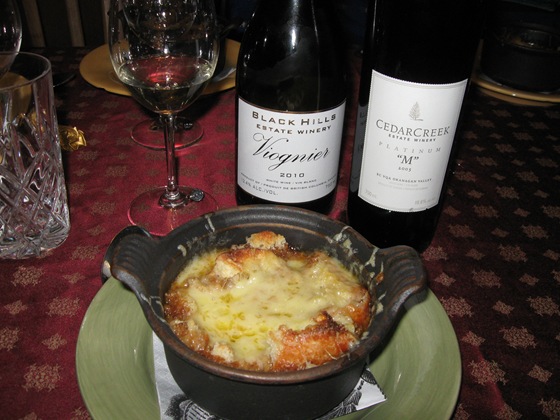 After enjoying a very appetizing and creamy sparkling wine from See Ya Later Ranch before dinner we tucked into the first course with gusto upon seeing individual cast-iron ramekins coming out of the kitchen. Those appealing dishes turned out to contain the most amazing vegetarian French onion soup, and we relished hearing about the chef’s success in retaining the soup’s traditional richness while also accommodating our varied dietary preferences. In place of the typical beef stock he had substituted vegetable stock, and found the secret ingredient to be soy sauce, which guaranteed the rich, meaty umami flavour that such a dish requires. In our glasses we found two completely different wines that each complemented the soup in different ways. Black Hills’ 2010 Viognier (only their second vintage) expressed floral and citrus aromas along with tart acidity and a long finish that emphasized the sweetness found in the heavily caramelized onions. Pairing such a fresh wine with a heavy dish such as this may not be immediately apparent, but the experience showed that – gastronomically – opposites can attract quite well indeed.

The citrus and spice in the Viognier provided a lovely lead-in to a wine that I practically jumped out of my seat to enjoy: CedarCreek’s 2005 Platinum ‘M’. This very rare fortified wine is the only Madeira-style produced in the Okanagan, and required five years of cask aging before only 100 cases were bottled in 2010. CedarCreek has a fairly long history of Madeira-style wines, having produced a non-vintage version described as “very close in style to the real thing” since the early 1990’s. I’ve personally been hoping to thoroughly taste this exciting wine since hearing about it when the 2004 vintage appeared on the market. It’s not an inexpensive proposition – selling for $65 at the winery – but for that price you do get a full-size bottle (750ml) at nearly 20% alcohol! The fortification is immediately apparent upon smelling it, but with more consideration caramel and cherry notes emerge, which reminded some of us of Amaretto liqueur. Although recommended as an after-dinner wine the ‘M’ paired marvellously with the soup, as it brought out the richness of the broth and baked cheese, leaving you with a warm, content feeling – no doubt helped along by the alcohol and 72g/L of residual sugar! Although the 2005 ‘M’ is now sold out on CedarCreek’s website, I have high hopes that they will continue to produce it on an annual basis, to enjoy at any time with or without food. 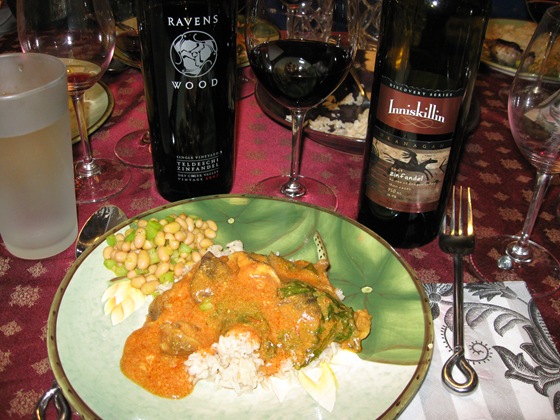 As we continued to slowly sip at our Madeira, we were invited to guess at the contents of two unmarked paper bags containing our entree wines. We were only told that both wines were the same (red) varietal, and one was from BC: our host has enjoyed challenging us in the past with BC vs. International pairings such as this, if you’ll recall our Barbera blind tasting last spring. With plates full of brightly coloured mushroom and rapini curry alongside navy bean and celery salad, courtesy of Vij’s cookbooks, we sniffed and sipped with discerning senses. The first wine smelled fresh and floral, with dark fruit and hints of balsamic carrying through to the palate. Notes of wet greenery and mushrooms were suggested as we took note of the youthful tannins. Wine number two was quite different, incorporating a sweeter palate along with aromas of chocolate, blueberry, and “cinnamon raisin bread”. It was richer in flavour due in large part to the chocolate notes, and slightly tighter and more tannic than the first wine; suggestion was made that this wine could stand more time in the cellar.

Without further ado the wines were unmasked to reveal Zinfandels from BC’s own Inniskillin as well as California’s Ravens Wood Winery. I had actually just tasted the Inniskillin days before at Village VQA Wines Kitsilano, so was pleased to see it again as part of our meal, in an unexpectedly successful pairing with curry. The big character and spicy notes of Zinfandel make it a natural pairing, but there being so little found in BC (Road 13 used to produce a varietal version, and Desert Hills still does) we were all surprised and impressed. It turns out the fresh and floral first wine was the Inniskillin version, from the 2009 vintage, and the second wine – a candidate for further aging – came from California’s 2007 vintage. Given the differences between the two wines it was hard to pick a favourite, although many of us leaned towards the richer Ravens Wood version. In any case, it was another illuminating investigation into how BC can put a unique spin on the signature grape varieties of other regions from around the world. 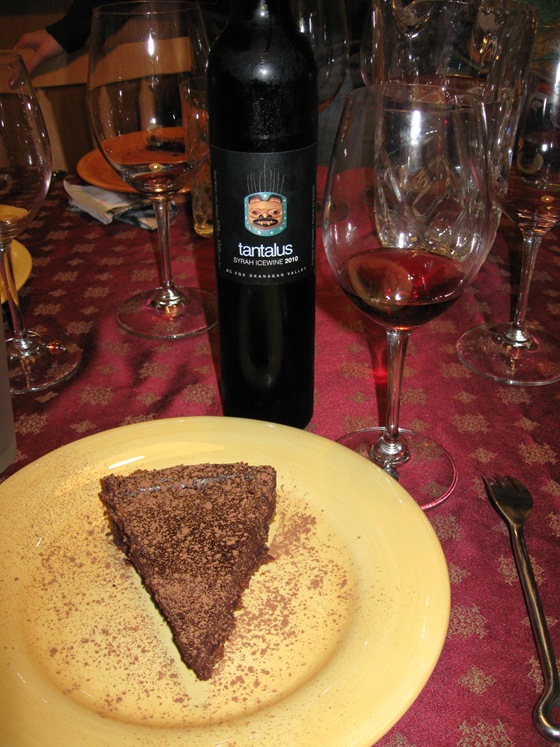 I have to admit I was looking forward to the dessert course in particular – it being my own contribution to the meal – and I could see that my wine selection would continue with the rarities theme we were developing. Unlike in many other cases, for this dish I had the food selected long before the wine: having not had the chance to enjoy Dark Chocolate Tart with Gingersnap Crust over the holidays I was very happy to finally get to share this mouth-watering recipe. Finding a wine pairing for this recipe was quite the challenge, as chocolate often demands red, while ginger flavours pair best with aromatic whites. I also wanted to contribute something entirely unique, so I soon settled on icewine – a style which had not yet been served as part of our wine club. Although some of the highly regarded Riesling icewines from Mission Hill and Nk’Mip were originally on my radar I was excited to discover that Tantalus produces a rare Syrah icewine. A quick call to the winery put me in touch with Swirl Yaletown where one of the last bottles in Vancouver could be found!

The rich dark chocolate tart dusted with cocoa was naturally spectacular – hard to go wrong with a recipe like that – but the icewine was the star of the course. A touch of white cranberry balsamic on the nose revealed an extremely well balanced nectar with bright fruit and crisp acidity, rich in flavours of grape and crab apple jelly. In fact, we were all a little dismayed at how much we liked it: I think we secretly hoped it wouldn’t be so impressive, and then none of us would be tempted to buy more icewine in the future! Unfortunately now that we have a taste for excellence we’ll have to be extra judicious with our budgets as we begin to taste our way through the heretofore unexplored realm of these pricey Canadian gems. Although the challenge to surprise and stump each other continues to increase in difficulty, I’m looking forward to more treats such as these as we begin another year!

Looks very delicious. :) As a food lover I would like to taste this yummy food in my upcoming family part event. Thanks.

French onion soup and CedarCreek "'M" Hmmmmm très bon! We have a few bottles of the 2005 vintage left at the wine shop and yes we will keep on the tradition of making "M". We have released the 2007 Vintage now. Available on our website www.cedarcreek.bc.ca