The BC Wine Appreciation Society hosted another sold-out event last month when Luke Smith, the owner of Howling Bluff Estate Winery joined us to lead two vertical tastings of his red wines. Luke is an outspoken advocate for the potential of the Naramata Bench to produce world-class wines, if only winery owners and winemakers would focus on the strengths he feels are being neglected throughout the Okanagan Valley: focused, targeted plantings of limited grape varieties that are climate appropriate. Howling Bluff has garnered an enviable series of major awards since their first vintage in 2006, and Luke is certain that by focusing on one varietal in particular – Pinot Noir – he can achieve continued critical success on a national and international stage. 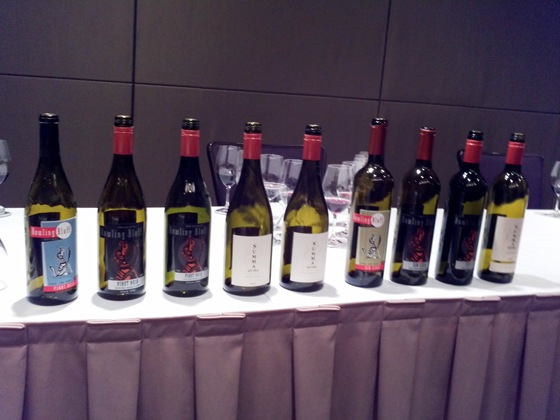 While introducing himself and his winery Luke suggested that late ripening red varieties such as Cabernet Sauvignon (and the Bordeaux-style blends they rely upon) will never be truly suited to much of the Okanagan climate. When Howling Bluff’s vineyards were first being planned, Luke – then a big Bordeaux collector – followed the trend by planting the typical Bordeaux varietals, but it was his Pinot Noir that soon impressed him and critics alike: his first three vintages (respectively) won the Lt. Governor’s Award, the Okanagan Wine Festival People’s Choice Award, and the Canadian Wine Awards Red Wine of the Year (the first Pinot Noir to ever win). While demand for his Pinot soared, his Bordeaux blend Sin Cera – a very decent wine in itself – simply couldn’t follow suit, leading to substantial soul-searching and an eventual about-face for the winery. Despite widespread consumer expectations of “big reds” (leading to what may be inappropriate plantings of Cabernet and the like – that sell nonetheless), Luke told the assembled guests that he is currently ripping out or grafting all his other red vines over to Pinot Noir. He will retain his Semillon and Sauvignon Blanc plantings, however.

Knowing that the 2011 Sin Cera – currently in barrel – will be the last red blend from Howling Bluff, ensured that attendees at the tasting appreciated the four-year vertical that Luke had brought with him. Alongside the 2006-2009 Sin Cera was the star of Howling Bluff, the Summa Quies Vineyard Pinot Noir, of which we had five vintages from 2006-2010 before us. After his passionate and convincing introduction Luke got around to discussing the wines we were to taste, starting with their origin in his small estate vineyard on Three Mile Road just above Okanagan Lake. The vineyard slopes down towards the lake, ensuring that air continues moving across the grape vines, but making it treacherous to farm at times when the tractor tips precariously!

Fortunately physical safety is paramount at Howling Bluff, but financial concerns have shown Luke why Pinot Noir is called the “heartbreak grape”: he pointed out that because Pinot Noir over-crops “like crazy” the labour costs to properly crop the vines can be prohibitive! Yields of several tons per acre can be common, but won’t produce concentrated, high-quality wine, so most of the fruit has to be cut down early in the season. Watching potential income rotting away on the ground can be a very hard thing to do when you are a new winery owner trying to make a living! Fortunately Luke’s hard choices have paid off over time as his wine has gathered a strong following. 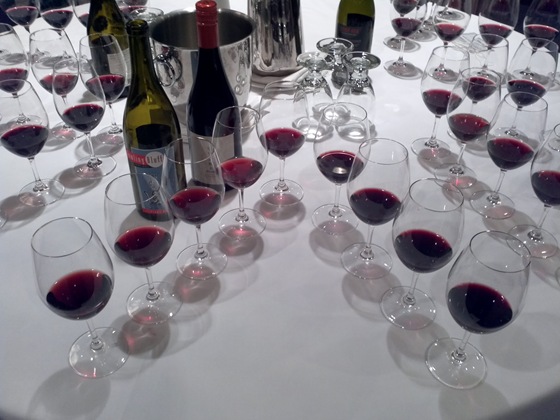 We were fortunate that he was able to share some of the few remaining bottles of his initial vintages with us at the tasting. Howling Bluff’s first vintage in 2006 yielded only 120 cases of Pinot Noir, all produced from brand new oak as the winery had no used barrels yet! Winning a Lt. Governor’s Award – the most prestigious prize in BC wines – was a huge coup, and few wineries have replicated such a feat in their first year (Painted Rock having done so twice for the 2007 vintage!). After five years aging the wine was very smooth, with sufficient acidity to suggest it could continue to age in bottle. The 2006 Sin Cera was equally smooth, and we were surprised to hear that it was in fact 100% Merlot rather than the blend most had assumed. A few guests bemoaned the upcoming demise of the Merlot vines at Howling Bluff if this delicious wine demonstrates what they can yield, however Luke was unfazed in his plans!

The following year was “monstrously hot” as Luke put it, resulting in the first major – and painful – crop thinning required on the Pinot Noir. The 2007 – a People’s Choice Award Winner – was a favourite at our table, with the smooth texture of the 2006 replicated but just a touch less acidity to ensure excellent balance. As more of the Bordeaux varieties came online in 2007 the Sin Cera became the blend Luke had imagined; we noticed it taking on more tannin and acid but it was still smooth and quite well liked by many in the room.

The 2008 wines were sources of much drama, in particular because of the amazing results from the Pinot Noir at the 2010 Canadian Wine Awards. Looking back Luke recollected that upon tasting random samples from the bottling line he was devastated at what he thought was a very unimpressive wine! Fortunately many wines can turn around in bottle, as Wine Access declared it to be “a joy in the glass…that wowed and beguiled the judges” in declaring it the first Pinot Noir to win the CWA Red Wine of the Year. I found it to have a smoky nose and pure clean fruit flavours, with higher acidity than 2007 (comparisons coming naturally as we progressed through the vintages). With 2008 being a cooler vintage, the 2008 Sin Cera demonstrated significant tannin, even after the time it has spent in bottle. Luke had no qualms calling this wine a “tannin bomb” that needs many more years in the cellar, and/or a big steak to accompany it.

Fortunately nature cooperated in the summer of 2009, but not before an intense freeze that winter killed and stunted reams of vines throughout the region, leaving Howling Bluff with only one quarter the crop size expected by harvest. The Sin Cera ended up a very different wine after the warm summer, significantly smoother and approachable, despite having been just released recently. The Pinot Noir vines – damaged as they were – continued to produce award-winning fruit, as Luke took home his second Lt. Governor’s Award for the 2009 vintage. So little wine remained on the market by the time he received the award he had to buy it back from local stores to build up his own cellar! In the glasses on our table the Pinot Noir was noticeably lighter in colour than other vintages (including the 2010 that followed it), yet very fruit forward on the nose with elegant qualities that many guests appreciated.

For 2009 Howling Bluff also went through a major label change, switching the “critter” labels featuring a stylized howling dog for clean and concise text on cream-coloured paper that is much more restaurant-friendly. Apparently industry buyers had provided feedback that customers were shying away from the bottle out of concern it might be a low-end wine judging by its “kooky” label! The new labels also feature vineyard designations to reflect the Estate Summa Quies vineyard as alternative Pinot Noirs from surrounding vineyards begin appearing in Howling Bluff’s portfolio.

By 2010 the grafting program was in full swing at Howling Bluff, and an additional 20% more new Pinot Noir vines were yielding fruit measuring up to Luke’s high standards. We were treated to an advance tasting of the 2010 Summa Quies Pinot Noir and were quite pleased at its approachability given its youth. Fruity and quite juicy on the nose, it is smoother than one would expect, and Luke delighted in pointing out how drinkable he and his family and friends have found it to be over the past few months. Fortunately despite the Smith family’s efforts about 300 cases are still available and should soon be for sale via the winery and select private and VQA wine stores.

As the tasting wound down Luke informed us that he is aiming for 2000 cases each year for the whole winery, including his white Semillon/Sauvignon blend and two or more Pinot Noirs, based on the five different clones he has planted and planned. If fans are lucky we may even see a little bit of Port-style wine as well! And finally, as more Pinot Noir vines mature he is also pondering a Reserve Pinot Noir above and beyond the regular Estate wine – an entirely free run wine from select vineyard blocks aged in 100% new oak: the Lieutenant Governor should be prepared!