It’s not often that we get to enjoy two wineries at a BC Wine Appreciation Society tasting, but at this month’s sold out event we were lucky enough to sample the French-focused, and Italian-inspired wines of Le Vieux Pin and LaStella, respectively. The trick to getting access to both of these southern Okanagan wineries is that they are both owned by the same parent company, Enotecca, although each winery has independent vineyards and winery operations in Osoyoos (LaStella) and Oliver (Le Vieux Pin). The wineries maximize their efficiencies however, and share staff, including General Manager Rasoul Salehi, who guided us through a tasting of five wines from Le Vieux Pin, and four from LaStella.

Rasoul began the evening by introducing the wineries and their philosophy, which is to produce artisanal, terroir-focused wines that express the purity of the grapes and vineyards in which they grow. Enotecca is not focused as much on making “delicious” wines as they are on making honest wines, which is why the wineries never use any correction techniques to make their wines more consumer-friendly. The other major guiding principle of these wineries is sustainability, which Rasoul insists is (relatively) easy in the Southern Okanagan: “anyone who doesn’t farm sustainably is lazy” in his opinion. All of the vineyards are currently organically farmed, and it is believed they have been since inception (before Enotecca owned them). Techniques such as natural pest control (e.g., falconry) and on-site composting go hand in hand with the deficit irrigation and “low-input viticulture” practiced by Le Vieux Pin and LaStella. The result has been spectacularly expressive, small-lot wines that are praised the world over (in large part thanks to Rasoul’s hectic travel schedule). 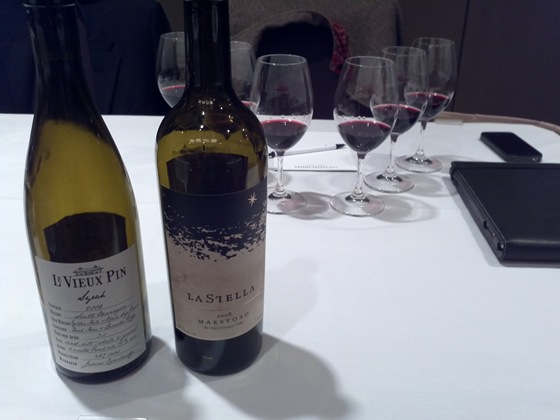 We started out tasting two of Le Vieux Pin’s Viognier blends, fruits of the winery’s recent focus on Rhone varieties. The 2009 Viognier-Roussanne came out last year to very high acclaim, and the 360 cases produced sold out in relatively short order. Fortunately the winery held back a a few, and we got to enjoy the unique honeyed flavours produced by aging some of the Viognier in a single Acacia wood barrel. With about 13% Roussanne to complement the majority Viognier the wine yields an impressive nose rich in perfumed tropical, floral, and mineral notes, followed by an very slightly oily mouthfeel showing delicious citrus and peach flavours. If the 2009 was excellent, the 2010 version was truly sublime, and we were very lucky to receive an advance tasting of this Spring release. For the 2010 vintage winemaker Severine Pinte added Marsanne (9%) while decreasing the Roussanne component to only 1.5%: the resulting blend has is an even more complex wine that smells a bit sweeter, with slightly more citrus on the palate (courtesy of the cooler 2010 vintage). Many guests were saddened to hear that only 253 cases were produced of this beautiful, refreshing wine – now named “Ava” after Severine’s daughter – to be released next month; I know I’ll be ordering some before it’s all gone!

Following up the mouth-watering whites we moved on to Le Vieux Pin’s inaugural Syrahs, from the 2008 vintage – also sold out, as the 2009 release is imminent. Trying the “regular” 2008 Syrah against the exclusive Equinoxe Syrah was a very valuable opportunity, given that only 70 cases of the single-vineyard Equinoxe were produced. Each wine includes a small amount of Viognier which not only lifts the aromatics but also darkens the colour as well. While both wines show peppery, leathery, toasty aromas the Equinoxe version makes you work harder to reveal its intricacies, such a liquorice and lavender. Le Vieux Pin makes their Equinoxe wines in a more Old World style – they are intended to be more than simply Reserve wines, and to express a unique flavour profile in their own right.

A final treat from Le Vieux Pin was another advance tasting, this time to provide a chance for us to enjoy the upcoming 2009 Syrah. Once again we were greeted by a savoury nose and dark fruit flavours, along with subtle floral elements due to the co-fermented Viognier grapes – a year younger (and fresher) in this case. Seeing how much my wife (and I) enjoyed this bright and youthful wine I was very pleased to hear that nearly 1000 cases have been readied for release next month; although once the inevitable glowing reviews come out they likely won’t last too long! As an aside, Rasoul was clearly proud to report that the 2009 Syrah is currently selling for €35 Euros per glass as the exclusive pairing for the signature dish (a coffee-encrusted beef entree) of a three Michelin Star restaurant in Germany, a very impressive feat for a small Canadian winery! 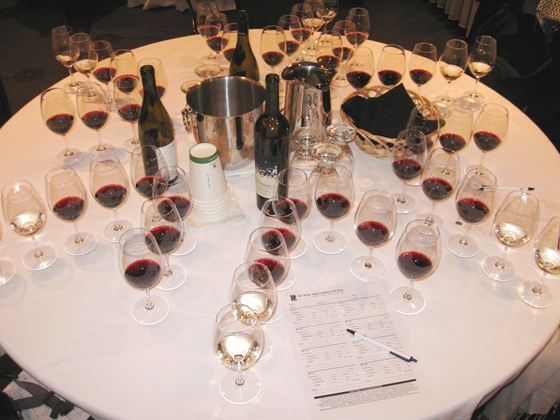 Three red wines from LaStella awaited us as we finished the Le Vieux Pin Syrahs, and Rasoul was happy to explain how LaStella approaches winemaking slightly differently from Le Vieux Pin. The Italian-inspired approach is evident in the first wine we tried, a Sangiovese-inclusive red blend the winery calls Fortissimo. The 2009 Fortissimo (to be released later this year) is dominated by Merlot and Cabernet Sauvignon, with smaller percentages of Cabernet Franc and Sangiovese Grosso. This wine follows the Super Tuscan formula, described by Rasoul as one that uses a less intense ferment, complemented by longer pre- and post-fermentation stages. This technique was pioneered because fans of French grape varieties were tired of waiting decades to open their tannin-heavy wines. The outcome is more approachable wines that don’t need to spend so long in the cellar, although it can’t hurt (Rasoul suggested that the Fortissimo may be the longest lived wine in LaStella’s portfolio, with the potential to improve for the next decade). As a brand new release the 2009 Fortissimo still showed plenty of tannin, but also included minty, green pepper characteristics that I myself found refreshing and clean (although others tend to shy away from such a flavour profile).

The final two reds were LaStella’s small-lot, big flavour Merlots: Allegretto and Maestoso, both from the 2008 vintage. Allegretto is the “regular” wine to Maestoso’s flagship status as LaStella’s crown jewel, but by itself has something very unique to offer: this is one of the small number of wines in the world that are grown on their own rootstock – that is, the vines have not been grafted onto Phylloxera-resistant roots from a resistant species. LaStella suggests that as a result “there is a trueness and transparency in the flavour that has not been seen elsewhere.” I myself can report cool and smoky eucalyptus and blackberry aromas, followed by a complex but youthful palate that will no doubt smooth out with time (I recently enjoyed a 2006 Allegretto that I absolutely adored). Maestoso, at $90 a bottle, is no doubt one of the priciest wines served at BCWAS tasting, and represented a great opportunity to sample a hard-to-come by wine (only 150 cases were made). It is a wine that John Schreiner describes as “big, hedonistic, dramatic, and hugely rich;” quite a lot to live up to! I noticed plenty of smoky characteristics that actually reminded me a bit of popcorn, as well as coffee and savoury meats. Rasoul describes Maestoso as “an iron-fist in a velvet glove” in that it is powerful yet delicate and nuanced: it will likely hold in one’s cellar for a long time but no one at the winery is quite sure how long – earlier vintages have remained unchanged in the bottle for years!

As guests finished up their Merlot we were treated to a extra special bonus of sold out LaStella 2010 Moscato D’Osoyoos, the winery’s tribute to Piedmont’s Moscato d’Asti. This effervescent aromatic wine is a wonderful accompaniment for many foods and occasions, and exhibited beautiful fruit salad aromas and flavours. Although the expected effervescence was not as full as expected – due to carbonation equipment problems during bottling – the tropical and tree fruit characteristics and bright acidity are guaranteed to provide refreshment from brunch to dessert. The 2011 Moscato should be equally tasty, and even better if the proper carbonation can be assured, but given that only 366 cases were produced in 2010 fans shouldn’t expect the new vintage of this unique wine to last very long!

Altogether it was a very illuminating tasting showing the complex flavours that are possible when merging Old and New World approaches to wine on one dimension, and French and Italian inspiration on another. Thanks to Rasoul Salehi and the owners of Le Vieux Pin and LaStella for sharing their passion, their inspiration, and their wonderful wines – past, present, and future – with the members of the BC Wine Appreciation Society!