I received my third Platinum Club shipment from CedarCreek this month – I have now come full circle with an entire year’s worth of club shipments, and am quite happy to continue as a member! The February shipment is advertised as being Platinum exclusive, in that it features solely the Platinum (Reserve) series of red wines (the Chardonnay having arrived in the Fall). The six bottles I received included prominent medal-winners, pre-releases, a pair of “siblings” and an exclusive once-in-a-lifetime bottle. 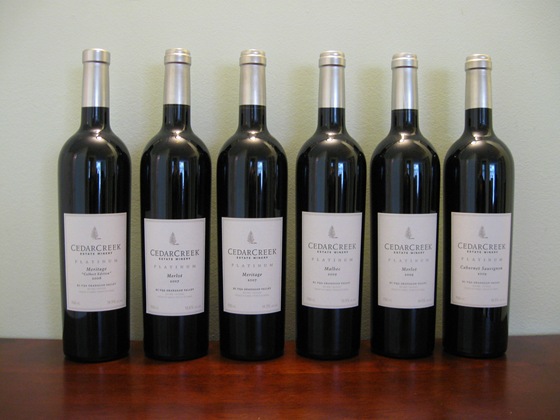 First off the siblings, seen in the form of the 2007 and 2009 Platinum Merlots: the 2007 is the currently available vintage, while the 2009 version is not scheduled for wider release until July. What is perhaps immediately apparent in looking at these two wines is the lack of a 2008 vintage! CedarCreek boldly – and bravely – decided to forgo Platinum bottlings of their red Bordeaux wines from 2008 (the Merlot, Cabernet Sauvignon, and Meritage). The cool growing season simply did not produce grapes that the winery felt were quite up to the standard deserving of the Platinum name, which means the Estate series wines that received said fruit significantly over-deliver at their price point.

Following in the footsteps of the Lt. Governor’s Medal received for the 2006 Platinum Merlot, the 2007 scooped up a Gold medal at the 2010 Canadian Wine Awards, as well as an ebullient review from Anthony Gismondi, who suggested it is “a good example of why BC can make better Merlot than most other regions in the world.” CedarCreek suggests the 2007 will age better than the ripe 2009, which is almost Californian in its immediate attractiveness. No surprise that the 2009 is hence higher in alcohol (14.9% vs. 14.6%) and in sugar (more than double the 1.5g/L found in the 2007). The 2009 vintage may sell out fairly quickly upon release, given its approachability and the fact that only 507 cases were produced versus 878 cases in 2007.

Also included in the shipment were two Platinum Meritage blends, one from the 2007 vintage, and the other the exclusive “Colbert Edition” limited release. The 2007 Platinum Meritage received Silver at last year’s Canadian Wine Awards, prior to which Gismondi suggested it “needs a few years” in the cellar (although John Schreiner was quite pleased with the “remarkable polish and elegance” he enjoyed in early 2011). I have two bottles in the cellar so perhaps we’ll see how it’s aging when I open the first one in Winter 2013/2014. The wine is a blend of 44% Merlot, 30% Cabernet Sauvignon, 18% Malbec, 5% Cabernet Franc, and 3% Petit Verdot. As for the “Colbert Edition” Meritage, it comes from a small lot of less than 150 cases of a special blend aged for 21 months in four barrels made from a single 350-year-old French oak tree! CedarCreek got the only barrels to make it to North America – from only 40 produced out of that solitary tree – and likely thought long and hard about what to put in them! The final blend includes nearly twice as much Cabernet Franc as the 2007 Meritage, with Merlot seeing a reduction as a result. My friends and I enjoyed an advance “Colbert” bottle last Fall on my birthday, at which point we decided there needn’t be any rush to open another bottle – an opinion shared by the Canadian Wine Awards judges, who awarded the wine Silver in 2011.

The final two bottles in the case were new releases from the 2009 vintage, including the Platinum Cabernet Sauvignon (which also skipped 2008), and the third release of Platinum Malbec. I now have three vintages in a row of CedarCreek Platinum Malbec, and continue to cherish each of these rare bottles (only 153 cases were produced for 2009). I tasted the 2008 at the February 2011 BCWAS CedarCreek tasting and revelled in the never-ending mint chocolate aromas; that wine received a Gold medal at the 2010 Canadian Wine Awards. Given the warm weather in the 2009 vintage the new release is hoped to exhibit plenty of ripe dark fruit on top of the chocolate notes. Both the Malbec and Cabernet Sauvignon were aged for 20 months in (60% new) French oak, but the winery feels confident that juice from such a hot year will have no trouble embracing all that new oak. Even better the Cabernet Sauvignon includes a special early-ripening clone from Napa (which is now impossible to acquire), so hopefully the dreaded green characters that can sneak into cool-climate Cab will be minimized in this vintage.

The next Platinum Club Shipment should come in June, bearing the aromatic whites from the anxiety-inducing but ultimately successful 2011 harvest. The Spring shipment will hopefully include floral Gewurztraminer, racy Riesling, and the heavenly “fruit salad in a glass” Ehrenfelser, as well as crisp Pinot Gris, and the charming new (Pinot Noir) Rosé that first appeared last year. The juicy Platinum reds should keep us warm for the remainder of Winter, but Summer is slowly approaching and I for one couldn’t be happier!

Thank you Russell for this post on our latest Platinum Club Shipment. We were excited about this one and are so glad you like it!