As is becoming more common with our wine club, we once again stumbled onto an inadvertent theme: soon after getting together this month the six of us discovered we had all brought Pinot Noir, seven bottles in total from the three couples in attendance! Given that we have been dining together on a monthly basis via this club for nearly a year and a half, it’s amusing that although we have never brought duplicates, we have often brought complimentary bottles – sometimes from the same winery. In this case we once again avoided duplicating each other, and it would appear that spending as much time together as we all do gave us a simultaneous hankering for good Pinot Noir. 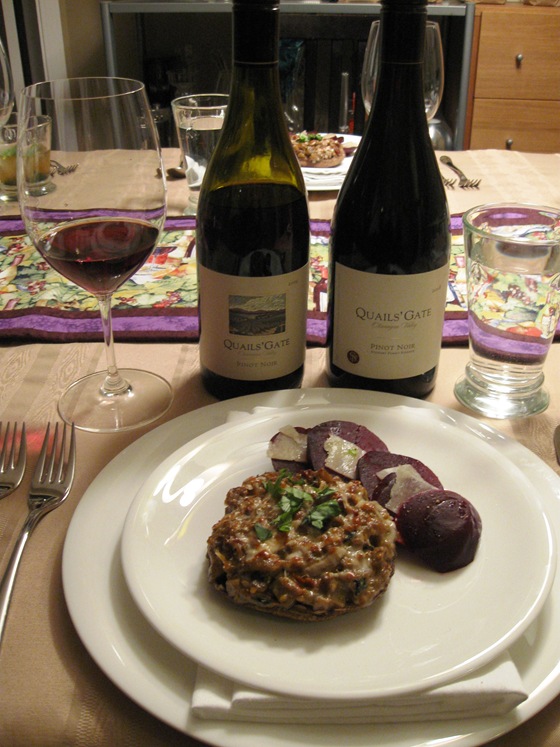 In my case, as appetizer chef I came about Pinot Noir organically, as I started with the food I wanted to make and thought about the wine later. I’ve been wanting to make stuffed mushrooms for ages, and they seemed like the perfect appetizer dish, and then I realized – why stuff a button mushroom when you can stuff a Portobello? Searching for an especially rich take on the dish I was pleased to come across Portobello Mushrooms Stuffed with Eggplant and Gorgonzola; add on a side of roasted beets with Parmigiano shavings and I was ready to choose the wine selection. When considering what bottle of BC’s finest to contribute to our monthly celebration I try to be fair and balanced, so that we can enjoy a wide variety of wineries. Having not yet contributed anything from Kelowna’s well known Quails’ Gate Winery it seemed like a natural choice given their Burgundian focus. With mushrooms, eggplant, and beets on the plate Pinot Noir was squarely in my sights, and Quails’ Gate describes the heartbreak grape as their “flagship product”.

Quails’ Gate produces an Estate-tier Pinot Noir for $25 and their more exclusive Stewart Family Reserve version for $45. I decided to try both! With the extra bottle aging received by the Reserve wine, it proved impossible to match vintages so I settled on the 2008 Reserve and the 2009 Estate. Trying the two wines side by side with the same food was very enjoyable, and we quickly found that the fresh, bright fruit found in the 2009 was ideal with the beets, while the slightly darker, earthier 2008 Reserve fared best with the mushroom and pungent gorgonzola. Both wines also expressed mineral notes and smoky aromas but the 2008 showed more of each, along with a smoother palate minus much of the acidity of the 2009. Both wines were clearly well made from excellent fruit, and each displayed unique strengths; I look forward to trying further examples of the Reserve in the future (I have 2007 and 2008 aging in the cellar, and the 2009 was just released). 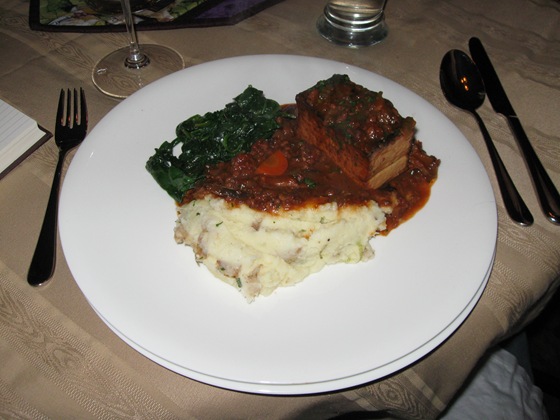 Our host had himself a good chuckle when I pulled out two Pinot Noirs after arriving, as he had four more awaiting us, in paper bags for a blind tasting. To accompany this flight he had taken it upon himself to create “Tofu à la Bourguignonne” out of respect for the vegetarian half of the room (and the adventurous omnivorous other half). Served alongside Pomme Aligot (i.e., mashed potatoes with cheese) and steamed spinach, it was a mouth-watering sight to behold, and did not disappoint on the palate either. The rich, earthy dish was ideal for a generous wine accompaniment, yet we restrained ourselves and only opened three of the four bottles – what admirable self-control!

The first wine was pleasantly warm and earthy; with soft but noticeable tannin and a reasonably tart finish it contained a lot of dark, concentrated berry flavours. The second bottle was a lighter, fruitier iteration with generous cherry flavours and just a touch of caramel on the finish. Our third wine was the sweetest (but not in a bad way) as well as the darkest in colour, with leather and fresh blueberry aromas that led to well balanced blackberry and currant flavours. After trying all three I was confident the first one was my favourite, and also the best one on its own, although many others were fans of the third wine as well. The reveal – in consecutive order – showed us Le Vieux Pin 2008 ‘Adieu’ Pinot Noir, Nicolas Potel 2009 Chorey-les-Beaune, and Averill Creek 2007 Pinot Noir from Vancouver Island’s Cowichan Valley. With so many wines available to sample (including the two unfinished Quails’ Gate bottles) we continued sipping them after dinner, and found all seemed to be improving as they had time to breathe. Unfortunately for anyone desiring an overall “winner” it’s too close to call between the two BC wines. However, Le Vieux Pin has ceased production of Pinot Noir in favour of Rhone varieties, so perhaps Averill Creek has the final word as they continue fine-tuning their already considerable expertise. 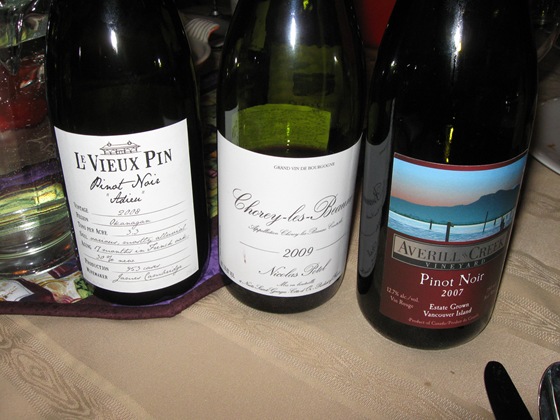 As we tried our best to finish off five bottles of wine, the dessert team sprung into action and prepared their mysterious dish: all we knew is that it required an open flame! We were soon very pleasantly surprised to see chocolate fondue with fresh fruit and homemade mini-cheesecake wedges. To accompany this colourful feast was Summerhill Cipes Rosé, a Pinot Noir-based dry sparkler made from organic grapes. Even better, a portion of the profits from sales of this wine help support Robert Bateman’s Get to Know Your Wild Neighbours program that helps to connect children with nature. The wine itself showed off smooth delicate mousse and juicy raspberry flavours, with low acidity and a light enough body to easily cut through the rich chocolate-coated cheesecake. As an aside, I discovered later that the same couple contributed cheese fondue as the appetizer course exactly a year ago – not that I’m complaining, when one has a fondue set one finds an excuse to use it, and we’re happy to benefit! 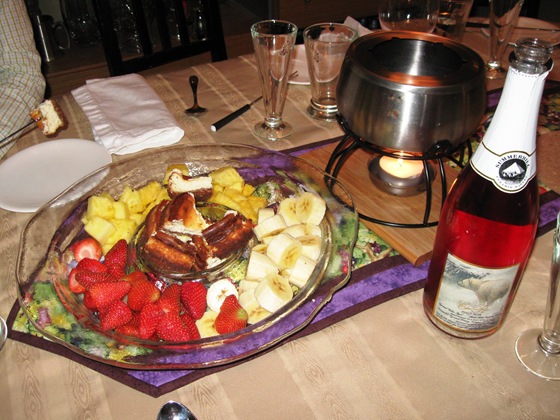 Having enjoyed another delicious meal and many exciting wines I’m already looking forward to next month, when my wife and I get to host.  I’ve already picked out two fantastic wines (with hopes for a third if I can find it anywhere), and now have to decide which version of the entree on which to settle – the easier one that can be prepared further in advance, or the challenging one that could yield a more attractive plate. Stay tuned for more delicious BC wine!