I spent the latter half of last week at the Vancouver Playhouse International Wine Festival, sampling wines from right here at home and around the world, and enjoying the camaraderie of so many people excited about all things vinicultural. All the interesting, unique, and delicious wine was wonderful of course, but it was even better reconnecting with all the great people, and meeting others for the first time – some of whom I had only communicated with online previously. I finally got to the chance to meet IRL (In Real Life) “tweeps” like Festival Director Harry Hertscheg, Quench Wines Representative Rayna Corner, Hester Creek Communications Manager Sarah Lefebvre, fellow blogger Lucas Achtem, and Black Cloud Proprietor and Township 7 Winemaker Bradley Cooper. In between the new people I met and the others who are already becoming old friends, I realized how many people in and around the local wine industry I’ve come to meet in such a short period of time. Wine really does bring people together, and getting to know and converse with so many people all passionate about the same thing is remarkably invigorating! 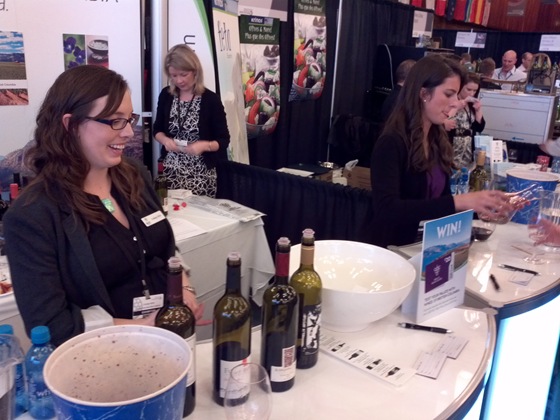 During my visits to the Festival Tasting Room I not only visited some of the 180 winery tables but also perused the booths of a number of vendors and regional tasting stations. Although I didn’t make it to the Wine Australia or the Wines of South Africa stations I took in the New Zealand Wine and the South of France Wines, where friendly representatives were focused on showing the range of wines and price points available. A quick stop by the Riedel tasting station showed off the noticeable difference in Quails’ Gate Stewart Family Reserve Pinot Noir when served in the (good quality) Convention Centre glass, versus the varietal-specific Riedel Vinum Burgundy glass. The richer nose and rounder palate made me all the more motivated to ensure I eventually obtain sufficient numbers of varietal-specific glasses. Lastly I stopped by the Wines of British Columbia tasting station, where not only were a few wineries absent from the festival this year being sampled (Desert Hills, Quinta Ferreira, and Fort Berens) but a challenging blind tasting offered guests a chance to win a $20 VQA Wine Store gift card. I pleasantly surprised myself by successfully picking out the Burrowing Owl Cabernet Franc from amongst Clos du Soleil Signature, Moon Curser Border Vines, and Sandhill Cabernet-Merlot. 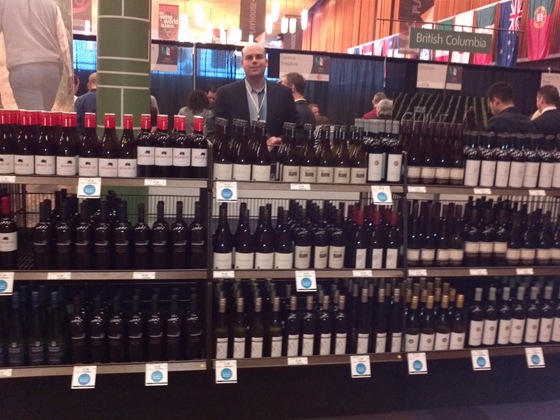 Knowing how quickly some wines sell out from the on-site BC Liquor Store, especially those only carried in the system temporarily for the Festival, I opted to shop early on the first day – I could always return a bottle should I taste it later to serious displeasure. My festival shopping list was short this year due to having made so many recent purchases, plus there were very few new BC wines due to the early opening date of the festival – most local wineries have yet to finish bottling their 2011 (white) wines. I did manage to acquire the eight BC wines on my list, although most of the four highly regarded Tawse wines from Ontario I was hoping to see were already sold out. I only got my hands on the 2010 Riesling, but was doubly excited after tasting the great balance and food friendly palate of this excellent wine. Most of the BC wines I purchased were reserve reds from the 2009 vintage, plus a couple of special Chardonnays and a bonus sold-out Chenin Blanc: 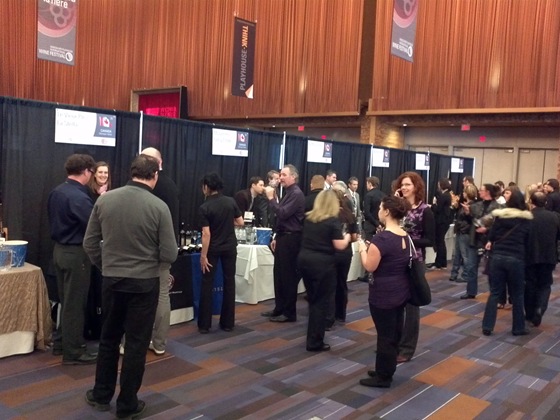 In the Festival Tasting Room I sampled from a number of international wineries that tickled my fancy, but tried my best to focus on visiting all the twenty-two BC wineries present (plus Granville Island’s fantastic Artisan Sake-Maker), along with the one lonely but celebrated Ontario winery – two-time Canadian Winery of the Year Tawse. I’m pleased to say I managed to visit each one, sometimes just to sample a particular wine or two with which I was familiar (or unfamiliar), but occasionally with enough time to stop and talk with the winemaker or proprietor. The immediate focus was on trying the wines on my shopping list, but there were also quite a few to sample which I had previously purchased for my cellar based on the strength of trusted reviews. In addition, a few pleasant surprise wines I either knew little about or didn’t expect to see at the Festival popped up from time to time. With my wine store purchases safely on their way to the nearest BC Liquor Store for pickup, I was free to relax and enjoy the Tasting Room, to see if I had made smart choices, and to investigate any unexpected gems. My Tasting Room Highlights will follow later this week.