Following two days of sampling wines at the Vancouver Convention Centre I was pleased get out and about on the weekend with my wife and attend a lunch tasting organized by the BC Wine Institute, and hosted by Yaletown’s Provence Marinaside. Last year a similar lunch took place at O’Doul’s on Robson Street, which I also attended to great pleasure. Provence took the lunch in a different direction this year, focusing on seafood, along with some small cheese plates and a pair of tarts for dessert; a more limited selection than the omnivorous smorgasbord provided by O’Doul’s. I never expect or request special treatment for my own personal dietary choices, but I was certainly thankful for the plate of delicious vegetarian selections that were provided upon discovering there were a few of us in the room. All things considered I would have to say I still preferred the venue and food at O’Doul’s, although seafood lovers likely thoroughly enjoyed the experience at Provence given the restaurant’s reputation and the sure prowess of Chef Jean-Francis Quaglia. 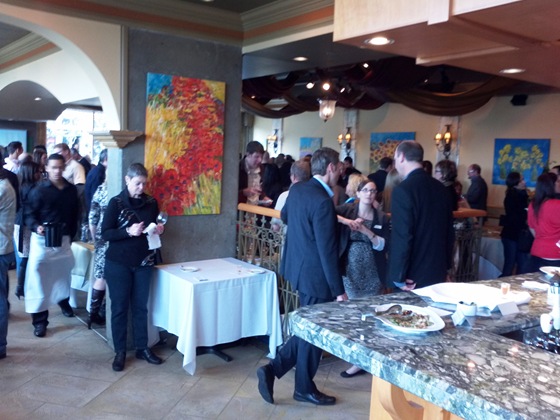 Eighteen of the twenty-two BC wineries at the Festival were present at Provence, with most pouring unique wines not found in the Festival Tasting Room; it is this fact that makes the BC Wine lunch particularly valuable each year. The downside of course is that few of the special wines being poured are available for purchase at the Festival Store, and sometimes include sold-out vintages that make one groan in frustration. Partaking in just such a tease was Red Rooster, pouring their 2009 Reserve Syrah – named Best Red Wine at the 2011 BC Wine Awards last fall. My wife and I both gushed about this delicious wine, full of fruit and spice, with an entertaining hint of licorice on the finish. We felt quite lucky to get a chance to sample it, given the winery was sold out even before the Wine Awards were announced! Another tease came from Poplar Grove in the form of their 2008 “CSM”, a red blend made exclusively for the winery’s club members last year. The blend of Cabernets Sauvignon & Franc, Syrah, and Merlot showed an elegant nose, with dark fruit and tannins on the palate; it should be even better after some cellar time.

Some of the other treats on offer were Painted Rock’s 2008 Syrah and Merlot, a year removed from the current vintage release. The Syrah showed off how well Painted Rock’s wine is aging so far; with cinnamon, nutmeg, and peppercorn on the nose, and a delightfully smooth palate rich in blackberry flavours, plus a sweet tobacco finish. The Merlot is also smoothing out, although it’s still showing more tannin than the Syrah; it finished with a black cherry character my wife particularly enjoyed.

Later, a couple of duelling Chardonnay’s pitted us against each other, when Jackson-Triggs showed off their 2010 Sunrock Chardonnay, with Nk’Mip pouring the 2009 Qwam Qwmt Chardonnay. I favoured the Nk’Mip’s more ostentatious oak, but the creamy, caramel flavours and long “bananas foster” finish found in the subtle Jackson-Triggs iteration were more to her liking.

A few other highlights we mutually enjoyed included a very fun and friendly Reserve Pinot Blanc from Red Rooster, with charming vanilla cupcake flavours and well tempered residual sugar, plus an unoaked Chardonnay from Gray Monk that showed off crisp, fresh peach and nectarine characteristics. Sandhill’s new 2010 Gamay Noir exhibited a candied nose and juicy flavours, while Mission Hill’s 2009 Select Lot Collection Merlot was an explosion of blueberry that took us both by surprise.

The Playhouse Wine Festival consistently provides a valuable opportunity to sample local favourites alongside the international competition. The annual BC Wine Institute lunch is a great opportunity to get out of the sometimes hectic Festival Tasting Room and enjoy great food and some superb bonus wines in the company of likeminded BC wine fans. I certainly hope the lunch continues in future years, although it seems like a larger venue may soon be in order given the growing crowds. The lunch is a highlight of the annual Wine Festival for me and I look forward to attending again next year at another excellent local venue.