Earlier this week Osoyoos-Oliver winery team LaStella and Le Vieux Pin invited guests to their Vancouver offices for samples of the new and upcoming spring releases. The focus was on the white wines and Rosés produced by each winery, as well as a comparative tasting featuring Le Vieux Pin’s Syrah, a new initiative now in its second year of production. Also helping to grease the wheels of critics palates were samples of LaStella’s stunningly delicious imported Sicilian olive oil, produced in partnership with Casa Gusta Organic Fine Food.

LaStella’s new releases include the 2011 vintages of “Leggiero” Unoaked Chardonnay, “Vivace” Pinot Grigio, and “LaStellina” Rosé. The Leggiero is a treat each year, and for 2011 shows plenty of apple flavours on the palate along with a very long, crisp finish. In years past unoaked Chardonnay from BC was certainly in the minority, but it seems that more wineries are discovering the consumer-friendly appeal, particularly when properly made in a way that lets the grapes shine. The Vivace continues the appealing light fruit flavours and shirking of oak with more mixed fruit, tropical characteristics, and a rich citrus finish. The LaStellina (Merlot) Rosé has been another favourite of mine in years past, and the 2011 vintage shows off a relatively consistent aromatic nose, with notes of grapefruit, along with a soft, juicy palate, slightly off-dry in finish. Also newly available from LaStella is the 2009 Fortissimo, the winery’s Super Tuscan blend, incorporating Sangiovese alongside typical Bordeaux grapes. The hot 2009 vintage has yielded a very pleasantly ripe, dark wine with youthful tannins and an overall savoury approach. With lots of layers it will make an ideal partner for plenty of rich, flavourful foods. 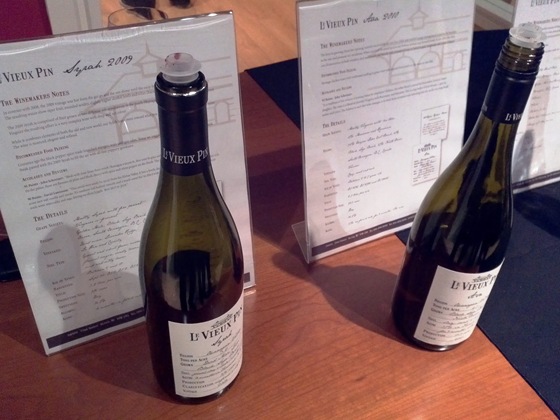 Across the room, on the Le Vieux Pin side of things, winemaker Severine Pinte was showing of new releases such as the 2011 Sauvignon Blanc, the gorgeous 2011 “Vaïla” Rosé, and the equally sublime 2010 “Ava” Viognier blend, plus the aforementioned Syrah. Le Vieux Pin’s 2010 Sauvignon Blanc was incredibly intense and flavourful: the 2011 version can’t hope to top it, but does an admirable job of carrying lots of rich grapefruit aromas and flavours. The beautifully-coloured Rosé comes from Pinot Noir grapes and has a very complex nose with lots of “wow” factor. The winery describes aromas of rhubarb and pink grapefruit, that follow through to a well balanced palate with hints of earthy Pinot Noir. While referred to as “bone dry”, and likely a great food pairing, it doesn’t taste austere in the slightest, and would still be quite suitable for solo sipping – the mark of a very well-made Rosé.

Le Vieux Pin’s 2010 “Ava” blend of Viognier, Marsanne, and Roussanne was sampled at last month’s BCWAS event, where it received rave reviews from those in attendance. The complexity and purity of the precisely calibrated blend (with only a delicate 1.5% Roussanne) is obvious, and with only about 250 cases produced it will sell briskly to those in the know. The $35 price tag may dissuade impulse buyers, but if anything that leaves more for the winery’s many loyal customers who purchase direct in greater volumes each year. 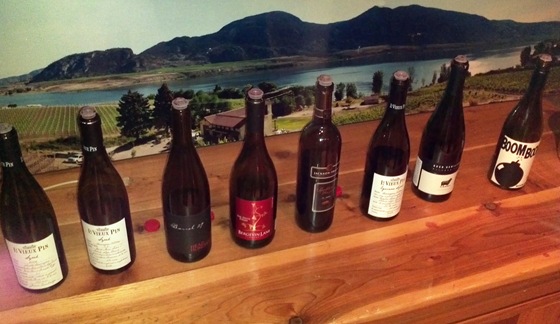 Fortunately the 2009 Syrah has been produced in greater quantities than ever, although 950 cases may not necessarily foretell a glut of this delicious wine, which is already seeing substantial overseas interest from top European restaurants. The new Syrah was another hit at the BCWAS tasting, and showed just as well this week, easily holding up to – and often surpassing – several other international Syrahs being poured for guests at the tasting. The other wines being poured covered the spread from leathery and meaty to sweet fruit bombs; and although it wasn’t a blind tasting, I still felt like the Le Vieux Pin bottles stood out for me, along with a particularly smooth and luscious Jackson-Triggs 2006 Sunrock Shiraz. One wine the “regular” Syrah couldn’t quite surpass was the 2009 Le Vieux Pin Equinoxe Syrah, but that’s hardly a black mark when it’s still in the family. Now if only we couldn’t all have families this agreeable!