In addition to a mixed case of BC’s best from the Playhouse Wine Festival in early March, I’ve also added a few additional exciting BC wines to my collection over the past few weeks. Some of these wines are brand new releases, while a few others were pleasant surprises I never expected to find, or end-of-vintage bottles I couldn’t pass up. 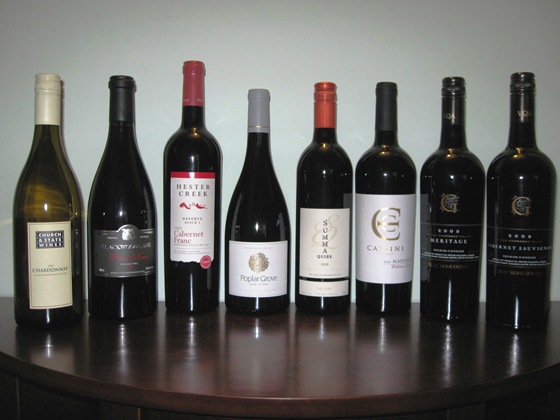 Church & State 2009 Chardonnay: The newer 2010 Chardonnay from Church & State has now supplanted this older vintage, which is no longer listed on the winery’s website. I picked up this bottle from Swirl Yaletown, to complete my small collection of 2009 Chardonnay. The grapes come from two Black Sage vineyards – Gravelbourg, and the winery’s own Coyote Bowl – and were aged in French oak, one third of it new. The 722 cases of this well-pedigreed Chardonnay are most likely nearly gone now, so time will tell if it lives up to the Best of Category award the previous vintage received at the 2010 All Canadian Wine Championships. A respectable silver medal from the 2011 Canadian Wine Awards is nothing to frown at, and certainly helped to prompt my purchase.

Blackwood Lane 2009 Pinot Noir: I’d read a couple of glowing reviews for this wine over the past year, but having not had the chance to visit the Langley winery since then I had given up on acquiring a bottle. Last spring Icon Wines called this wine “the quintessential BC Pinot Noir” (given its strong sense of BC terroir), and John Schreiner called it dramatic, silken, and delicate. To my surprise I recently stumbled upon a small cache in the Steamworks Liquor Store, and quickly snapped up a bottle for the cellar.

Hester Creek 2009 Reserve Cabernet Franc: Although I fully intended on acquiring this wine all along, how could I dawdle upon learning it was awarded Best of Show at the recent Taste BC put on by Liberty Wines? Last year’s 2008 vintage was awarded a gold medal at the Canadian Wine Awards, so I have high hopes for the 2009 given the excellent harvest that year. The winery has taken to indicating the specific block from which the grapes were harvested in 2009, an informative practice slowly catching on as BC vineyards mature along with the knowledge of each site’s specific intricacies and strengths.

Poplar Grove 2008 Syrah: Much ado was made about this wine last year when it received the only gold medal awarded to a Canadian wine at the Decanter World Wine Awards. Having not seen this wine in any stores, or even on the winery’s own online store I put in a call only to learn it was already sold out – most having gone to the Poplar Grove Wine Club (frustrating, but fair enough). You could imagine my surprise when I spotted several bottles on the shelf at Kitsilano Wine Cellar while leisurely perusing! I later learned the store shouldn’t have received that case, but I’m certainly glad they did!

Howling Bluff 2009 Summa Quies Sin Cera: Having heard that proprietor Luke Smith has already removed his remaining Bordeaux varieties to make room for more Pinot Noir I thought it wise to get a bottle of one of the last vintages of his Bordeaux blend to see the light of day. The 2009 is a much more approachable wine than the extremely tannic 2008, but in Luke’s opinion a great Bordeaux blend is a rarity in the Okanagan, especially as far north as Naramata – the 2009 is the exception, not the norm. There is a 2010 version in barrel, and 2011 may follow, but from now on Howling Bluff is pretty much Pinot Noir exclusive.

Cassini 2009 Maximus: Another Bordeaux blend from the successful 2009 vintage comes via Cassini Cellars near Osoyoos. I’ve picked up a bottle of this blend each year since the 2007 vintage, which won gold at the 2010 Canadian Wine Awards. The 2008 and 2009 have both received silver from the same competition. Despite not yet being mentioned on the winery’s own website, the 2009 Maximus is in stores and has already been quite well reviewed. John Schreiner suggests this big, ripe, high-alcohol wine could be laid down until at least 2015, and Icon Wines concurs given the youthful, vibrant, and raw characteristics. Time will tell if the $5 increase in price is fully justified for what Daenna Van Mulligen calls a luscious fruit bowl of a wine.

Gray Monk 2009 Odyssey Meritage & 2009 Odyssey Cabernet Sauvignon: Late last year this long-lived winery released their very first Meritage, plus a varietal Cabernet Sauvignon under the reserve “Odyssey” tier. Being located north of Kelowna the winery wisely sourced grapes from the hotter southern Okanagan to maximize ripeness in these reds. Both wines received bronze medals at the 2011 Canadian Wine Awards, and when John Schreiner previewed the wines in early Fall he was quite impressed. Later consideration by critic Anthony Gismondi was more middling, particularly about the “austere” Meritage; although he felt the Cabernet Sauvignon was “a good effort” that should improve in bottle. When I tried them in person at the Playhouse Wine Festival I found them sweeter than expected, with plenty of tannin. I’m looking forward to seeing how they will age under screwcap.