I recently had the opportunity to enjoy a vertical tasting from one of my favourite BC wineries – Painted Rock. With a small group of new friends we sampled all three vintages of Painted Rock’s highly regarded Syrah, from the first release in 2007 to the recent 2009, along with a mystery Syrah served as a blind comparison. The attendees were all clearly enthusiastic fans of BC wine, and we sipped 8th Generation’s Frizzante Chardonnay and “Confidence” Frizzante Rosé as we discussed our favourites and admired the bottles awaiting us on the table. All four bottles of Syrah had been open – but not decanted – for about three hours by the time we got to actually pouring the wine, giving them some time to open up a little bit in preparation for the big event.

We began with the 2007, from the first vintage at Painted Rock, a release which blew a lot of people away when the winery received TWO extremely rare Lt. Governor’s Awards for Excellence in BC Wine (for their first Cabernet Sauvignon, and the Red Icon blend). In 2010 this Syrah received a bronze medal from the Canadian Wine Awards, and then moved up to silver at the 2011 Awards. Our first impressions were aromas of leather and smoke – a savoury nose was clearly apparent, which led one guest to suggest “maple bacon”. Having spent about three years in bottle by now the tannins have smoothed out substantially, and the texture was very smooth, with a similarly leathery palate that included slight herbaceous characteristics, along with chocolate, coffee, and a hint of bell pepper. Paired with bittersweet chocolate the wine sang!

Moving on to the 2008 there were similar but less intense leather, savoury elements on the nose and palate, with more emphasis on red and black fruit. Some noticed what was described as a fennel/licorice flavour, with hints of stone and slate. A peppery finish rounded out the wine, and more acidity than the 2007 was noticeable on the back palate. The 2008 Syrah was awarded a prominent gold medal at the Canadian Wine Awards last year. Many reviewers have mentioned the risky use of 100% new oak for the 18-month maturation, but the wine appears to have integrated the oak quite well after only a couple of years in the bottle; it quickly became popular among us for walking the fine line between sweet and savoury.

Given the talk about 2009 being one of the hottest years in recent memory there was a lot of curiosity about the next bottle. The trend towards a fruitier, riper wine certainly continued with the 2009 Syrah, as it displayed loads of delicious cherry and black currant notes. The savoury characteristics of the earlier vintages were tamed significantly, as this newest release clearly shows off the fruit-friendly benefits of an intense growing season. Lots of positive reviews have suggested it needs at least a couple more years in bottle to really come into its own; there were certainly some tannins in need of taming. However, it seems likely that the bronze medal from the 2011 Canadian Wine Awards will be followed up by even higher scores in the coming years as it matures.

While we continued to ponder the concepts of vintage variation and the clearly evolving winemaking style at Painted Rock it finally came time to try the “mystery wine”, which we were advised was a BC Syrah from the 2009 vintage. First impressions yielded a chorus of surprised remarks describing the perfumed, floral nose; I also detected hints of spice such as cinnamon or nutmeg. One participant suggested it could even be mistaken for a white wine by the nose alone, if not for the colour of course. On the palate it was clearly an extremely fruit-forward, New World-styled wine, with a full mouthfeel. Although the 2009 Painted Rock Syrah is ripe and fruity, this mystery wine was even more so, and had us guessing with gusto about its origin. Finally our host revealed the true identity, with a trace of irony given that I had already brought it up when discussing characteristics of the Painted Rock: our surprise wine came from Naramata Bench star Laughing Stock. Co-fermented in mostly stainless steel with 8% Viognier this Syrah won a gold medal at the 2011 Canadian Wine Awards, alongside Painted Rock’s 2008 release. Upon hearing the winemaking details everything clicked into place – the aromatic nose, the juicy flavour profile, and the texture and finish helped along by the Viognier. 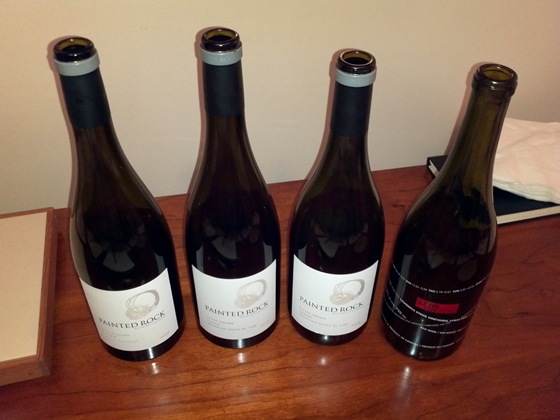 Fortunately there was still wine left in each of the four bottles for additional consideration, and we paid attention to the subtle changes in each one as time passed. At the end of the evening we sipped on La Frenz Tawny Port while toasting our gracious hosts for a spectacular tasting. It wasn’t long before we were discussing the next event, should we be so lucky to amass amongst us sufficient vintages for a similar vertical tasting from another winery: I’m sure everyone is up for the attempt!