It would appear that we have gone and done it again, as it were. Our monthly wine club once again – without any coordination in advance – ended up with a common theme. Interestingly though, this time it was not the wine which we coordinated, but our food that followed a common theme. Each of the three couples in our club ended up bringing highly experimental and unique food to the table last weekend. As we marvelled over our mutual culinary courage we enjoyed a flock of delicious BC wines from establishments both big and small. 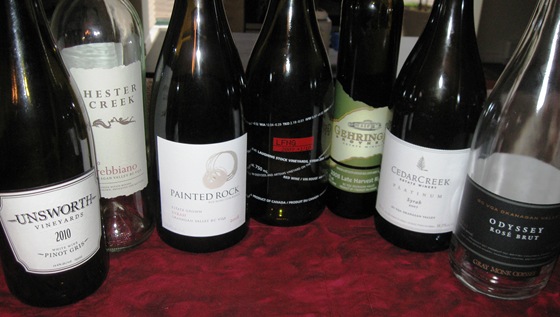 As our appetizer course was being prepared I opened a reception wine, having heard from the chefs that it would take some time to assemble. I’ve kept my eyes on the slickly labelled bottles of Unsworth Pinot Gris on the shelves at Firefly Cambie for some time now, and decided to give this new Vancouver Island winery a try. This Cowichan Valley newcomer has emerged slowly and deliberately, with only one red (a blend) and the Pinot Gris thus far, plus a Port-style wine still in barrel. Local wine writer John Schreiner was pleased with the samples he tried last fall, and I would definitely agree with him regarding the citrus characteristics in the Pinot Gris. The crisp, dry acidity threw a few of us for a loop – it was overheard that this could be guessed as a Sauvignon Blanc – but the flavours were clean and bright; it served well to awaken our palates for the meal to come. 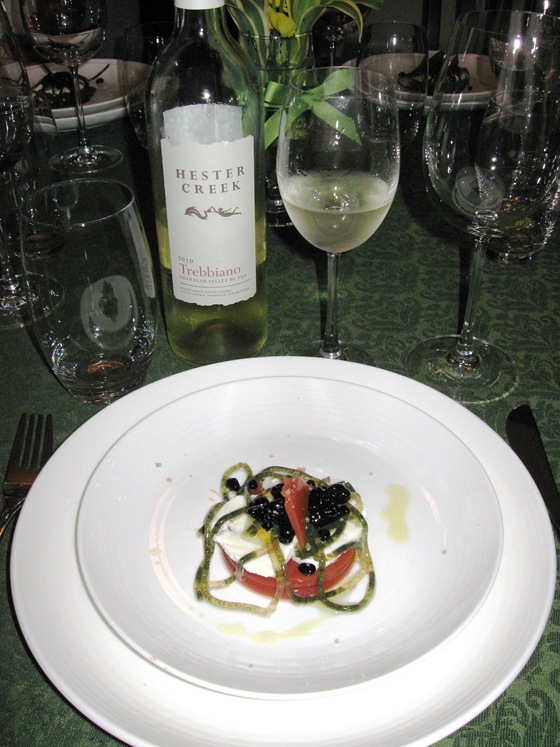 After much fussing and near-surgical preparation our appetizer course finally emerged from the kitchen with a flourish. It would seem that somebody has been using the Molecular Gastronomy kit we got them for Christmas! We were presented with the most amazing-looking “Caprese Salad” in the form of basil noodles, balsamic vinegar pearls, and tomato jelly, atop fresh Bocconcini. To accompany this work of art was an equally unique wine, Hester Creek’s 2010 Trebbiano: the only single varietal bottle of this grape produced in BC. Despite being the second-most widely grown grape in the world, most Trebbiano worldwide is used for blends and Cognac production. Hester Creek decided that a single varietal Trebbiano made with great care would be a welcome addition to BC’s wine market, and the wine regularly sells out. The lovely yeasty nose showed hints of pear and white peach, and the clean, floral palate had a delightful lemon zing that worked especially well with the vinegar in the salad. Everyone remarked how much they were looking forward to trying the newest vintage of this wine, which should be released very soon this Spring.

As we chased the last balsamic pearls around our plates it became time for Team Entree to head to the kitchen for our big experiment: with vital help from my wife I was in the midst of producing Eggplant Osso Buco, including my first attempt at Sous Vide cooking! This wildly ambitious recipe includes mushroom Bolognese, a polenta base, and a side of broccolini, so all four hands were most certainly required! After more than a few frantic moments we managed to pull it all together, and delivered some admittedly gorgeous-looking plates that impressed even the carnivores among us. The heart of palm “bone” in the middle of the eggplant was a source of particular amusement and entertainment (not to mention being quite tasty in itself). 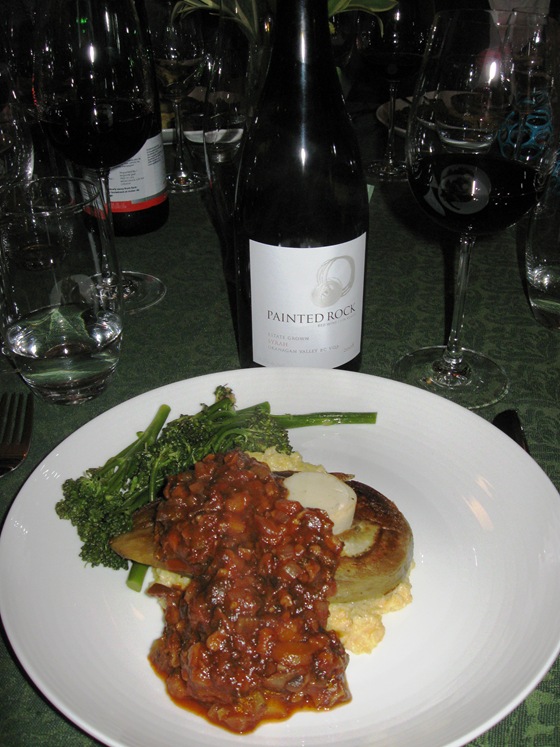 To go along with our unusual feast I had decanted two fantastic gold-medal-winning Syrahs: both Painted Rock’s 2008 Syrah, and Laughing Stock’s 2009 Syrah took home gold from the 2011 Canadian Wine Awards last fall. As we soon discovered, the differences between these two wines were very noticeable. The Painted Rock, which I have enjoyed before a number of times, showed off a very elegant nose with touches of charcoal and leather before the dark fruits and floral aromas became apparent. Flavours of plum and cherry were mentioned as we all enjoyed the smooth textures and nicely softening tannins. The Laughing Stock, on the other hand, demonstrated the benefits of the extremely hot 2009 vintage: the fresh, floral, jammy nose led straight into a bright, juicy, and spicy palate that really asserted itself! The subtle characteristics of Painted Rock’s iteration seemed to be favoured, but I have to admit having a soft spot for the intensity of the Laughing Stock; in any case both decanters emptied out rather quickly.

With so much to talk about already, we could hardly believe it when the dessert team reported plenty more surprises to come. A cocktail shaker could be heard from the kitchen, reminding us that BC spirits have also found their way into our “wine club” now and then. When it came time to serve dessert we were assured that balsamic pearls and faux osso were one thing, but what was to come was quite a radical experiment indeed. A beautiful cake of preserved lemon, and (Gehringer) Late Harvest Riesling-soaked apricots came to us with a scoop of roasted garlic and onion ice cream! To sip with our jaw-dropping semi-savoury dessert were homemade Whiskey Sours, incorporating the deliciously smooth Urban Whiskey from Kelowna. Having started out clear when bottled, the Whiskey before us was now a dark amber colour rich in vanilla flavour, thanks to Urban Distilleries including a small cask stave in each bottle. As I sipped my Sour I tried to wrap my head around the savoury ice cream, which deceived my palate with its cool, creamy texture and expectations of sweetness. The combination of flavours within the entire course actually worked though, and I have to admit the lemon cake was more enjoyable with the ice cream accompaniment. 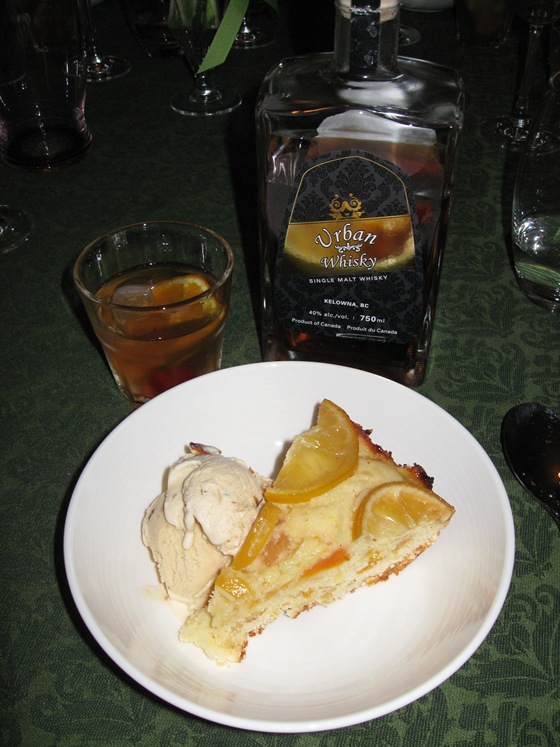 Our adventurous and stimulating meal complete, we settled in for another round of Whiskey Sours and the rest of the Late Harvest Riesling while discussing plans for a late spring trip to the Okanagan. I’m looking forward to visiting some of my favourite wineries (of which there are many by now) and introducing friends to the exciting wines I’ve sampled at tastings over the past year. Eventually some after dinner cheeses found their way to the table and we enjoyed a smooth and tart bottle of CedarCreek 2007 Platinum Syrah, plus a creamy Gray Monk Odyssey Rosé Brut we would have been remiss to leave in the fridge unopened. Our palates once again refreshed we parted ways with mutual congratulations for an extremely  delicious meal that I think surprised all of us in its success. I’m already getting excited and curious for what delights next month holds!