Our wine club this month included a guest couple, bringing the total up to eight attendees, and I finally had the perfect excuse to serve my magnum of Gray Monk 2007 Odyssey Brut! I was on appetizer duty this month, and with so many potential options before me I sought some outside suggestions: an e-mail to Gray Monk produced a reply from none other than winemaker Roger Wong! Roger had the excellent idea to pair this Lt. Governor’s Award-winning sparkling wine with a hot artichoke and spinach dip. With no time to lose I set about mixing up a luxurious melange of cream cheese, Parmesan, Romano, garlic, and a touch of lemon juice. Chopped artichoke hearts and spinach were folded in and the dip baked for 30 minutes as we admired the giant bottle. The pairing was superb: the creamy texture and citrus notes of the Brut perfectly complemented similar flavours in the dip. Baked pitas and tortilla chips were useful for scooping, and some goat cheese-stuffed cherry tomatoes provided an extra touch of colour and tartness. 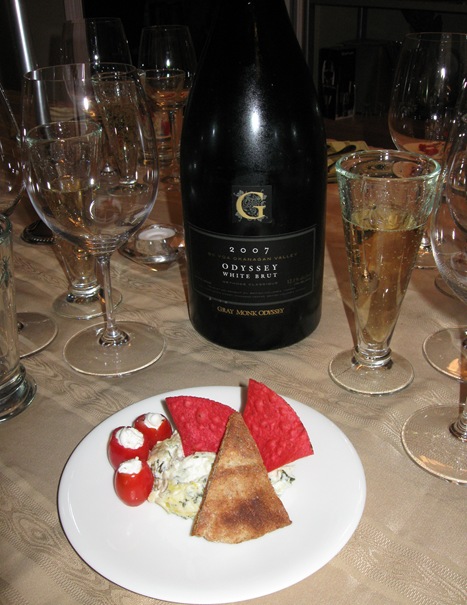 There isn’t much 2007 left on the market at this point, as the 2008 Brut is now available, but it too comes in Magnums for the amazing price of only $45. Nothing quite beats a magnum (except maybe a double-magnum) for dinner-party flair, and Gray Monk’s economical and high-quality take on it now has a permanent place in my heart! 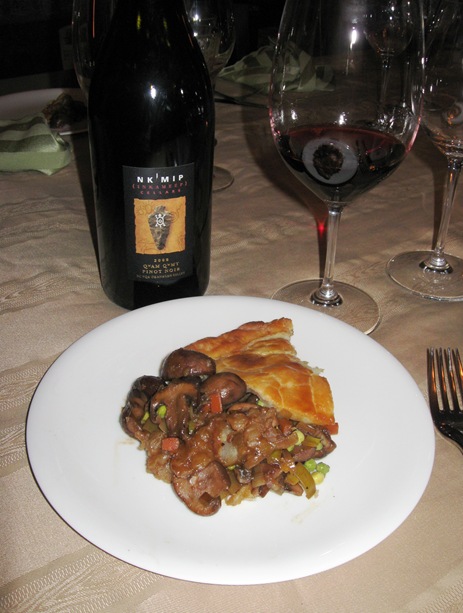 Our entree of the evening came in the form of a duo of pot pies, in turkey and mushroom varieties. On my plate a crispy golden crust cradled a medley of vegetables and juicy mushroom chunks that exuded rich savoury aromas; my mouth is watering just thinking about it!   Nk’Mip’s most recently released reserve Pinot Noir – the 2008 Qwam Qwmt version – was the wine pairing, fresh off it’s Gold Medal performance at the Canadian Wine Awards. (Nk’Mip entered both their 2007 and 2008 Qwam Qwmt Pinots into the 2010 CWAs, and won Golds for both!) Nk’Mip’s vintage report for the 2008 season details myriad challenges to viticulture that year, including hailstorms, windstorms, record rainfall, and heavy frost; this Pinot Noir was clearly a labour of love! The perfumed nose had aromas of currants, cola, and earthy/leathery characteristics. There was a relatively thin mouthfeel and flavours of plum and red fruit; overall a very good complement for the pot pies.

With additional guests having joined us a second dinner wine was also “necessary”, and a bottle of Road 13 2008 Rockpile was very welcome. Rockpile is Road 13’s new Syrah-based blend, and in my experience it is a very welcome addition to the red-blend scene, being suitable for almost any occasion. We smelled raspberry and cedar, and tasted figs alongside well-balanced tannins and acidity. I would be pretty happy to drink Rockpile any day of the week, but I wish that $25 sticker price was a bit lower. If Road 13 intends this 4,500-case wine to be an everyday hero they need to get closer to $20, where some other great BC red blends and Cab-Merlots are hanging out. 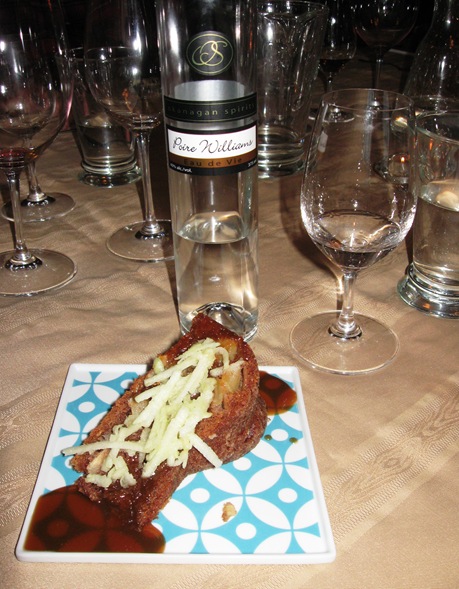 For dessert we cheated a bit on the wine theme with Poire William from Okanagan Spirits; and at 40% alcohol it really was only a bit! Made from extra ripe Bartlett pears, Poire William Eau de Vie is one of several fruit brandies produced by this homegrown craft distillery, a rare gem we are lucky to have here in BC! The brandy went well with the superb apple cake that was deservedly raved about: so fresh and moist, drizzled with homemade caramel sauce and grated fresh apple shavings. I am not ashamed to say I went back for a generous second portion! 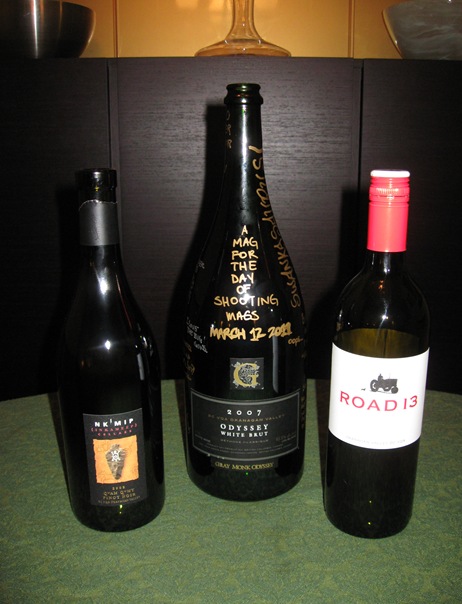 At the end of the night we continued a tradition pertaining to magnum bottles: everyone signed the bottle to remember the occasion. Earlier in the day we had all attended a shooting range in Port Coquitlam – a new experience for most of us – hence the text on the bottle, “A mag for the day of shooting mags.” It was totally unintentional to drink a magnum on the same day many of us handled a magnum, but quite poetic in the end!