This year the Playhouse Wine Festival hosted twenty-two BC wineries, a record number from what I’m told, and in fact some even had to be turned away! In 2011 there were nineteen BC wineries present, and ten of them returned this year (many wineries attend every other year due to the costs and labour involved). Although I was at least familiar with each of the wineries present, some of them I had much more experience with, while others were showing off wines I had always wanted to try and hadn’t yet had the chance. I was pleased to visit each table and sample at least one wine:

Baillie-Grohman Estate Winery: One of only two wineries (the other being Skimmerhorn) in the town of Creston in BC’s Kootenays region, far to the east of the traditional grape-growing Okanagan valley. The winery – which just released their first vintage in 2010 – focuses on white wines, with some Pinot Noir grapes as well for a Blanc de Noir Rosé and Estate Pinot Noir bottlings. The 2009 Gewurztraminer and 2010 Pinot Gris being poured by proprietor Bob Johnson were clean and fresh, with loads of lychee characteristics in the slightly sweet, low acid Gewurztraminer. The 2010 Pinot Noir surprised with rich strawberry aromas and flavours, and a pleasant touch of cherry as well.

Blasted Church Vineyards: This Okanagan Falls winery’s first sparkling wine, the small lot but gleefully-named ‘OMG’, is about to be followed up by a major expansion in quantity. The winery is aiming for a thousand cases of the next vintage  to be released under the supervision of new winemaker Mark Wendenburg, a veteran of Sumac Ridge. I focused on trying the 2008 Cabernet-Merlot, named Best Red at the 2011 All Canadian Wine Championships. The wine was showing dark berry flavours in a balanced presentation that is smoothing out quite nicely; a great bargain red blend for $26 (the 2009 vintage was released last fall).

Burrowing Owl Estate Winery: The Black Sage Bench winery was pouring their Cabernet Franc and Cabernet Sauvignon to fit the Cabernet theme of the Festival this year, but I was eager to try the new Cabernet-Syrah blend ‘Athene’. I missed out on purchasing the first vintage of Athene from 2008, but did acquire the 2009 earlier this year, the vintage being poured at the festival. For a wine that sounds like it would be quite powerful it was surprisingly low in tannin and fairly approachable already, with delicious cherry flavours. I also took the opportunity to sample the 2008 Meritage, a ripe, dark wine with a daunting 14.9% alcohol; it should continue to age well for many years. 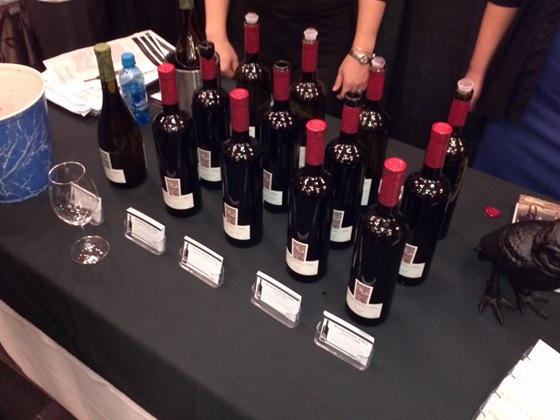 Gray Monk Estate Winery: This veteran winery from north of Kelowna celebrated their 40th anniversary with a sold-out dinner at Edible Canada during the Festival. I sampled some wines from their reserve ‘Odyssey’ tier, including the non-vintage Brut Rosé, a Gamay Noir/Pinot Meunier blend with a yeasty nose, and a tart, but creamy palate. The 2009 Odyssey Cabernet Sauvignon and 2009 Odyssey Meritage were also available, both sweeter than I expected but still fairly tight with firm tannins that would benefit from some cellar time – it should be interesting to see how they age under screwcap. 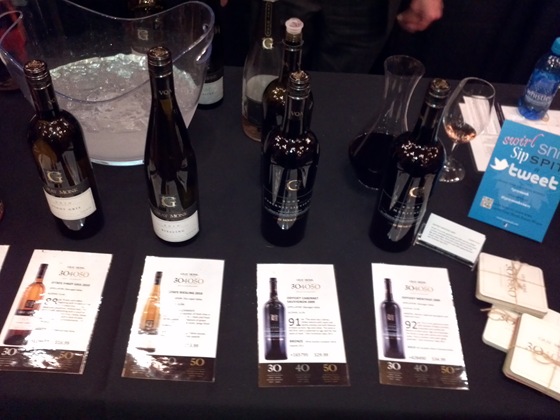 Hester Creek Estate Winery: This Golden Mile winery was one of the few pouring a new 2011 wine, albeit not yet bottled. From a sample bottle I really enjoyed the fresh flavours of the 2011 Trebbianno (it actually reminded me of clean laundry) – hard to believe this rarity in BC is the second most widely planted grape in the world! For 2011 the winery is bottling their Trebbiano in a unique fluted bottle to set it apart from the rest of their wines; it should be a beautiful presentation.

Jackson-Triggs Okanagan Estate: I was very pleased to see that the Gold Series ‘Entourage’ Sparkling Chardonnay was being poured here, having bought a bottle on a whim in January. The nose and palate of this wine transported me to a bakery in full swing, and put a big smile on my face! I also tried out the 2009 Gold Series Sunrock Cabernet Sauvignon, which I had purchased earlier from the Festival Store; it was quite young but showed nice potential to develop over time.

Lake Breeze Vineyard & Winery: This Naramata Bench winery sometimes slips under the radar, but the 12-acre property helps the Moser family produce 10,000 cases a year. The winery produces a wide range of wines that includes a sparkling program, but I was most interested in trying the Bordeaux blend ‘Tempest’, having purchased a bottle of the 2007 last year based on a silver medal from the 2010 Canadian Wine Awards. The 2008 vintage being poured impressed me a great deal with an expressive nose of perfumed vanilla and sweet dark fruit on the palate. I later purchased a bottle from the Festival Store – my only impulse purchase of the Festival!

Le Vieux Pin & LaStella: Having already tasted these portfolios in depth at the February BCWAS Tasting, I focused on the unexpected samples of ‘Retouche’ being poured, Le Vieux Pin’s new Cabernet-Syrah. The 62 cases produced won’t be released until this fall, and there is no need to hurry it either as the wine is very rich and spicy, with full bodied tannins – I’ll be keeping my eyes and ears open for its eventual release date! I also would have been remiss not to try LaStella’s 2008 Maestoso again given the chance, and was soothed by the heady, savoury aromas I often enjoy from this icon wine. 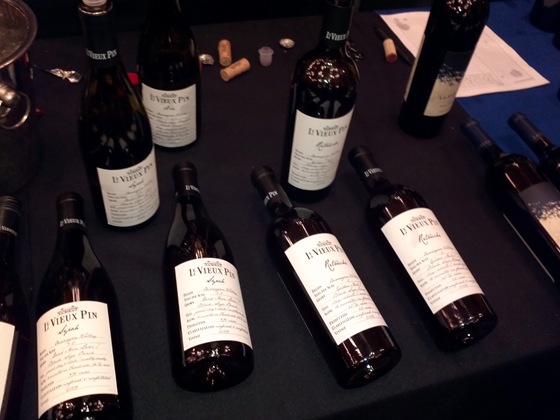 Mission Hill Family Estate: The big West Kelowna winery was pouring not only their great Perpetua Chardonnay, but the brand new 2009 Select Lot Collection Syrah. The 2008 SLC Syrah is currently listed on the winery’s website, but the 2007 was the vintage that took home gold at the 2011 Canadian Wine Awards (2008 received Bronze); it would appear these wines need a couple of years to come into their own. The 2009 was at first mellow on the palate, but showed a spicy finish; time will tell if it starts picking up medals in a couple years. The winery was also pouring their 2007 Oculus – out of magnums no less – which I took the chance to enjoy again for good measure (it having been my favourite when tasted blind at last fall’s Sip Wines Icon Tasting).

Nk’Mip Cellars: I spent some time speaking with Assistant Winemaker Justin Hall, who introduced me to long-time Winemaker Randy Picton as I sampled the variety of wines at the Nk’Mip table. The soon-to-be-released 2010 Riesling was crisp and dry (intentionally so), while the new 2010 Pinot Noir showed a very fresh, fruit-forward profile I enjoyed. The 2009 Qwam Qwmt (Reserve) Cabernet Sauvignon rewarded me with a very enjoyable mouth-filling texture confirming my purchase at the Festival Store was fully justified. Justin explained that the winery has been working on filling out the mid-palate of their reds by punching down the caps more often during fermentation, among other things. The 2009 ‘Mer’r’iym’ icon red blend was similarly mouth-filling, with slightly more tannin than the Cabernet Sauvignon, but a smooth finish nonetheless. Nk’Mip was also showing of their Riesling Icewine, a beautifully silky nectar that consistently – and justifiably – places amongst the top Canadian icewines.

The other half of BC’s representation at the Festival – and my experiences enjoying their wonderful wares – is coming soon!