Earlier this week I discussed some of the wines I particularly enjoyed from the first half of the twenty-two BC wineries present at the Playhouse Wine Festival, what follows are my notes from the remaining eleven wineries:

Osoyoos Larose: It’s always an exciting surprise to see what this Canadian-French partnership will be sampling, considering they only produce two wines. At tastings Osoyoos Larose often brings components of the two red blends they produce, and/or barrel samples of vintages not yet released. For the Playhouse Festival the winery was pouring not only the brand new 2009 ‘Pétales d’Osoyoos’, but a three-year vertical of the icon wine ‘Le Grand Vin’. Last year’s 2007 Grand Vin was – as expected – still quite tight on the palate, with a savoury nose, while the current release 2008 was a bit more green, but with some interesting spiciness. The barrel samples of the upcoming 2009 vintage showed even more tannin, but with an underlying sweetness and fewer savoury elements – courtesy of the hot 2009 harvest perhaps?

Painted Rock Estate Winery: Having enjoyed many samples of Painted Rock’s spectacular wines recently I hardly needed an additional taste to confirm their quality, but I made sure to try a glass of the 2010 Chardonnay given how quickly it’s selling out. Painted Rock proprietor John Skinner explained to me that the 2011 Chardonnay is the product of an unusual combination of three “micro-harvests” that took place over a two week period from the same vines. Each lot was fermented and aged separately, to be combined later to yield the final wine, which John remarked was likely his best yet. I’ve heard that expression from John on an annual basis, but the impressive thing is that he’s right every year! 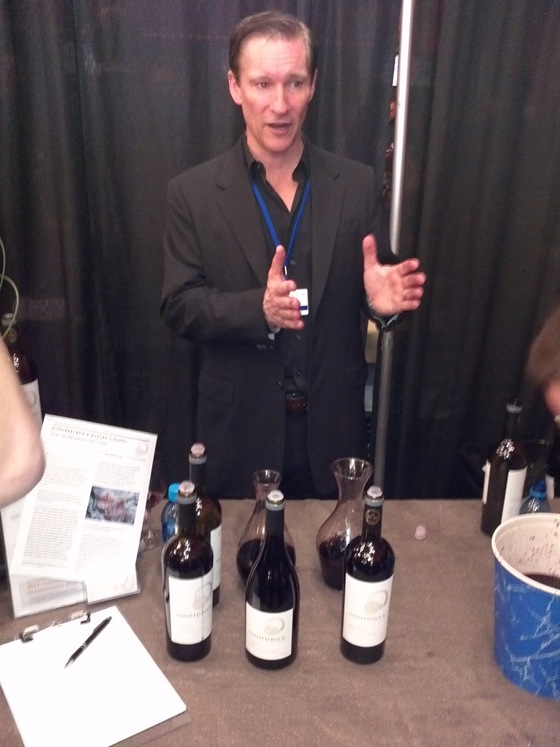 Peller Estates: I was eager to try the 2009 Private Reserve Syrah that Peller was pouring at their table. The Syrah received a gold medal from the 2011 Canadian Wine Awards, noteworthy in particular because its nearest competitor in the gold ranking was fourteen dollars more expensive! To see a twenty dollar wine taking home the same medal as others costing twice as much has to make you curious. My curiosity was appeased with a fresh approach and smooth texture; and although the wine is said to have zero grams of residual sugar it tasted sweeter than expected. It’s bottled under screwcap, which hints that it can be consumed young, although I’m going to try aging a bottle for a couple years at least.

Poplar Grove Winery: This Naramata Bench winery is expanding rapidly into a destination property, with a brand new state-of-the-art winery opening last year and a new restaurant moving over from Summerland this spring. Many of Poplar Grove’s highly collectable wines were being poured at the Festival, including the bright, fruit-forward 2008 Merlot and the rich 2008 Cabernet Franc, with elements of leather and ripe blackberry. I was particularly pleased to see the sold out 2008 Syrah, which the winery is proud to report won the only gold medal for a Canadian wine at the Decanter World Wine Awards last year. The silky smooth texture in the Syrah made me even more excited that I actually found a bottle recently at Kitsilano Wine Cellar (which even the winery was shocked to find out).

Quails’ Gate Winery: this West Kelowna winery describes Pinot Noir as their speciality, and they were showing off their new release 2009 Stewart Family Reserve Pinot Noir at the Festival this year, along with the new 2010 Stewart Family Reserve Chardonnay. As I typically purchase both of these wines each year, the chance to taste them in advance was invaluable. Although the Reserve Pinot Noir is suggested as a comfortably ageable wine it was quite approachable even upon release (although it has been bottle aged by the winery). The Chardonnay was buttery and toasty, with a slightly sweet finish. I’m glad to be adding both bottles to my collection, especially given how challenging it can be to find the Chardonnay.

Red Rooster Winery: Another Naramata bench winery present at the festival, Red Rooster was showing off their fun-loving side with Viewmasters featuring photos of the winery and winemaker Karen Gillis. Karen was pouring her new 2009 Meritage, successor to the Lt. Governor’s Award-winning 2008 vintage, and I found it to be a very approachable, easy-drinking wine. The 2010 Chardonnay being poured showed a slightly nutty, creamy palate that was easy to like. Karen’s 2009 Chardonnay received the only Canadian gold medal at the 2011 Chardonnay du Monde competition in France, so she’s clearly doing a few things right! 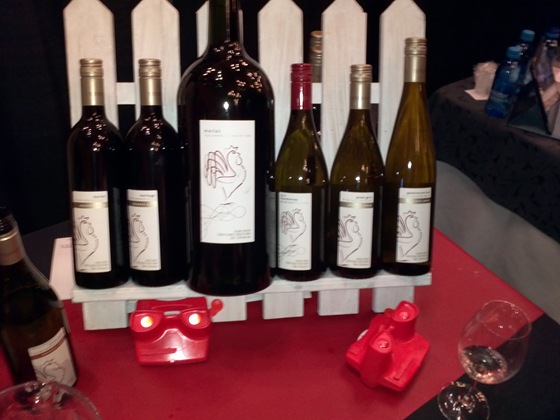 Road 13 Vineyards: I was very excited to finally see this Golden Mile winery’s ‘Fifth Element’ red blend return after a years absence. The 2009 Fifth Element still had a lot of tannin present but an underlying complexity suggests a lot of potential – the bottle I picked up from the Festival Store should do very well in my cellar. Having finished my last bottle of Old Vines Chenin Blanc a while ago I was also very pleased to get the chance to try it again; those crisp, clean, and fresh flavours illustrated why it sold out in the Festival Store so quickly! Interestingly, I also learned that a Late Harvest Chenin Blanc should be forthcoming from Road 13 in the near future, a very exciting prospect!

Sandhill: With no “distracting” social media presence to manage, this somewhat reclusive Kelowna winery focuses on making quality wine under the supervision of the cloistered Howard Soon. At the Festival Howard was pouring a portfolio composed of his exclusive Small Lot wines, including the new 2010 Chardonnay, 2009 Merlot, and 2009 ‘One’ blend, all of which I had purchased in advance at the Festival Store. The Chardonnay was fresh and quite creamy thanks to the barrel fermentation and new French oak, while the Merlot was clearly fruit forward and quite smooth already. The big ‘One’ blend was a lot smoother than expected given the 56% Cabernet Sauvignon content (plus 38% Petit Verdot, and a touch of Malbec and Syrah). With such a rich mouthfeel and great balance the ‘One’ will likely sell out soon, especially with only 225 cases produced.

Sumac Ridge Estate Winery: Among the wines being poured by this well-established winery was the new 2007 Steller’s Jay Brut, their long-standing and dependable sparkling wine. Just as I enjoyed quite a bit of the 2006 last year, I anticipate the 2007 Steller’s Jay to serve as a reliable choice in the coming year; it has a nice clean, creamy mousse finish and well balanced flavours. I also took the opportunity for a sample of Sumac’s Port-style fortified wine ‘Pipe’, which is a dependable dessert wine in our household. Pipe is basically a fortified Meritage blend, aged in oak for three years to yield a warm and rich pairing for everything from fruit and chocolate to nuts and cheeses. 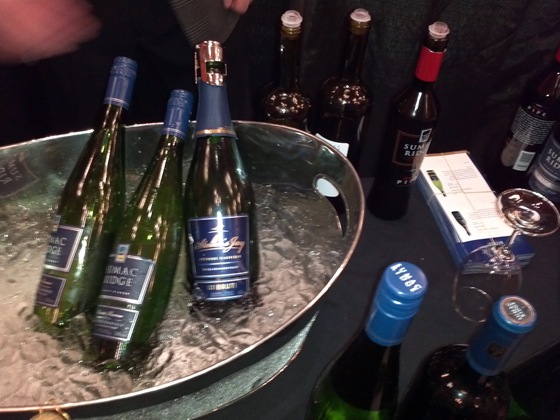 Thornhaven Estate Winery: This Summerland winery has a fairly thorough portfolio of wines, but it is their aromatic whites that receive the most press. Their 2010 Gewurztraminer received one of only two gold medals in the category at the 2011 Canadian Wine Awards (the other gold going to nearby Kalala), and festival guests were lucky enough to sample it: the perfumed, tropical nose led me to a well balanced palate with pleasant residual sweetness – very “varietally correct” if I may say so. I also noticed the 2010 Sauvignon Blanc-Chardonnay, a rare blend that came about inadvertently when the two grapes were accidentally planted together. The nose shows grapefruit and topical notes, but the body is surprisingly full due to the Chardonnay’s contribution – it is a unique and enjoyable glass of wine!

Tinhorn Creek Vineyards: Owner and winemaker Sandra Oldfield was busy showing off her many delicious wines at the Festival this year, including the superb 2Bench White, a complex and food-friendly blend that includes Chardonnay, Sauvignon Blanc, Semillon, and Viognier. If I was to choose a house white, it might be the 2Bench, due to its consistently good combination of tropical and tree fruit characteristics, food versatility, and age-worthiness. While at the Tinhorn table I made sure to grab a glass of 2009 Cabernet Franc as well, another favourite of mine that once again shows superb versatility with food (the winery suggests hearty comfort foods like burgers or lasagne). The hot 2009 vintage has yielded lots of ripe, red fruit that makes the wine excellent on its own as well, and for only $20 it can be a winter and summer staple.

Just as I finished writing this post, I received news that the Vancouver Playhouse Theatre Company is shutting down this weekend. The Playhouse International Wine Festival Society was quick to assure fans that the Festival will carry on, but it remains to be seen quite how the end of the Company will affect the Festival – it having been created as a fundraising venture for the Company. The Festival proudly announced the theme region (California) and global focus (Chardonnay) for next year just days ago, so I hope the 2013 event will take place as scheduled (Feb. 25-Mar. 3), but it seems likely that a name change may be in order at the very least. Although I am saddened at the blow to Vancouver’s cultural identity that will take place with the Theatre’s shutdown, I’m certainly relieved that the Wine Festival is aiming to continue operations, given how much fun I have every year socializing and sipping with friends both old and new.