The schedule of new release wines usually slows down a bit in January, giving collectors a chance to catch their breath after the busy Fall and Christmas season – when many tempting sales and specials are in abundance. Last month I took the chance to fill in a few holes in my collection, as well as snap up some of the few recent releases while I had the chance to concentrate on them: the Spring Wine Festival and reams of new wines will be upon us before we know it! 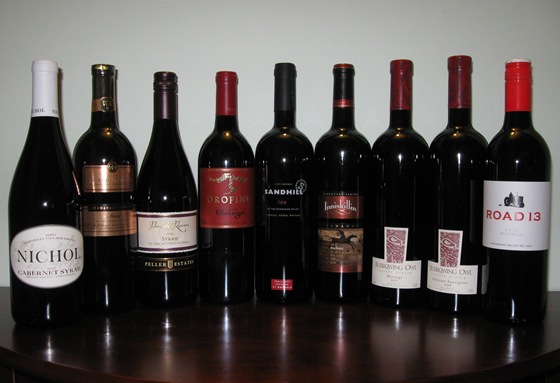 Nichol Vineyards 2007 Cabernet Syrah: A number of excellent wines are produced by this Naramata winery, in particular a well-respected Syrah and some great work with Pinot Noir. I was surprised to see that this unique blend of estate-grown Cabernet Franc and Syrah from the 2007 vintage was still available, considering the relatively low production quantity of 578 cases. The spiced fruit and chocolate profile sounded quite appealing, so I filled one of the last remaining spots in my 2007 compilation with a bottle from Firefly.

Jackson-Triggs 2007 Proprietor’s Grand Reserve Shiraz: This bottle represents one of the last available wines with Jackson-Triggs’ old labelling and nomenclature. The Proprietor’s Grand Reserve tier no longer exists, having been merged for the most part with the Sunrock tier into the new Gold Series wines. Considering this wine went through only 12-months in barrel, it’s surprisingly still available more than four years after harvest, and still active on the awards circuit as well: Jackson-Triggs brought home a gold medal from the BC Wine Awards at the Fall Wine Festival, and a silver from the 2011 Canadian Wine Awards. I took advantage of a post-Christmas 15% off sale from Vincor to buy this already economical wine at a superb price as part of a mixed case.

Peller 2009 Private Reserve Syrah: A surprise gold medal winner at the Canadian Wine Awards, this $20 Syrah faced stiff competition from the likes of Church & State, Painted Rock, Laughing Stock, and other big names. Not that Peller Estates is a small winery by any stretch, but it’s rare to see a winner this economical when the competition sells for up to twice as much. I filled out my collection of gold medal Syrah when I found a bottle at Village VQA wines. Most VQA stores should carry this vintage now, but only 889 cases were made so this potent Syrah won’t last too long at such an approachable price point.

Orofino 2009 Beleza: The new release of this Similkameen winery’s signature blend took place recently, and fans would be wise to grab a bottle like I did at Firefly, which has reliably carried the full range of Orofino’s relatively small lot wines for some time. The blend for 2009 is primarily Merlot and Cabernet Sauvignon, with a surprisingly high 20% contribution from Petit Verdot; that bold blend combined with 20 months in barrel should yield a powerful and ageable wine similar to the well-received 2008 version. Collectors could also consider an aggressively-priced magnum direct from the winery: Orofino garners a great deal of respect from me for not inflating their magnum price beyond the cost of two bottles.

Sandhill 2009 Small Lots Two: As is common for Sandhill’s Small Lot wines this Cabernet Sauvignon-heavy red blend appeared in BC Liquor Stores recently with little fanfare. Having missed the entire 2008 vintage of the Small Lots “One”, “Two”, and “Three” blends I didn’t dawdle in getting a bottle, despite little available information or reviews. Seeing as the 2008 wines never even made it to stores – and barely showed up on Sandhill’s website – I felt lucky to obtain this bottle, considering only 525 cases were produced.

Inniskillin 2009 Discovery Series Malbec: Another bottle from the mixed case I ordered via Great Estates of the Okanagan, I’d been looking for this wine since hearing about the gold medal it received at the BC Wine Awards last Fall. Seeing as there are so few varietal Malbecs produced in BC I’m always pleased to acquire particularly good ones. I actually had the chance the try this wine recently at a friend’s, and was impressed with the fresh, bright fruit and spicy finish. Other local Malbecs can often be had (when they aren’t sold out) from Cassini, CedarCreek, Desert Hills, Kettle Valley, La Frenz, Red Rooster, and Sandhill.

Burrowing Owl 2009 Meritage & Cabernet Sauvignon: Burrowing Owl has a habit of releasing their wines one at a time – presumably when they are ready – which makes purchasing a bit of a challenge, so a mixed case I ordered last Fall didn’t include the new Meritage, or the Cabernet Sauvignon. Fortunately the winery ships in smaller increments (as few as two bottles), so I recently piggybacked on a friend’s small order with a couple bottles of my own. So far little information is available about these new releases but they do have good pedigree: the 2008 vintages each received a silver medal at the 2011 Canadian Wine Awards. The winery appears to have commissioned Rhys Pender to write detailed tasting notes, and his comments certainly inspire confidence.

Road 13 2010 Rockpile: Just recently released and showing up in most public and private stores (4,000 cases were made), this wine represents the third year of Road 13’s new red blend. The Syrah component has increased markedly this year, going up from 45% last year (with 45% Merlot) to 82% for 2010. It’s actually quite a lot of fun seeing how this blend changes from year to year: Rockpile shows Road 13’s realistic and flexible approach to winemaking – as each vintage differs so too does the blend. Although this wine is produced in a style that is approachable in its youth, I’ve nonetheless cellared some each year to see how it ages, something about which I imagine Road 13 is equally curious!