After finally getting around to joining the BC Wine Appreciation Society I attended my first event Tuesday night – an exciting tasting of CedarCreek wines guided by proprietor Gordon Fitzpatrick. The event was sold out, with significantly more members and guests in attendance than usual, which speaks to CedarCreek’s reputation and desirability. We were certainly not disappointed: as we sat down we found poured in front of us nine excellent wines, including six from the Platinum series of CedarCreek’s best wines. 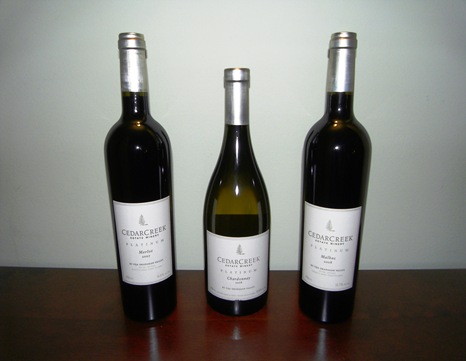 We began with a tasting of Ehrenfelser from the BCWAS cellar, a well-preserved (thanks to a Stelvin closure) sample from the excellent 2008 vintage. Having enjoyed several bottles of the 2009 last summer it seemed to me that the 2008 was a bit more acidic than my recollection of the 2009, but still in possession of those floral fruity aromatics and fresh flavour Ehrenfelser is so well known for. CedarCreek is an Ehrenfelser champ, and many fans are no doubt eager to get their hands on the 2010 vintage when it is released in April; it will likely sell out fairly quickly, just as previous vintages have done.

The only other whites being sampled that evening comprised  CedarCreek’s 2008 Chardonnays: the regular Estate Chardonnay was available to compare with the Platinum version. Both versions were good, and the Estate Chardonnay at $18 represents an excellent bargain in particular. I myself preferred the Platinum version for its amazingly creamy mouth-feel and richness. Having just purchased a bottle for near-term aging based on positive reviews I am eager to acquire a second bottle to open even sooner so as to share that wonderful texture with my wife, who couldn’t attend the tasting.

Following the Chardonnay there was a sample of the Platinum Pinot Noir, awarded Best of Category at the 2010 All Canadian Wine Championships: it was pleasantly juicy with enjoyable strawberry notes. It would have been interesting to compare Pinot Noirs as we did with the Chardonnay, but it was soon on to Merlot where such a comparison was once again available. The 2007 Platinum Merlot picked up a Gold Medal at the Canadian Wine Awards, following in the large footsteps of its Lt. Governor’s Award-winning older sibling from 2006. When comparing the Estate version with the Platinum what was immediately apparent was the difference in residual sugar: the Platinum wine has significantly less sugar and was definitely my favourite of the two. My preference notwithstanding, the Estate Merlot is certainly a quality wine, and the majority at my table felt that two bottles of $20 Estate Merlot would be slightly preferred over one bottle of Platinum.

Three big red wines remained in front of us – all Platinum-series – consisting of the 2007 Syrah, 2007 Meritage, and the 2008 Malbec. The Meritage is unlikely to show up in many stores just yet, as the 2006 is still being sold, but the Syrah has been out since 2009, and the Malbec was recently released. The peppery Syrah was actually smoother than CedarCreek’s tasting notes suggest in describing “firm tannins”. I have a bottle myself, and will give it a couple of years to “integrate” before trying it again, although it was quite satisfactory to my tastes in the present. The Meritage was thoroughly enjoyed by the crowd, and I would have to agree: it was well-rounded and nicely blended, with pleasant ripe fruit. Interestingly the blend contains 18% Malbec and only 5% Cabernet Franc, proportions you would typically expect to be reversed, but it works just fine in this case.

The final wine of the evening was one I had been waiting for since arriving – the Platinum Malbec. In 2007 CedarCreek released their first Platinum Malbec, only 84 cases of a complex wine John Schreiner called “a tour de force” worthy of 95 points! Fortunately production was nearly tripled for the 2008 vintage, plus a price reduction of $10 was quite welcome. I have purchased a bottle of each vintage, and have now also sampled both as well, with much enjoyment. Although the tasting notes mention violets and lavender on the nose, in this particular instance I kept smelling mint chocolate. I didn’t want to finish the little bit left in my glass, so that I could keep inhaling its wonderful aromas! Considering how little single varietal Malbec is to be found in BC this is a wine to cherish.

Thanks for the great review. Glad you liked the Malbec. That was a pet project for a long time before we ever released it as a varietal wine and we're pretty happy with the results.