Late last year I picked up the Lang Vineyards 2008 Reserve Riesling, adding it to my 2006 and 2007 bottles for what I thought would become an interesting three year vertical. But then last month while perusing the shelves of the Signature BC Liquor Store at 39th and Cambie I noticed a single bottle of Lang 2003 Riesling sitting amongst all the 2008s! I took it to the register with trepidation, asking meekly what the price was – it scanned at the same price as all the rest of the (2008) bottles! Without much to lose I brought it home, not knowing how it had been stored for the past seven years, or how it found its way on to the store shelf; at worst I had some expensive vinegar!

Last night I finally got the opportunity to open up those Rieslings for a comparative tasting over sushi with some friends. It was a very intriguing and fascinating experience to observe the differences amongst the four different bottles, in everything from colour and aroma to taste and acidity. Note also the changes that have taken place in bottle size and format; apparently Lang has been fine-tuning their presentation for quite a while. Sadly we may not see any more of these well known Rieslings given Lang’s recent collapse into receivership. 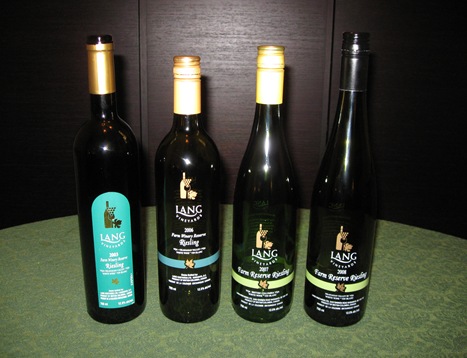 2003: The only bottle with a natural cork enclosure, and hence the one I was most worried about given its uncertain past. Fortunately the cork was in great shape, and the wine had survived just fine! A golden honey colour was quite pleasing to the eye, and that well known faint nose of petrol was there as well. Sweet flavours of apple were present on the palate, and virtually no acidity was evident after several years in bottle; a somewhat flat finish but one that I don’t hold against it however.

2006: There was quite a bit more petrol on the nose in this one; it really jumped out of the glass without hesitation. In fact, very little fruit was present beyond that powerful scent, although a bit of honey poked through. There was definitely more tart acidity on the palate than with the 2003, and some honey flavours came out as the wine warmed slightly. The consensus was that it was actually hard to detect much beyond the petrol!

2007: A deeper colour than the 2006 vintage, and with less petrol on the nose this version lent itself to analysis more easily. Various comments included aromas and flavours of honeydew, citrus, and pineapple, with a vanilla finish; the acidity was not as strong as in the 2006 either. I would probably hold this up as my favourite of the four.

2008: This most recent release was the favourite for others. Very pale in colour, with aromas of tropical fruits and vanilla, rosewater and orange blossom. One comment that sticks in my head was “Bounce sheet”: that familiar mountain-fresh, meadow flower smell one associates with freshly laundered sheets! It had virtually no petrol aromas and in fact led some to comment they would be hard-pressed to immediately identify it as Riesling.

There is still some Lang 2008 Riesling available in stores, in both VQA stores and in BC Liquor Stores. We may or may not see the 2009 vintage appear one day, depending on how Lang’s inventory is sold off. Whomever buys that wine – maybe already in bottles and ready for sale – will get to decide if they want to sell it as is or perhaps incorporate it into their own blend. Our tasting was a tribute of sorts I suppose: so long Holman Lang, we hardly knew ye!