Last month while perusing the Sandhill Wines website I noticed some additions to their online store: new vintages have been released of some (very) Small Lot wines I had acquired in the past. Without any fanfare or notice Sandhill have made available the new vintages of their Small Lots Chardonnay (2009), Malbec (2008), and Merlot (2008)! All three of these wines – like most of the Small Lots portfolio – have been generously feted in the past, and with the number of barrels produced in the single digits there is not much time to waste in acquiring some. I would recommend a visit to Sandhill’s recently nicely renewed website if you’re interested: unlike many wineries Sandhill is willing to ship in multiples of 6 bottles or even fewer, if like me you don’t have room for a full case from every one of BC’s many excellent wineries!

Small Lots Chardonnay (2009): This the second vintage of winemaker Howard Soon’s foray into single block Chardonnay. He managed to increase production to 190 cases this year from 132 in last year’s initial vintage. That first release from the 2008 vintage received very respectable reviews, being described as a “tour de force” by John Schreiner. The 2008 was also awarded Best of Category at the Okanagan Spring Wine Festival. Needless to say I didn’t waste any time adding this wine to my online shopping cart – I hope for similarly good things from this vintage.

Small Lots Malbec (2008): Sandhill has produced Small Lots Malbec for at least several years, and this new release is the second vintage I have acquired. The 2007 release received a silver medal at the Canadian Wine Awards, and the same at the Okanagan Fall Wine Festival (a competition now referred to as the BC Wine Awards). Anthony Gismondi has been reviewing this Malbec over many years, and last year’s vintage received his highest score yet and mention of the good potential for this varietal at Sandhill. Let’s hope the 2008 vintage builds on Sandhill’s growing expertise. The winery describes production in terms of barrels this year – 8 of them to be exact – which equates to approximately 200 cases, a very small lot wine once again.

Small Lots Merlot (2008): Like the Chardonnay this Merlot is also a new experiment with single block production. Howard produced only 119 cases last year in the first release, and managed to pick up a prestigious Lt. Governor’s Award for the effort, not to mention a gold medal at the Canadian Wine Awards! For 2008 a few more cases were added to the production quantity, rounding it out at eight barrels according to Sandhill. The new vintage definitely has some big shoes to fill, but if even some of the praise and compliments from last year are repeated this will be a very wise addition to my collection indeed. 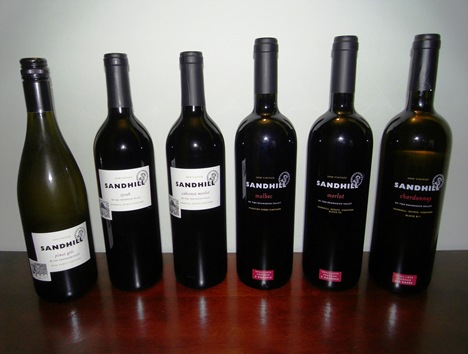 As you can see from the photo above I also picked up some of Sandhill’s other wines to round out a case, all of which I am pleased to drink relatively soon – unlike the Small Lots wines which are destined for a bit of cellar time. That is not to say that Sandhill’s “regular” wines would suffer in the cellar, just that I was running dangerously low on some staples like Pinot Gris, Syrah, and Cab-Merlot! I am certain that these wines will all be enjoyed relatively soon. Sandhill’s reputation for quality, and my past experience with their solid portfolio gave me the confidence to pick what I needed for near-term consumption without concern.