It’s particularly apt that I’m drinking Sauvignon Blanc as I write this: Mother Nature has played a cruel trick on us recently as the sun shines brightly through some of the coldest skies in weeks. We all thought Spring was just around the corner but recently the high temperatures have hovered just above freezing for days! Crisp white wines are often favoured in the summer months, but there comes a point in the midst of winter that you just have to rebel and say “Dammit, I’m having some chilled Sauvignon Blanc with my Spanakopita!”

My friends and I had a similar idea last Friday, when we bucked the winter trend of big, comforting red wines for an evening of opposites. For dinner I made up a batch of quesadillas and Mexican fried rice, with homemade guacamole (always leagues better than store bought). To drink with it I opened my last bottle of 8th Generation 2009 Rosé. There’s something so uplifting about Rosé in winter – it reminds one of warmer days ahead when you can sit on the balcony and enjoy daylight until 10pm – and 8th Generation always knocks it out of the park with their Pinot Meunier-based version. I’ve learned to stock up early in the summer because it sells out quickly; 8th Generation has built up a loyal following due to their consistent success with this varietal. 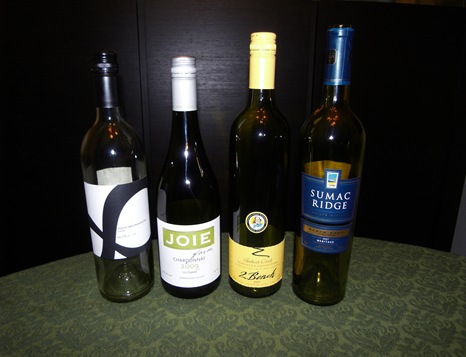 As we continued with dinner I brought out a bottle of Joie 2009 Unoaked Chardonnay to continue with the fresh and fruity summer-time motif. I hadn’t tried this particular wine before, although I’ve had Joie’s oaked Reserve Chardonnays from the 2006 and 2007 vintages: the 2007 was fantastic and quite worthy of the Lt. Governor’s medal it was awarded. As an unoaked wine the 2009 Chardonnay is obviously intended to showcase the floral, fruit-forward character of the varietal, especially with the inclusion of 16% Chardonnay Musqué. There have been some positive reviews for this wine, and Joie is likely to be releasing their 2010 vintage later this spring. Our experience was mixed however, as the initial nose reminded me of a washed rind cheese: perhaps that is the leesy characteristics that Anthony Gismondi describes? After it had a chance to breathe the wine seemed to come together and better express itself: some of the orchard fruit and floral aromas became more prevalent over time. A confusing experience, and I’m curious how my remaining bottle will present itself, as well as how the 2010 vintage will stack up.

With the evening’s theme becoming apparent, I sought out another bottle of white to investigate and enjoy. Fingers crossed I opened my Tinhorn Creek 2007 2Bench White. I remember buying this wine in Wall Centre Fine Spirits: it was sitting there alone in the bin ends section, a little too close to the window for my comfort, but I took a chance. The current release of 2Bench White is from the 2009 vintage, but the 2Bench series has good aging potential so I had high hopes for the 2007, based on the praise for its many excellent qualities. Ironically I did not experience the floral and tropical fruit qualities thus described as much as I was immediately reminded of vanilla cupcakes – it was delicious! Winemaker Sandra Oldfield changes the proportions of this blend every year so it’s hard to predict what the 2008 and 2009 vintages will lead to, especially over time, but I thoroughly enjoyed the 2007 in 2011!

The ladies were headed to a personal training session in the morning, so it was decided that only one more bottle was in order. With instructions to find something with little residual sugar I knew just what to pull: Sumac Ridge 2007 Black Sage White Meritage. This classic Bordeaux blend of Sauvignon Blanc and Semillon would make a good conclusion to the evening, with “finesse and balance” to top off an adventurous and non-traditional winter tasting. We were all pleased with the fresh tropical fruits, and I was struck by a smoky finish slightly reminiscent of campfire. Sumac Ridge declares this to be a diverse food pairing wine, and I have no doubt it is. If there is more of the 2007 on the market – or subsequent vintages – I look forward to trying it again with food; it’s a handy wine to have on hand for multiple situations.