With all the hubbub this month I’ve been busy posting about Taste BC and my Wine Club with friends, and haven’t had a chance yet to talk about some of the new wines I’ve added to my collection in January! Fortunately I’ve still got a few minutes left this month to mention some of the cherished new additions I sought out over the past few weeks.

Inside City Square Shopping Centre across from Vancouver City Hall there is a small unassuming private liquor store in which I often find surprisingly rare finds. This month was no exception as I picked up a Poplar Grove Merlot for a reasonable price, and two great wines from Orofino at winery pricing!

Poplar Grove Merlot (2006): In addition to their high quality white wines Poplar Grove produces some powerful and highly acclaimed reds including Cabernet Franc, Syrah, and this Merlot. Their wine can be a little hard to find so I’m glad to have picked up what sounds like a beautifully complex wine that even four years out still has at least a couple years to go before full maturity.

Orofino Red Bridge Red (2008): Orofino was one of the first wineries I visited in person, and all by a happy accident after my wife and I got a little lost driving back from the Okanagan! We stopped in the Similkameen valley for directions at what turned out to be Orofino Winery, and enjoyed their wines so much we later ordered a whole case. Since those early days Orofino has gained steam each year, in large part due to their very well received Red Bridge Red Merlot. I picked up the 2007 vintage at the winery in 2009 on my second visit, and buying the 2008 was a no-brainer.

Orofino Cabernet Sauvignon (2007): An experiment with Cabernet Sauvignon has yielded what sounds like an excellent small lots wine. Only time will tell if they release another vintage, but one would hope so based on the critical success of the 2007 (Silver at the 2010 All Canadian Wine Championships) and very positive acclaim from critics. Orofino seems to have an enviable a habit of very strong initial releases. 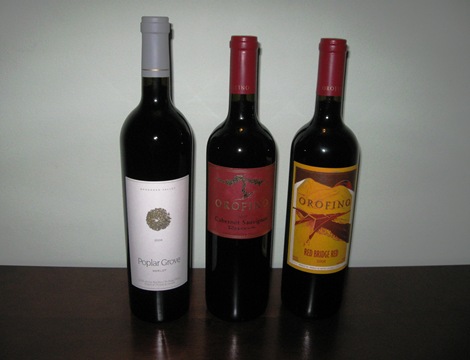 Firefly has done a good job of acquiring some of those non-VQA wines and others you simply don’t see too often in the many VQA stores that dot Metro Vancouver: wineries like Black Cloud, Blue Mountain, Joie, and Nichol for example. They’ve made a wise choice not to directly compete with LDB pricing too often, especially with a BC Liquor Store only blocks away (from their Cambie location).

Black Cloud Pinot Noir Altostratus (2008): Township 7 winemaker Bradley Cooper has released a couple of charming Pinot Noirs under his own label, from both the 2006 and 2008 vintages. With the 2006 already in my hands I knew I needed a bottle of the highly regarded 2008 to “collect the whole set”.

Nichol Syrah (2008): Nichol has a very creative portfolio of wines including some based on the rare St. Laurent grape, plus a tasty-sounding Cabernet Franc-Syrah blend and a uniquely peachy-coloured Pinot Gris that always grabs people’s attention. Among their recent red releases is this Syrah that has got lots of people talking, in a good way: with words like bold, unique, and chic. I can’t wait to try it!

Mission Hill Reserve Viognier (2008): This wine was not on my list – primarily due to its Sold Out status at the winery – so it was a very pleasant surprise impulse purchase. Seeing several on the shelf at Firefly I quickly checked my smartphone to be sure I was remembering the details right and just as quickly picked up a bottle of this solid value wine that possesses a “richness and power that is rare in whites.” 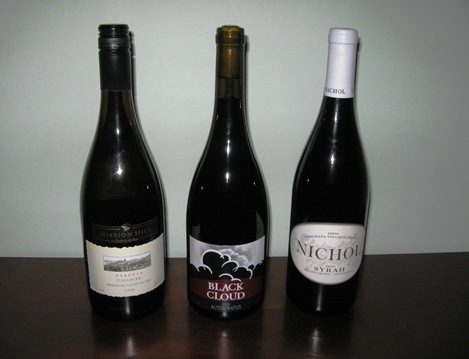 Taylorwood is one of my favourite wine shops for VQA new releases: their staff is highly knowledgeable about BC wines and they host some really excellent weekly tastings in their spacious location in Yaletown. They recently started sending what I hope will be a weekly newsletter including details of new arrivals, which is what prompted a visit for some wonderful Malbecs, among other treats.

CedarCreek Platinum Malbec (2008): Last year CedarCreek released their first single-varietal Malbec, only 84 cases of a rare and complex wine I scooped up from the Playhouse Wine Festival Shop last April. Local writer John Schreiner described it as one of the best Malbecs he’d ever tasted in BC, or Argentina! There are no reviews out yet for the 2008 vintage, but it just received a Gold Medal from the Canadian Wine Awards, so it was a purchase I made without hesitation. I’m particularly glad that CedarCreek decreased the price by $10 (from $55), and nearly tripled production (to 210 cases).

Cassini Cellars Malbec (2008): ready to battle for my Malbec love is this small production release from new winery Cassini (only 174 cases). I didn’t get to try this wine at the recent Taste BC, but it’s clear Cassini has another winner on their hands (Silver Medals at both ACWC and CWA). It’s been described as a delicious wine possessing a silky, fluid texture. After some cellar time I may toss the above two Malbecs up against Sandhill’s Small Lots version – and maybe Inniskillin’s Discovery Series – for a Malbec battle royale!

Cassini Cellars Maximus (2008): Cassini’s Cab-heavy red blend also received Silver at the Canadian Wine Awards, while it’s older sibling from 2007 took home a Gold medal. Fortunately I added the 2007 to my collection before it sold out, and now the 2008 holds a spot as well. John Schreiner thinks highly of this ripe red, which will hopefully have many subsequent younger siblings to come.

Twisted Tree Tannat (2008): This very exclusive varietal from Twisted Tree is their only red wine left that isn’t sold out. Hopefully some new releases are coming this spring or they’re going to get awfully bored in the shipping “department” at Twisted Tree! In an odd twist this wine came out in early 2010, before their 2007 Tannat (sold out). It is described as bold and vibrant, with firm tannins that I’m sure will do well in the cellar for a little while. 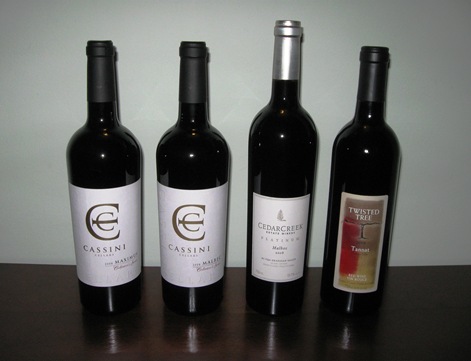 I read your blog for the first (but certainly not the last)time this morning, thanks to a tweet from @PoplarGrove. I really enjoyed the read and love (LOVE) your affinity for BC wine! The quotation from Galileo is groovy, too.