January Wine Club: Double or Nothing!

Earlier this month our friendly wine club celebrated what I suppose you could call Season 2: with each couple having hosted once we’ve come full circle and my wife and I were once again hosts. We took on the responsibility of providing the main course, and fortunately I already had a great wine picked out, I just needed to come up with a recipe!

Before the entree however, our appetizer course arrived in components nearly too many to count, and was slowly laid out on the table one little bowl at a time. Ready for assembly were enoki mushrooms, chopped peanuts, cilantro, basil, and bean sprouts, plus crispy cubed tofu and some marinated shrimp for the carnivores; on the stove was the most mouth-watering broth ready to receive rice noodles – we were having Asian-inspired soup! The aromas filled the kitchen as we learned about the accompanying wine – Gray Monk 2009 Siegerrebe – an off-dry grape related to Gewurztraminer grown by only a handful of BC vineyards. With 19 grams of residual sugar they aren’t kidding when they say “off-dry”, but Gray Monk’s iteration is sufficiently well-balanced that the wine worked quite well with the soup. The fresh finish paired nicely with the herbs and vegetables sprinkled in our bowls, and kept us coming back for more; fortunately there was enough delicious soup for seconds as well! Equally fortunately was the fact that our appetizer chefs thought to bring a second bottle of Gray Monk wine, this one a 2009 Gewurztraminer. Gray Monk makes some really lovely white wines, in particular those off-dry styles like Riesling, Gewurztraminer, Siegerrebe, Ehrenfelser, and Kerner. Having been involved in BC’s wine industry for nearly four decades the Heiss family that owns Gray Monk have really got it down to a science. 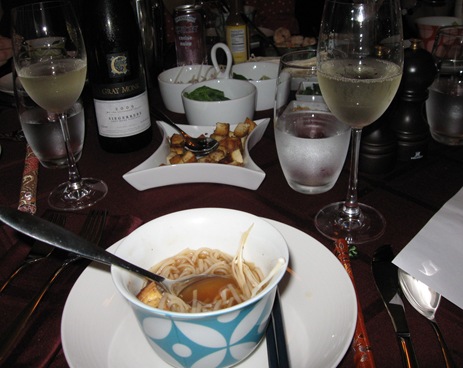 Now the Wine Club charter specifically states one bottle per couple, but it would seem we all had the same idea this particular evening, because I had also prepared two bottles of my choice – Jackson-Triggs Sunrock Vineyard 2005 Cabernet Sauvignon. This wine has been in stores for what seems like ages, and surprisingly there is still plenty to be had – almost 700 bottles in BC Liquor Stores alone. Being able to pick up a bottle of well-made nicely aged Cab Sauv at your neighbourhood BC Liquor Store is a real blessing, because it is ready to drink now, but could no doubt continue to age well for a few more years. To go along with our “magnum” of Cab I’d made a new recipe reminiscent of the holiday season: Caramelized Onion-Butternut Roast with Chestnuts. Out of the oven came a warm comforting casserole of roasted onions, butternut squash, chestnuts and white beans, sprinkled with sage breadcrumbs. Served alongside some roasted Brussels sprouts the casserole was an excellent match for the smooth, rich red wine. Although the equally good 2006 vintage (Canadian Wine Awards 2010 Silver) will start showing up in stores any day now you really can’t go wrong in picking up a bottle or two of the 2005 while it’s still around, and in doing so you can thank the store for so nicely bottle-aging it for you! 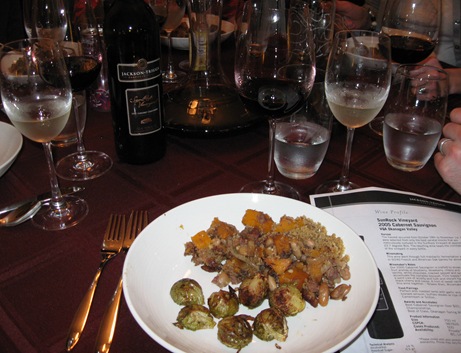 As we settled in our seats and enjoyed a second glass of Cabernet the conversation turned to dessert. In what had clearly become the theme of the evening Team Dessert pulled out two beautiful bottles of Hester Creek 2009 Late Harvest Pinot Blanc! Our dessert course took the form of very attractive individual-serving crustless cheesecakes, made with fresh Saltspring Island goat cheese and topped with wine-marinated crushed pineapple. With two bottles of Blanc on hand we relished generous pours of this charming concoction, one of the Top 5 Sweet Wines of the Year in the 2010 Canadian Wine Awards; and a steal at only $16 compared to the next lowest-priced competitor, a $40 Niagara icewine. The aromas and flavours of orchard fruit and honey meshed very well with the tart pineapple and tangy goat cheese; the clinking of spoons in empty bowls soon echoed around the table! 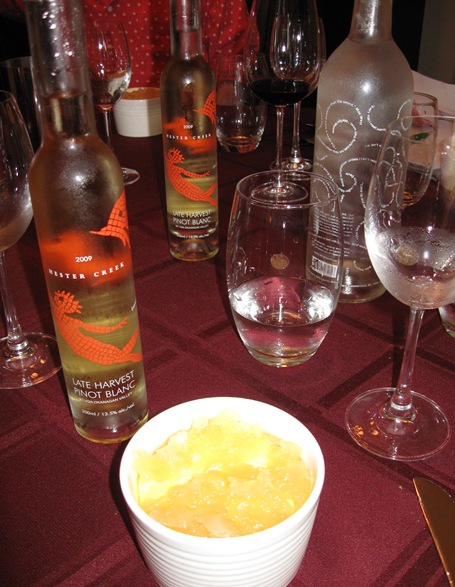 I’m already thinking about next month’s meeting, and moving on to dessert makes my thoughts turn to chocolate and Port…oh the possibilities!

Glad to hear our wines worked well with your dinner. Love the quote at the top of your page! Cheers, Steven Heiss