When we last saw our heroes they were leaving Village Wines Kitsilano and headed downtown. There was a Blasted Church tasting at Liberty Wines Robson I was looking forward to, and with our group now five-strong we rolled into Liberty’s snug surroundings to hear more about those wonderful wines. First up was the deliciously fragrant Chardonnay Musqué, an unoaked marvel that turns common notions of Chardonnay on their head. Blasted Church has earned a slew of awards for their 2009 vintage of this Chardonnay clone, including Best of Class at the Okanagan Spring Wine Festival, followed by Gold at the All Canadian Wine Championships and Silver at the Canadian Wine Awards. They only made 372 cases and are sold-out according to the winery’s online store, but I’ve seen a few bottles remaining in shops around town. The Musqué has very nice acidity to pair with food, and Blasted Church suggests some creative creamy seafood dishes.

In addition to the aforementioned Chardonnay there were also two reds from Blasted Church’s extensive portfolio present, starting with the unique red blend “Big Bang”. Big Bang’s predecessor was known as The Dam Flood, a blend of Merlot and the rarely-seen Lemberger. The 2008 Dam Flood took home a Double Gold (Best of Class) at this summer’s All Canadian Wine Championships, just shortly before Big Bang was released in July. The name change this year was the result of a dramatic reduction in Lemberger content due to winter damage, and thus Gamay and a bit of Foch was sourced to replace it. The newly-minted blend has pleasant mocha and vanilla notes with a toasty finish, and is a noble follow-up to the much-loved Dam Flood. Finally we tried the Blasted Church Merlot (2007); fruit-forward and smoky it was awarded a Silver medal at the Canadian Wine Awards.

If you are interested in learning more about Blasted Church wines I would highly recommend visiting their website: it is very well-put-together and provides full page wine profiles, plus detailed tasting notes and food pairings. The online store is excellent, and even indicates how many cases remain from the total produced for each wine. Release dates are shown for each wine, as well as anticipated dates for future vintages. As a student of wine websites I would rank Blasted Church at the top; they have done everything right and as a customer I am extremely impressed.

Our growth continued as we picked up a sixth team member when she finished work downtown, and we headed to our final destination at Taylorwood Wines in Yaletown. Along the way I took a detour to Okanagan Estate Wine Cellar, an out-of-the-way store found in the basement of The Bay. Okanagan Estate carries mostly Vincor wines such as Sumac Ridge, See Ya Later, and Nk’Mip; I’m assuming they have some sort of connection to the corporate parent. I was looking for new vintages of Jackson-Triggs Sunrock wines and stumbled upon a tasting of Nk’Mip’s new icon red blend called Mer’r’iym. This Meritage-blend comes from the 2008 vintage, and can obviously use some more aging, but tasted pretty great at the time. I needn’t go into extensive detail as John Schreiner has written an entire column about Mer’r’iym quite recently. Suffice to say, getting in on the ground floor of what should be a very successful new wine is a good idea in my book!

We finally arrived at Taylorwood to cap off the day’s excitement with a tasting of Quails’ Gate, one of my favourite wineries due to their high-quality portfolio and unique offerings including Chenin Blanc and Marechal Foch. We got to try the 2009 Chenin Blanc and it was great as usual. Quails’ Gate is proud to remind us that the 2007 vintage was served to President Obama during his first state visit to Canada, a pretty impressive achievement to be honest. Also available was the entry-level Chardonnay, a nicely balanced blend of tank- and barrel-fermented grapes that provides a good stepping stone to my favourite, the Stewart Family Reserve Chardonnay. Although the Reserve Chardonnay was not being tasted that day I’ve tried the Gold-medal 2007 vintage and was extremely impressed at the time, so much so that I bought two more bottles for my collection. I’ve also added the very well reviewed 2008 vintage to my collection as well. Following the Chardonnay we tried Quails’ Gate’s take on Foch, of which they produce three different wines: the “regular” Old Vines Foch, a Family Reserve version of the same, and a Fortified Vintage Foch in 375ml bottles. The regular Foch is meaty with a nice mouthfeel and some pleasant sage flavours. The Fortified Foch was also being tasted, of which I already had a bottle at home. It is produced in the style of Port, but is not as thick or cloying as you might expect; well-priced at $23 and worth a try, especially for those interested in BC’s small but growing fortified wine sector.

WIth a number of Quails’ Gate wines already in my collection I instead purchased a couple of new releases on my shopping list: Laughing Stock’s 2009 Chardonnay, and the long-awaited 2006 Pipe from Sumac Ridge. Pipe is Sumac’s take on Port; it is a delicious fortified red blend that we consistently enjoy with chocolate anything and everything! Sumac produces Pipe in 500ml bottles, unlike the more common 375ml size used for dessert wines, so you get pretty good value, plus the extremely classy bottles look great on the table. Pipe lasts nearly forever so keep one on hand for those special guests, or when you have a luxurious chocolate dessert that needs a partner! 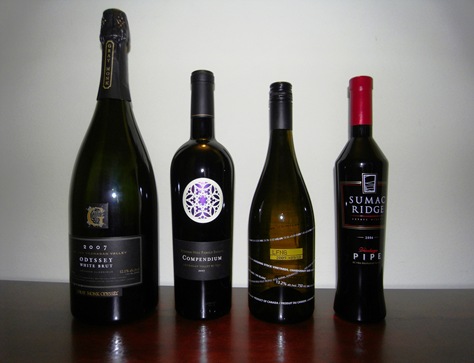