Our first full day of wine touring was set to be a busy one, with a couple of scheduled tastings plus a list of additional wineries at which we desired to visit and shop. The night before, we had returned from dinner at Miradoro to enjoy the view of Lake Osoyoos from our balcony at the Watermark Resort. Over beers and bourbon we hashed out our dining plans for the remainder of the trip: with three dinners remaining and three couples present, we decided to split duties evenly amongst us. Each day one couple would choose three required ingredients for dinner, another would do the cooking in our suite’s full kitchen, and the third would clean up; responsibilities would rotate so everyone got to enjoy all the roles. For the first evening’s dinner, my wife and I selected raisins, mushrooms, and cheddar cheese to be creatively incorporated into a filling meal after a busy day - it would prove to be the beginning of an entertaining culinary adventure! 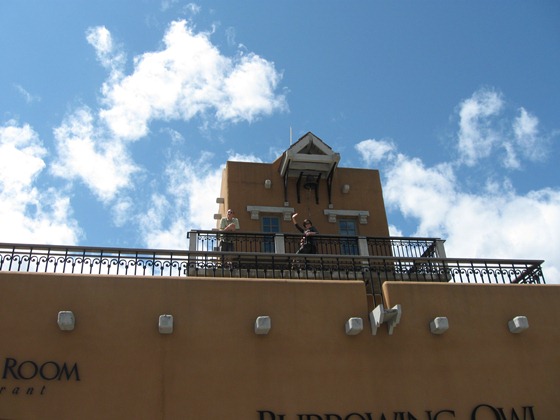 With two appointments in the afternoon our morning was flexible enough to allow for a leisurely start. Our appointment at Tinhorn Creek had been moved to the afternoon to better accommodate other scheduled guests, which we were happy to agree to, so we headed up the Black Sage Bench to start the day visiting the Burrowing Owl compound. Visible for miles, Burrowing Owl’s large winery/restaurant/guest house complex is set amongst seemingly endless vineyards, the view of which we enjoyed from their bell tower. In the tasting room we enjoyed a slew of wines, and picked up a bottle of 2011 Pinot Gris for near-term enjoyment. I myself finally got my hands on the 2009 Syrah, a juicy follow-up to the gold-medal-winning 2008 vintage. We all picked up bottles of the newly released “Coruja” fortified Syrah, made from three vintages so far (2008-2010), in the solera style. We didn’t know then how lucky we were to acquire this beautifully packaged wine, as it sold out only days later! 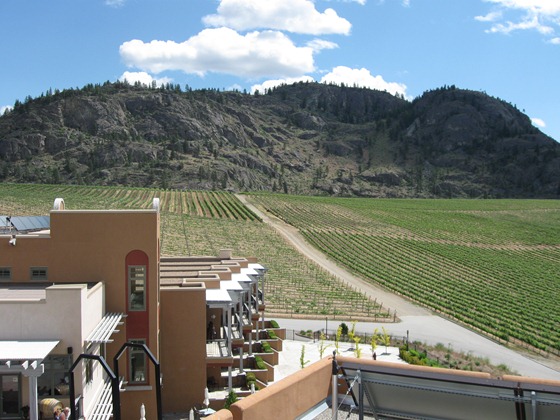 Admiring the beautiful Burrowing Owl property soon led us into lunch-time, and as tempting as the on-site Sonora Room restaurant was, we needed to be on the other side of the valley for our afternoon appointments. My suggestion of Hester Creek’s Terrafina restaurant was easily agreed upon, and we headed over to the Golden Mile Bench under similarly golden sunshine. The lunch crowd was just starting to arrive, and we luckily slipped in and shrewdly ordered just before another large party – as the pizza oven has limited space. A bottle of 8th Generation Integrity Frizzante plus various artfully-prepared sandwiches, salads, and pizzas left us all very satisfied; it was easily one of the best meals of our entire trip. We only had time for a quick trip up to the large tasting room and wine shop, but enjoyed trying the new 2011 Trebbiano, a unique treat bottled in an equally unique bottle this year. 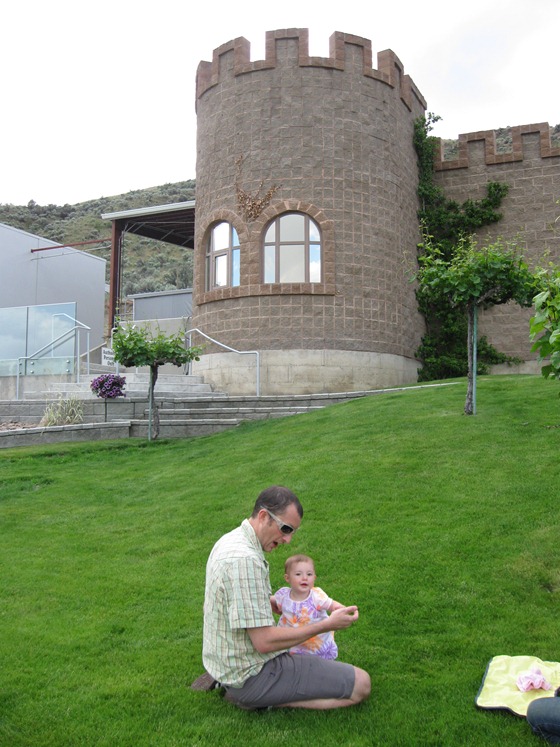 Our first official appointment of the day was at perennial favourite Road 13 Vineyards, where I looked forward to showing off the private Tasting Lounge my wife and I enjoyed so much on our wedding anniversary last year. Upon arrival it turned out we had “lucked” out as Luckhurst son Joe was on hand to provide us with a short tour of the sophisticated barrel room and a tasting of the broad Road 13 portfolio. With the Tasting Lounge to ourselves we chatted and sampled new releases and small lot wines such as Viognier, Chenin Blanc, Gewurztraminer, and Syrah. Seeing my dismay at hearing the 2009 Jackpot Chardonnay was sold out, Joe was happy to get the chance to sell me one of the last remaining bottles on site - which I discovered on display in front of the cash register. Additional purchases from our group included a half-case of brand new 2011 Old Vines Chenin Blanc, plus a couple bottles of related Late Harvest Chenin Blanc - 2% of the entire production run of only 100 bottles! Also going into the box were some Stemwinder, amazing Jackpot Pinot Noir, and a couple bottles of juicy 2009 Merlot Syrah, described as “golfer wine” - a big red that hits the spot after a day of golfing under the sun. By the time we were done we noted with bemusement that the day was still young and yet the cooler in the trunk was already overflowing.

It was soon time to head to our next appointment at Tinhorn Creek, although the group was happy to stop along the way at Cassini Cellars, directly alongside the highway headed north along the Golden Mile. I was hoping to get a bottle of the new varietal Cabernet Franc, but it was not yet released for sale, although I was pleased to see another new venture in the form of fortified Moscato. This 2011 dessert wine was awarded Double-Gold at the 2012 All Canadian Wine Championships, and was an easy purchase decision considering I’m always interested in unique dessert wines. I’d already acquired Cassini’s 2009 Syrah, Malbec, and Maximus red blend via Vancouver VQA stores, so I’m crossing my fingers the Cabernet Franc will make its way into stores as well, given the accolades and positive press it has received already. 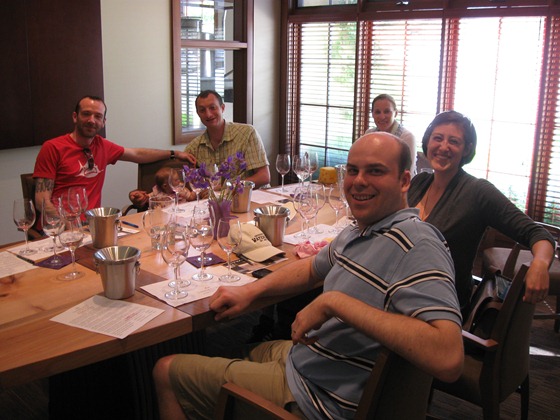 We arrived back at Tinhorn Creek’s property less than twenty-four hours after dining at Miradoro the day before, this time looking forward to tasting many more of the great value wines produced by Sandra Oldfield and her team. As a member of the winery’s Crush Club I was very grateful to have the opportunity to schedule a private tasting for us to ponder the wines in greater detail. Upon arrival we were pleased to meet the new Crush Club coordinator Terry Meyer Stone, who administers the new Crush Club Twitter account: @crushclubtcv. Terry showed us into the hospitality room where a member of Tinhorn’s talented Tasting Room staff was on hand to provide a guided tasting of the Varietal Series and the Oldfield Series wines. We enjoyed samples of the peachy Pinot Gris, the creamy popcorn-pairing Chardonnay, and the earthy (2008) Pinot Noir (the 2009 vintage is just now being released). The 2011 Oldfield Series 2Bench White and Rosé were both very enjoyably fresh and fruity, while the 2008 Oldfield Series Syrah showed off a very pleasant approachability. In particular, the milk chocolate nose and chocolate cherry flavours of the 2008 Oldfield Series Merlot left us swooning with delight. We followed up our delicious experience by browsing the well-stocked Tasting Room and embarking on the self-guided tour through the winery and wonderfully aromatic barrel room. With so many things to so and do (including a demonstration vineyard, and meals at Miradoro), Tinhorn Creek has become a destination in its own right!

Returning to Osoyoos that evening we took additional stock of our fast-growing mobile cellar, and sat back to see how the chefs would wow us with their culinary prowess. Before we knew it the bar had been set high indeed by our first team of at-home cooks, who prepared a beautiful cabbage coleslaw with the required raisins and cheddar, and then a massive mushroom risotto to make the rest of the challenge look easy! It wasn’t long before we had come up with another three ingredients for the following day, which would take place in a new venue as we moved north to Penticton and the Naramata Bench. 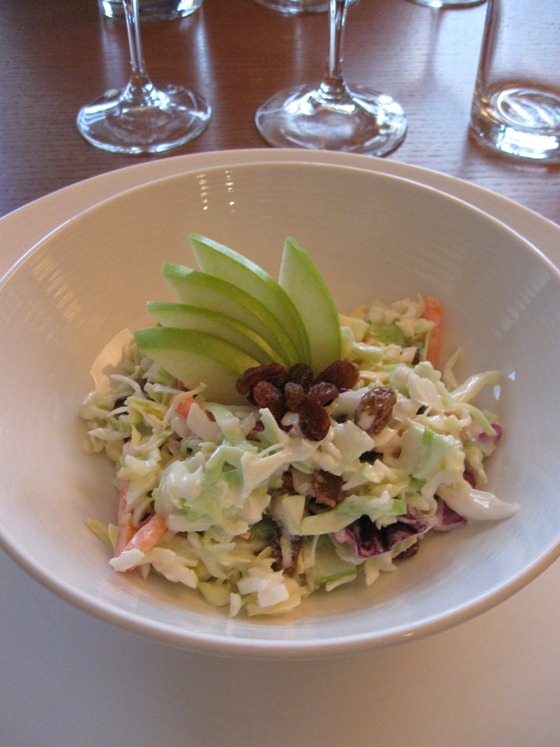