Before we knew it our time in Osoyoos had come to an end after two glorious nights at the Watermark Resort. Fortunately as the saying goes, “you don’t have to go home, but you can’t stay here,” and we were indeed not yet returning home, but moving up to Penticton and the Naramata Bench for two more nights! On Sunday morning we packed up a whole lot of wine, plus a whole lot of baby stuff, and headed north to Crooked Tree Bed & Breakfast in the hills high above Penticton. The drive was rife with detours, as we were passing many excellent wineries along the way. We started with LaStella, just outside Osoyoos, where we had an 11am appointment with Tasting Room Manager Jeff Stewart. 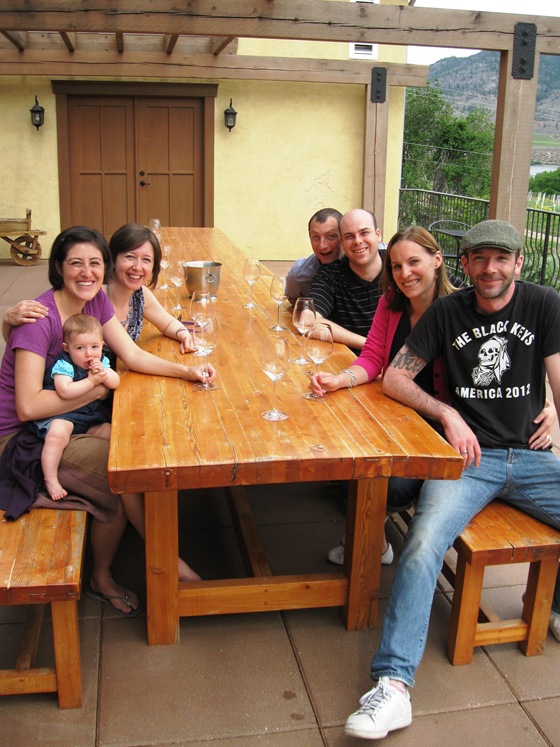 Jeff greeted us in the winery’s petite but beautiful tasting room before guiding us downstairs for a tour of the functional spaces. He graciously showed off barrels of highly exclusive, carefully screened wine on its way to becoming such luxuries as Maestoso Merlot and La Sophia Cabernet Sauvignon. Outside, Jeff pointed out some of LaStella’s estate vineyards while discussing the remainder of their vineyard sources and the zealous practices used to ensure only the absolute best grapes end up in LaStella’s wines (e.g., some vineyards are cropped as low as one ton per acre). The focus continues at harvest, where hand-sorting and hand-destemming are commonplace!

We soon found ourselves enjoying the patio outside the tasting room while Jeff went inside to fetch bottles of wine and varietally correct stemware for each. We spent the next hour discussing in detail and tasting with gusto the entire portfolio of LaStella wines currently available, up to and including the powerful and elegant Maestoso flagship wine. The newly released 2011 whites were clean and refreshing while complex reds such as the Fortissimo Super Tuscan blend kept the discussion intellectually animated as well. Jeff was even kind enough to walk us through a comparison of the 2010 and 2011 Rosés, to show the major vintage differences that have come about due to premature cessation of fermentation in the 2010 juice. Restarting fermentation by adding sugar and yeast was one option, but LaStella elected to simply let the wine express itself as it was, making for an unusually sweet but extremely honest release that year.

Before we knew it, two hours had passed at LaStella, and we had to force ourselves back onto the road to continue on our way, with many thanks to Jeff and more than a few bottles of new releases. Our purchases included the effervescent Moscato d’Osoyoos, as well as some of the incredible Casa Gusta organic Sicilian olive oil – easily the best I’ve ever tasted. 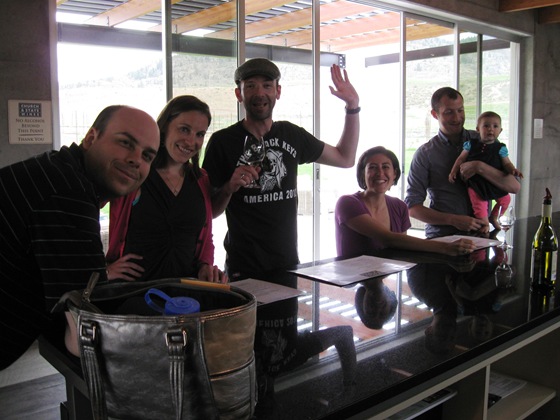 Having spent much of the previous day on the Golden Mile side of the valley, we elected to travel north via the Black Sage Bench. Over dinner the night before we had thoroughly enjoyed a bottle of Church & State 2006 Meritage (with nary a tannin to be found it seemed) so it seemed only natural for our next stop to be at Church & State’s beautiful Coyote Bowl winery and tasting room. My wife and I had enjoyed the stunning views and comfortable surroundings so much last summer we were eager to share this excellent facility with our friends!

The sleek tasting room and courteous staff were just as refreshing as we remembered, and we all tried out some of the new releases and old favourites. Fortunately due to some shrewd purchasing over the past several months I already have all the new reds, including the Coyote Bowl Cabernet Franc and Cabernet Sauvignon, but I was eager to see how the 2009 Syrah was doing since first tasting it last August. Named Canadian Red Wine of the Year at the 2011 Canadian Wine Awards, the Syrah has already matured away from some of the bloodiness we tasted last year, with plenty of dark fruit to keep the palate interesting. I’m amazed it’s not yet sold out given the great press it has received! 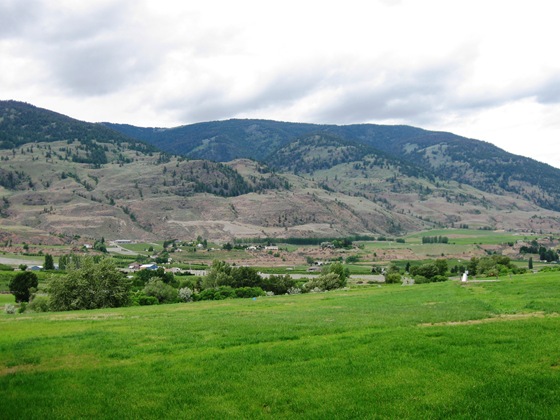 Outside on the patio we admired the view of the neighbours across the valley; Road 13 being fairly obvious with its juxtaposition of castle architecture and the gleaming glass of the new private tasting lounge. Last year we’d enjoyed a little picnic lunch on the Church & State patio while awaiting our turn at the tasting bar (the late August crowds being much thicker than early June), but unfortunately we needed to keep moving this time. After a few recommendations from the staff, including hints of curious hot pepper-infused wine, we decided to stop next at Silver Sage winery up the road.

The extensive and well manicured gardens at Silver Sage greeted us after we rolled down the winding driveway. The owners recently opened three luxury guest suites in their large facility, and I can imagine the relaxing garden views and secluded location away from the road would be extremely enjoyable! Plus, guests get to enjoy a complimentary bottle from the winery’s extensive portfolio, where creativity abounds! In addition to solid table wines Silver Sage also produce a wide range of dessert wines, including the aforementioned “Flame”, a hot pepper-infused late harvest Gewurztraminer that doesn’t pull any punches in the spice department! The infusion method also extends to a sage-infused Gewurztraminer table wine that would obviously compliment holiday meals like traditional turkey dinner (sage being a major component of poultry seasoning). 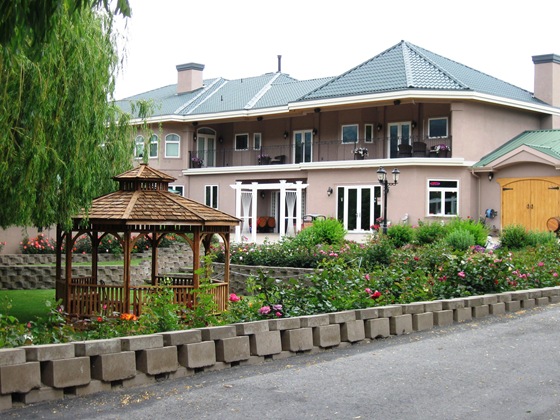 Almost a little shell-shocked from the flavour bonanza at Silver Sage, we took some time off in Oliver to experience lunch at Cantaloupe Annie’s after the carnivores grabbed pulled pork sandwich starter courses from Hammer’s House of Hog alongside the road. I myself was pretty hungry by that point, so I’m glad I didn’t have enough cash to be tempted by the intoxicating barbecue aromas issuing forth from that little shack!

After our rather late lunch, we got things moving quickly and skipped ahead to Okanagan Falls. Just south of town are a handful of excellent wineries, including Meyer Family Vineyards, Wild Goose, Stag’s Hollow, and Noble Ridge, but it was Blue Mountain on which I was focused. With limited time available we had to skip those other excellent wineries, but knowing how challenging it can be to find Blue Mountain’s wines in stores I wasn’t going to pass up a chance for some reserve selection “Stripe Label” Pinot Noir. After tasting through the other charming wines, including several whites and their very popular Brut Sparkling, my enthusiastic companions purchased well-priced ($80) magnums of the 2008 Stripe Label Pinot Noir. I myself acquired a single bottle – sadly, all I had room for – of the new 2009 release. Based on my experience last year, this vintage will almost certainly be sold out before the end of summer!

With the afternoon rapidly winding down, we needed to bypass any further winery visits for the day in favour of stopping for groceries and finding our Bed & Breakfast. The evening’s cooking couple had been assigned their three ingredients earlier in the day: strawberries, sunflower seeds, and pork belly (substituting tofu for the vegetarians) were to be on the menu that evening, while my wife and I had been assigned clean up duty. After the scenic tour of Penticton we settled on a grocery store, where the cooks picked up their ingredients and planned the upcoming meal. 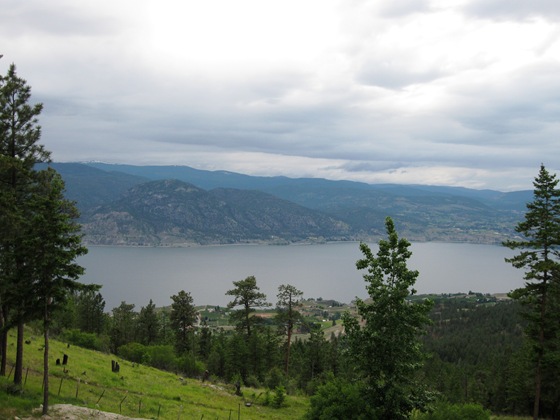 Fully supplied, we followed the directions far up into  the hills northeast of Penticton – fortunately well past the municipal landfill – to reach the stunning location and amenities of Crooked Tree. Host Alix was keen to show us around our suites and we all marvelled at the thoughtful little touches in place – like a fully stocked kitchen including popcorn maker and popcorn! With a view of the lake and myriad vineyards below the overcast skies did little to diminish our pleasure, and we enjoyed a delicious dinner of barbecued pork belly/tofu with strawberry sauce, smashed potatoes, and mixed green salad. I’d brought my last bottle of LaStella 2006 Allegretto Merlot with us, and despite not finding appropriate glasses until too late, we delved into the wine’s complexities as we recollected our morning visit to the winery. Sufficiently sated we spent the rest of the evening planning our final full day of wine touring, beginning with the Naramata Bench the next morning. 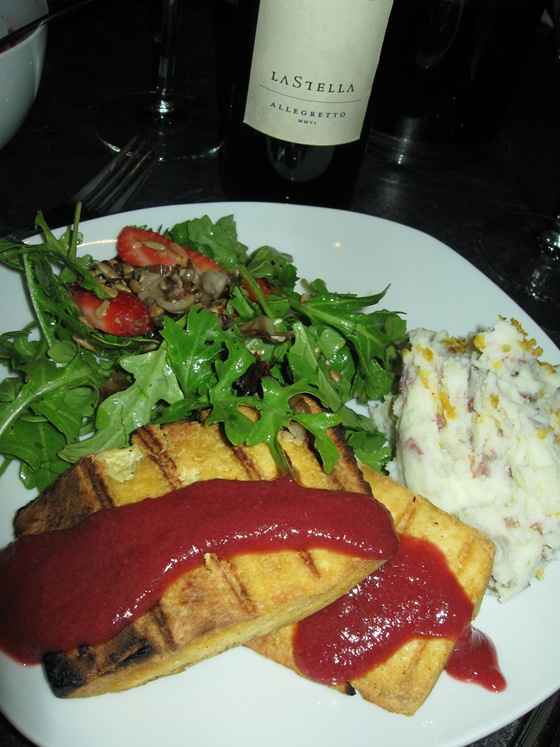