After a relaxing and romantic Sunday, our third day in Osoyoos was earmarked for a tour of the Black Sage Bench and further realization of an ambitious shopping list. We started out by finally visiting Moon Curser, having been either too late or too early for the tasting room the previous two days. The winery’s easily accessible location on the main road (Crowsnest Highway) in east Osoyoos offers admirable views of the rest of town and the lake; being just south of Nk’Mip, Moon Curser may hold the title of southernmost winery in the Okanagan! That hot southern location lets Moon Curser – formerly known as Twisted Tree – successfully grow tough-to-ripen varieties like Tempranillo and Tannat. In fact, John Schreiner makes it a point to mention that Moon Curser is likely the only winery in Canada growing Tannat! We were lucky enough to try the Twisted Tree 2008 Tannat alongside the newer Moon Curser 2009 Dead of Night, a Syrah-Tannat blend: the varietal Tannat was deep and dark, with a caramel mocha nose, while the addition of Syrah in 2009 added red fruit characteristics that reminded us of a balsamic fruit reduction. Having nearly the entire current portfolio in my cellar already we left with a bottle of the very small lot (60 cases) 2010 Chardonnay, produced from a Muscat clone that provides rich tree fruit flavours. 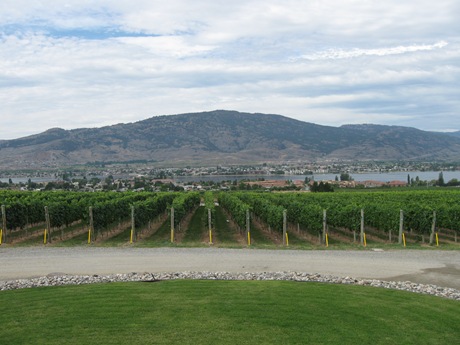 Heading north along the Black Sage Bench on the eastern side of the valley one of the first wineries is Burrowing Owl, set amidst 140 acres of vineyards that seem to go on forever. The Burrowing Owl complex also includes a restaurant and 10-suite guest house with pool, but it was their hard to come by wine I was there to procure. Specifically I was hoping to find a bottle of Athene, a new addition to the Burrowing Owl portfolio that blends their well regarded Cabernet Sauvignon with their equally popular Syrah. The wine came out last year but hasn’t been seen in any stores or even on the Burrowing Owl website. What it has seen are heaps of great reviews since, including praise from critics such as Anthony Gismondi, John Schreiner, and Daenna Van Mulligen. Unfortunately my hopes were dashed when the tasting room staff informed me it was completely sold out, with the last bottles having been earmarked for staff purchase (fair enough). Distracted, and a little overwhelmed by the crowds in the popular tasting room I neglected to even sample any of the other current releases, and eventually regretted not buying a bottle of the 2008 Cabernet Sauvignon while I had the chance: John Schreiner would only days later go on to say it is a wine that “would blow away a lot of California Cabernets.” 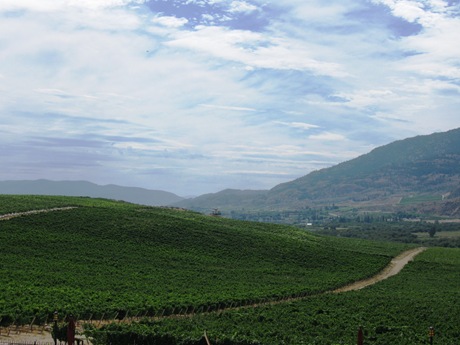 I was hoping our next stop would buoy my spirits and yield some cellar dividends, and I was not disappointed! Just up the road from Burrowing Owl is Church & State’s new Coyote Bowl winery, which I was eager to visit for the first time. The gorgeous and sleek tasting hall was quite busy, as patrons are seated on a first-come, first-served basis, so we took the opportunity to relax on the outdoor patio and enjoy stunning views of the Golden Mile Bench across the valley. With assurances that we would be seated in due time we enjoyed the picnic lunch we’d picked up at JoJo’s Cafe in Osoyoos that morning. Upon finishing lunch we were seated indoors and offered a selection of wines from Church & State’s extensive portfolio. With a cushion of lunch and plenty of time ahead of us we tried a number of wines, including Trebella – a delicious floral blend of Rhone grapes with a slightly oily mouthfeel and flavours of citrus and honeydew. The unique Cabernet Sauvignon Rosé was also poured for us, in both chilled and room temperature versions: the ruby grapefruit and cherry notes in the chilled wine yielded to deeper and richer expressions of Cabernet when the wine had warmed – an entertaining comparison. The new 2009 Chardonnay was also poured alongside the older 2008 vintage, which shows richer creamy popcorn flavours that lingered, whilst the fresh 2009 is more fruit-forward.

What really caught our attention at Church & State were two new reds from 2009 – the Hollenbach Vineyard Pinot Noir, and the Coyote Bowl Syrah. The Pinot Noir possesses a very expressive nose of savoury strawberries coming from a pale, slightly rusty wine which has some minerals on the palate. The new Syrah is a young, fresh wine with an inky colour: slight green, floral aromas follow-through to a dark bloodiness on the nose and flavours of plum and pepper – delicious! We left with various bottles in hand, as well as high praise for the professionalism of the tasting room staff: they were never intrusive or overly suggestive, allowing us time to taste the wines and come to our own conclusions – one of them being that Church & State really sets the bar for most of the other tasting rooms in the area. 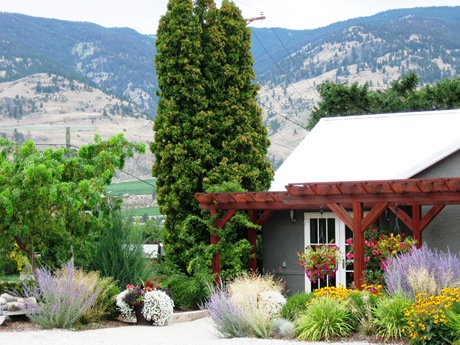 One of our final stops of the day allowed us to visit Stoneboat Vineyards, and sample their small but focused portfolio of whites and lighter reds (centered on various types of Pinots), including the relatively rare Pinotage grape. John Schreiner recently reviewed some of Stoneboat’s new releases, and pointed out that they are one of only a handful of Okanagan wineries growing this interesting grape. After admiring the beautiful gardens and relaxing surroundings we were pleased to meet owner Julie Martiniuk in the tasting room. With the winery having won what seems like a Lt. Governor’s award every year since opening, we looked forward to wines reflecting the Martiniuk’s long history of grape-growing and were not disappointed: starting out with the well balanced and very refreshing 2010 Pinot Gris, we followed it with a sweeter but equally tasty sample of 2010 Chorus, Stoneboat’s versatile six-grape white blend. A Rosé blend of Pinot Noir and Cabernet Franc kept up the refreshing theme as we moved on to the spiced cherry notes of the 2009 Pinot Noir – a flavour profile my wife likened to “Cola Bottles” (the candy). The 2009 Pinotage is a bright burgundy colour with prevalent aromas of red fruit and a spicy finish that for us emphasized flavours of chai tea. A couple of special treats finished the tasting, including the mouth-watering Very Late Harvest Pinot Blanc (2008), a special one-time release with spiced fruit sweetness and flavours of caramel apples that made a purchase an easy decision. Lastly, Stoneboat also produces an ice-wine called “Verglas” which is quite an intense experience, and well-priced at $33 for 200mL in a classy bottle.

The Black Sage bench is home to several other wineries, big and small and new and old, including Desert Hills, Black Hills, Silver Sage, Oliver Twist, Le Vieux Pin, and Quinta Ferreira. It’s quite easy to spend an entire day enjoying the beautiful scenery and exploring from Osoyoos up or Oliver down. The hardest part is deciding how many bottles to bring home with you! 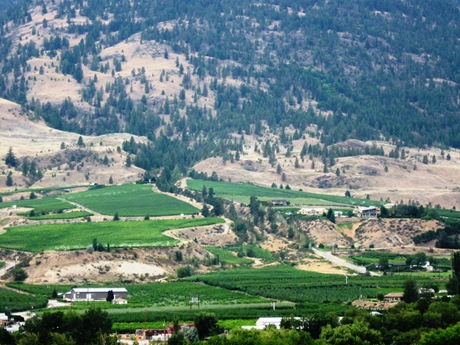 Church & State Pinot Noir (2009): Sadly the last Pinot Noir from this vineyard after disagreements ended the relationship that yielded a multiple-gold-medal 2007 wine. If Church & State decides on an estate-grown Pinot Noir in the future it will likely be substantially different in flavour profile, but no doubt equally well-made.

Church & State Syrah (2009): Follow-up to the 2007 wine that won Best Red at the 2009 BC Wine Awards (Okanagan Fall Wine Festival). Despite financial and space restrictions we had to get more than one bottle given the potential of this rich, dark wine.

Stoneboat Pinot Noir (2009): A third Lt. Governor’s Award for this small boutique winery shows they know their business! A relatively large production run of 1054 cases won’t necessarily last for long given the award, the very reasonable $25 price point, and it being described as “a charming wine…with a palate far richer than the colour suggests.”

Oliver Twist Syrah (2008): I had actually never heard of this young winery before the 2010 Canadian Wine Awards were published late last year. But when their 2008 Syrah won a Gold medal (one of six awarded in the category) alongside big competition like Jackson-Triggs and Mission Hill I immediately looked them up. It’s a smooth and fruity Syrah, with unique aromas of mango, plus soft blackberry flavours. Packaged under screw-cap it should retain the fruit for a while.

Quinta Ferreira Syrah (2008): Another recent Lt. Governor’s Award-winner, 625 cases were produced and local stocks seem to be running low since the award – I have only seen it in Kensington Square Wines. It has been very positively reviewed and should age well for the next couple of years at least.